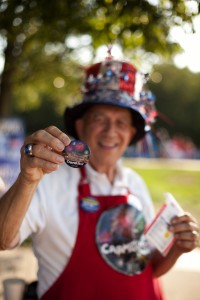 Since 1988, families have been enjoying the two-day Independence Day celebration, CarmelFest – an event with live music, delicious food and entertainment for all ages. This year will mark the celebration’s 25th anniversary, the “Silver Jubilation” CarmelFest.

While attending CarmelFest has become a tradition in most Carmel households, so has buying a Spark Button, according to Jeff Worrell,  the chairman of CarmelFest.

When Worrell introduced the community to Spark Buttons in 1994 to help raise money for the fireworks show, only a handful of buttons were sold. Since then, Spark Buttons has become a hugely successful campaign.

Jack Badger, chairman of Spark Buttons, has been helping in the Carmel community for more than a decade. Most Carmel residents may know Badger better through the Carmel Dad’s Club program. It was Badger who worked for 11 years on the Mark Badger Memorial Park as a tribute to his son, Mark. after he died.

“I am grateful for (Badger’s) dedication to the success of the program,” Worrell said.  “He has clearly helped sales grow.”

The first year light-up Spark Buttons were introduced, Badger handmade 25 buttons and raised $25 off of them; now, Badger leaves the light-up buttons to the professionals at Buztronics in Indianapolis.

Starting in January, Badger met with merchants to see whether they would be interested in being a part of the Spark Button team.

“Spark Buttons benefit both the merchants and the community,” Badger said.  “It’s a win-win situation.”

“By purchasing a Spark Button, people will be able to look up in the sky on our country’s birthday and say, ‘That’s mine up there, I helped pay for that one,’” Badger said, adding that locals will be able to see every firework shell if they can see the red, blinking light on top of the antenna tower next to the Monon Trail.

Last year, 240 buttons were sold. This year, Worrell and Badger are hoping to sell 3,000 buttons.

“Purchasing a Spark Button is a way for people to feel connected to the activities that take place,” Worrell said.

Worrell and Badger are hoping to see the number of buttons sold go from 3,000 units to 6,000 units in the next three years.

“I would like to look out onto the Gazebo crowd and see 9 out of 10 people proudly wearing a Spark Button,” Worrell said.

Badger and Worrell will be at the Farmer’s Market selling Spark Buttons every Saturday while wearing their famous patriotic hats; this year, Worrell revealed that he has made a light-up board that he will also be wearing.