You are at:Home»Current in Zionsville»Plan unveiled for Pittman property 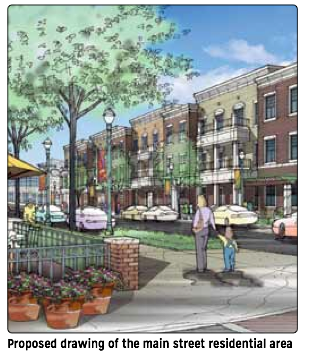 At the southwest corner of U.S. 421 and 116th Street (known as Sycamore Street or Ind. 334), is a 62-acre plot of prime real estate owned by the Pittman family where a red barn now stands. For years, many have wondered what would happen there, and last week a plan was submitted with the answer – The Farm at Zionsville.

This proposed development calls for a variety of uses that would include Michigan Road retail, a village core with a specialty grocer and attached residences, a professional office block along Sycamore Street and an estate residential area. There also are plans for a large block of open space and connectors to existing pathways to make it a pedestrian-friendly area.

“We want to create a welcoming place for people to live, work, shop and hang out as families,” Steve Pitman said. “We think of it as a gateway district. It will make a statement for Zionsville and will have a special look and feel.”

On May 14, papers were filed to begin the process of rezoning the land to a PUD – or a planned unit development. This plan is very different than the nearby proposed Walmart on Michigan Road which was rejected in February by the Board of Zoning Appeals because the building exceeded the size requirements of the ordinances. The Pittmans are well aware of the zoning restrictions and at this time are not asking for size variances, as Walmart did.

“We would like to have a specialty grocery store around 30,000 to 40,000 (square feet), so we are within the limit,” Pittman said. “What we’re trying to do is unique and a challenge. It’s a lot easier to slap on a large single use than to build an integrated development.”

The property is owned by Pittman Investors, LLC which consists of family members Scott, Mark, Steve, Chad and Anne. For more than a year, they have been planning for this project, traveling to collect ideas and data on other mixed use areas throughout the county and meeting weekly to move the project forward. There is already interest from prospective businesses in a specialty grocery store, medical practice and retailers but no commitments will be made until the development is further along. They hope to attract a variety of retailers and restaurants including a microbrewery, breakfast cafe, banks and more.

“We’re going to be patient with the process and find the right tenants,” Pittman said. “We don’t have to rush into anything that would be reckless.”

While developing the site plan, the owners also have intentionally considered how the noise and other issues that commercial development can bring will impact surrounding neighbors.

“My brother, Chad (Pittman) lives next to the property and will continue to live there,” Pittman said.

Initial reaction from a resident of the Timber Ridge neighborhood located adjacent to the proposed development is optimistic. Bret Brewer, a vocal opponent of the Walmart development, has property that overlooks the proposed Pittman project.

The next step is an appearance before the Zionsville Plan Commission on June 17 to request a rezoning of the property to a planned unit development and then the rezoning recommendation will move to Town Council for approval.

“We’re going in with a plan very carefully thought out,” Pittman said. “If everything goes well and there’s demand, we’ll break ground this time next year,”