You are at:Home»Current in Westfield»Laying the groundwork 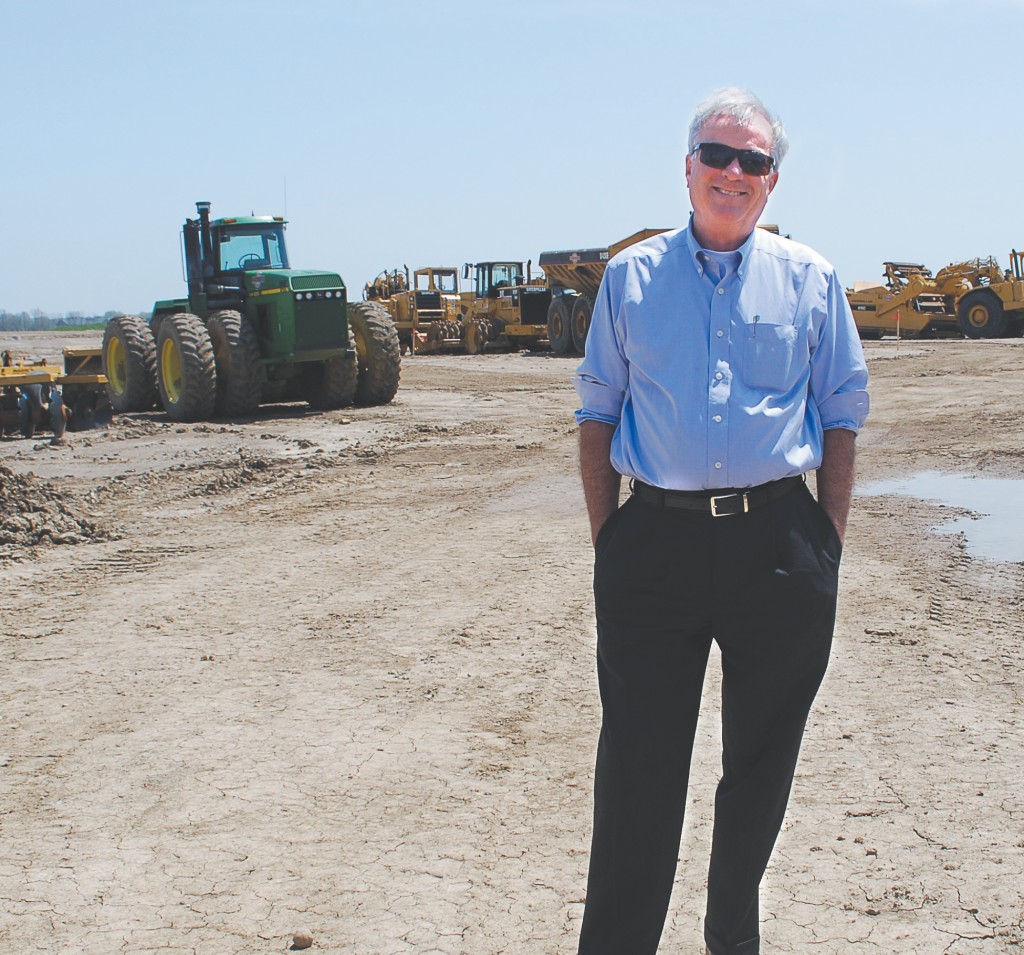 Now that the foundation is complete, visible work begins at Grand Park 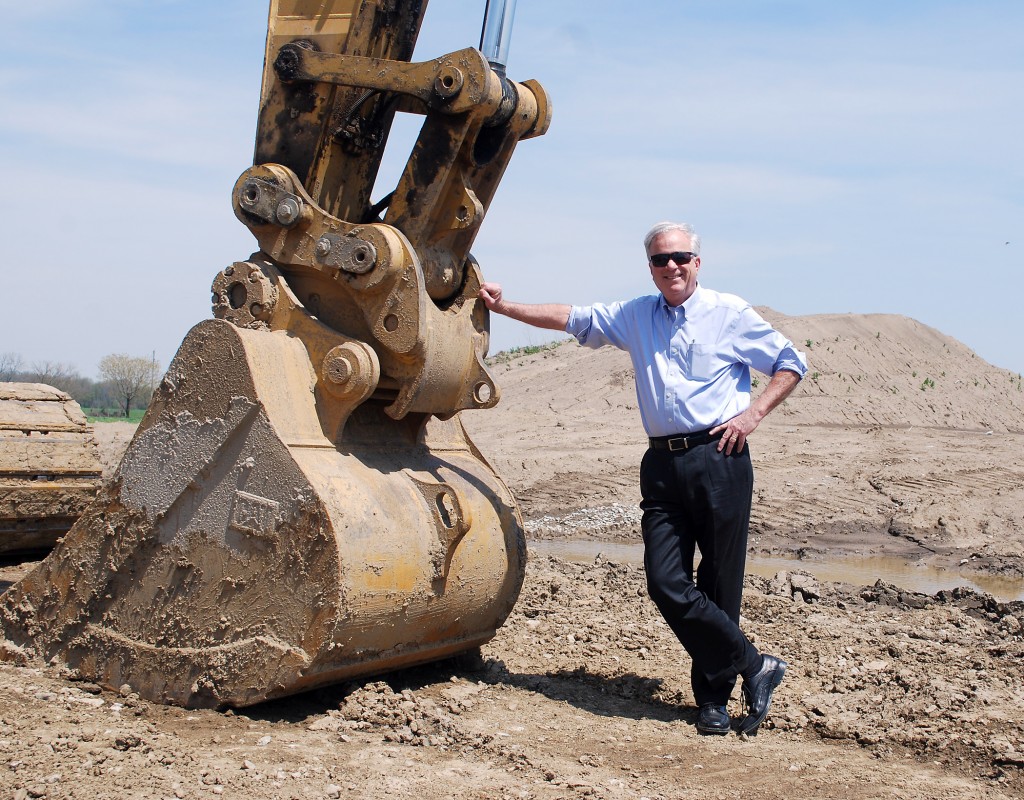 Grand Park will open in approximately one year.

Westfield Mayor Andy Cook said that despite the brown landscape full of mounds of dirt and construction equipment, Grand Park is on schedule and on budget for its opening in April 2014.

“Most of the work is underground. Next month you’ll begin to see it taking shape,” he said.

The work that already is done and hidden is the complex and connecting irrigation system at all fields. Cook said drainage is vital and the sports complex is designed to remove 2 inches of rain in four hours.

“It extends the availability of play,” he said. “The drainage of the field greatly determines the quality and longevity of the field and its ability to withstand play.”

Also installed this winter was a pedestrian tunnel, which will allow pedestrians to walk from the baseball side of the park to the soccer side without having to cross a roadway.

This summer is when the sod gets planted and Cook said the city has ordered 15 acres of grass from Wabash.

“There’s a small window to hit to plant sod. I don’t want to wait too late because the soil will get too hard, and it won’t root properly,” he said.

In addition to the sod, Cook said half of the fields will be seeded with Bluegrass and Bermuda grass, which takes less water and fertilizer and withstands more play and heat, Cook said.

“Bermuda is now the preferred surface of soccer,” Cook said. “One drawback is the aesthetic. Bermuda lays dormant until mid to late June.”

To make the fields look more appealing to visitors, rye grass will be planted annually to provide a green landscape until the Bermuda blades change color.

Artificial fields are being constructed professionally and are going to be installed within the next month.

“Artificial fields give us a great ability to eliminate canceling tournaments,” Cook said.

The next bid package includes a canvas top pavilion, addition lighting and more than basic landscaping. Funding for those items may come from naming rights and sponsorships. Cook said the city is looking for a title sponsor for the park and fields and a medical sponsor. A soft drink sponsor has been procured and will be announced shortly.

“The marketing of naming rights will begin this month,” Cook said. “We want to see their green and they want to see our green.”

Westfield Washington Schools also are working on naming rights and sponsorship for its new football stadium, but Cook said the city will not interfere as its search is for regional and national marketing.

Grand Park already has two major organizations signed up to be located there – Indiana Soccer Organization and the Indiana Bulls baseball team. Cook said the Bulls are building a 90,000-square-foot indoor practice facility and the ISO will have a 370,000-square-foot building with three full size indoor soccer fields.

“They’re designing that right now and going through the financial process,” he said, adding that both buildings will be built and paid for by those organizations and not the city. “A number of organizations have talked with both of our stakeholders about having events here.”

Cook said one of the selling aspects of Grand Park is that unlike other major tournaments, all games will take place in one location. Original estimates had 250,000 visitors attending Grand Park, but after hearing about interest from teams and tournaments, that number is now significantly higher.

“We think we’ll have 400,000 visitors in the first year of operation,” Cook said. “We’re quite ahead of schedule.”

The sports campus will be surrounded by dining, retail and entertainment venues, all geared toward supporting and enhancing the family sports atmosphere and experience. Hotels and restaurants are expected to be built in 2015 and Grand Park Village, which will break ground this summer, has a planned 2014 completion.

“It’ll happen once the folks are here,” Cook said. 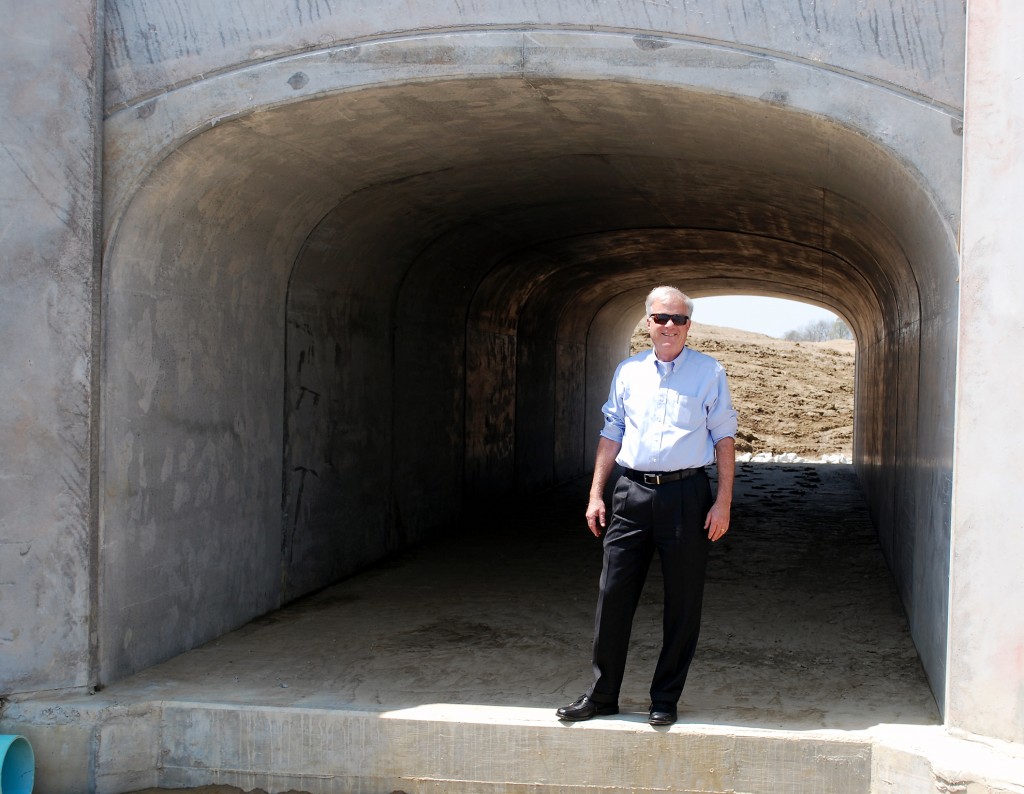 Westfield Mayor Andy Cook in the new tunnel that will connect the two sides of Grand Park.