You are at:Home»Current in Zionsville»Walkers hope to raise money, awareness 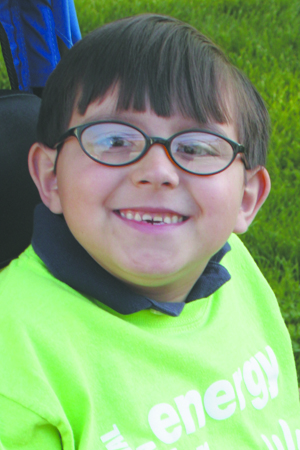 Anthony Serrano is your typical kindergartener. He loves going to school at Union Elementary, talking to friends and playing at recess.

But at just 18-months-old, Anthony was diagnosed with a type of mitochondrial disease called Complex 1, making his muscles weak, causing him to have low energy and making it difficult to digest food.

“When he was diagnosed with the disease it turned our family life upside down,” said his mother, Sarah Serrano. “Mitochondrial diseases are so rare, and so many kids have been misdiagnosed over the years. The most important thing to do is raise awareness and for people to know that Anthony and other children with the disease are normal kids.”

According to the United Mitochondrial Disease Foundation, there are many different types of mitochondrial diseases, but most result from failures of the mitochondria; specialized compartments present in every cell of the body except red blood cells. Mitochondria are responsible for creating more than 90 percent of the energy needed by the body. When they fail, less energy is generated within each cell, and cell injury and death can follow.

Anthony goes to school three days a week and will be participating with his family and hundreds of others in the United Mitochondrial Disease Foundation’s third annual Energy for Life Walkathon.

The event will take place May 18 at IUPUI’s downtown campus outside of Taylor Hall. Registration for the event begins at 10 a.m. and the walk will begin at 11 a.m. The Indiana chapter of UMDF is sponsoring the walk, and all proceeds raised will go toward research to help find a cure for mitochondrial diseases. While participants are encouraged to raise money, the walkathon is free to the public.

UMDF walkathon committee member Sandra Senetar will be participating for her second year in the walk with her niece, Megan Holt, who was diagnosed with a type of mitochondrial disease called Leigh’s Disease at the age of 2. She said that this year, $15,000 already has been raised, and they hope to double that amount by the day of the walk. Around 400 people are expected to participate.

“Mitochondrial diseases are more prevalent than childhood cancer, but most people don’t know them,” Senetar said. “There are very few doctors that specialize in treating it, and many aren’t educated on the disease. We’re raising money with the hope that someday there will be a cure for the disease.”