You are at:Home»Current in Zionsville»Robben Island a Cape Town must see 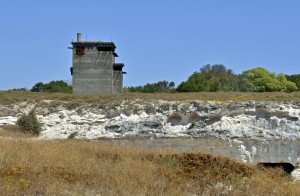 Robben Island prison was once home to Nelson Mandela. (Photo by Don Knebel)

Guided tours of notorious prisons can be entertaining, as known by anyone who has listened to the Beefeaters at the Tower of London. But a tour of the prison on Robben Island is a far different experience, providing insights about the man who spent 18 years there on his way to becoming the president of South Africa.

Robben Island is in Table Bay about five miles from Cape Town. Since the earliest days of the Dutch settlers, Robben Island has been used as a warehouse for people not wanted on the mainland. A guided bus trip around the island points out cell blocks and a cemetery for lepers that give silent testimony to the plights of people who lived and died there.

Today, Robben Island is known world wide because of a single prisoner. In 1964, Nelson Mandela was sent to Robben Island for his role in encouraging acts of sabotage against the white-only government. While there, he was consigned to the infamous limestone quarry a 20-minute walk from the prison. He was forced to work day after day against a bright rock face removing stone for use in island roads, with the glare and dust permanently damaging his eyes.

But Mandela did more than swing a limestone pick. He took control of the younger activists who were also there for participating in acts against the government. So influential was Mandela in teaching and inspiring these prisoners that Robben Island became known as “Mandela University.”  Perhaps to deprive the students of their teacher, Mandela was transferred to another prison in 1982, from which he was finally released in 1990 in an event televised around the world.

Former inmates now act as guides at Robben Island, showing visitors Mandela’s eight-by-seven-foot cell furnished with a bucket, a small table, straw sleeping mats and some blankets. They also tell stories about the lessons of discipline and patience they learned from the man who eventually became the leader of their country.

Cape Town is a beautiful and modern city, but it is the tour to Robben Island that makes a trip there really memorable.