You are at:Home»Current in Fishers»Statement trash 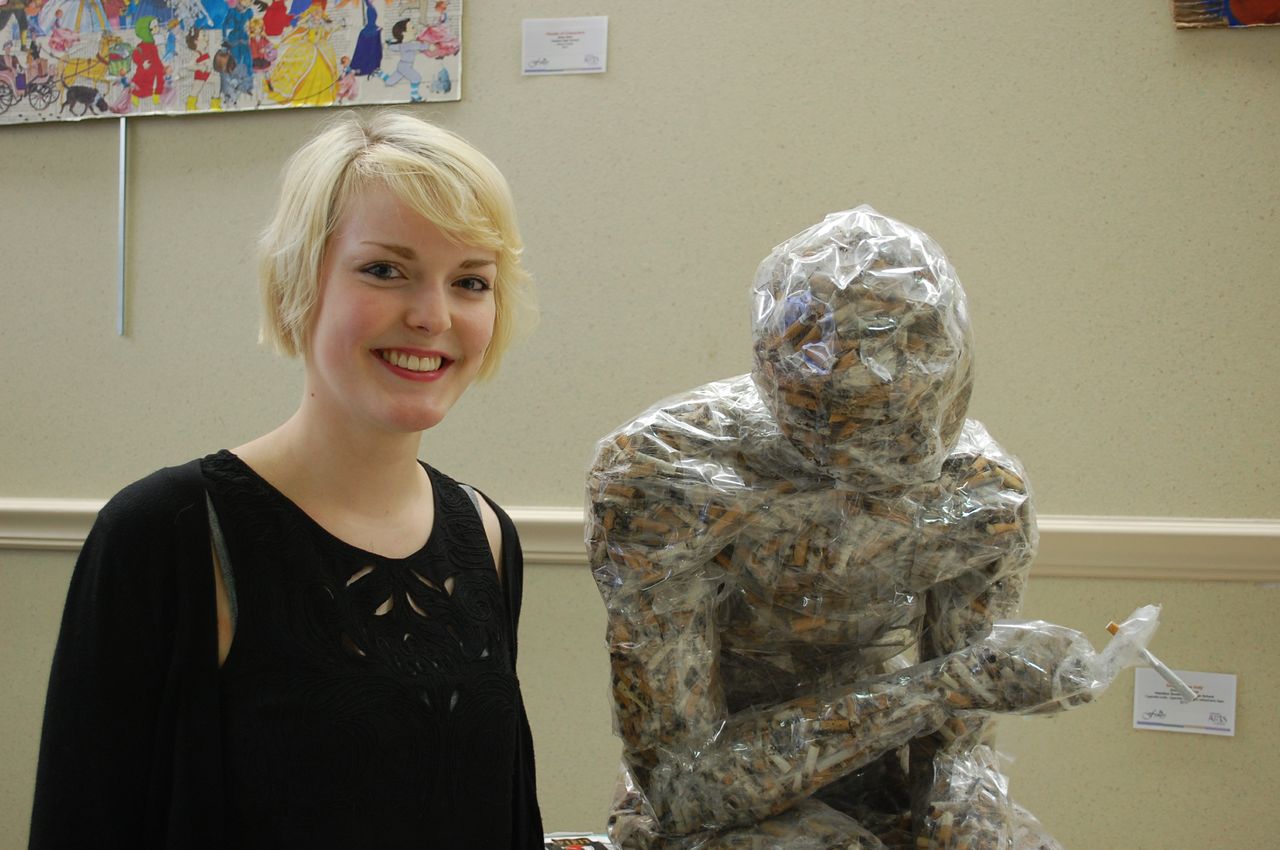 The most repeated element of Fishers resident Emma Benschop’s work on display this month at town hall is a cigarette butt.

Last summer, legislation that would ban smoking in many establishments, such as bars and restaurants, successfully made it through the statehouse and became a reality for much of Central Indiana.

“If you wanted to tag it in one line, it would be, ‘You are what you smoke,’” she said.

Her original inspiration for the project was a friend telling her she should create a sculpture of lungs made completely out of cigarettes after their social circle started noticing the amount of cigarette remnants cluttering the outdoor lounge area at a local Starbucks before the Smoke Free Initiative cleared the air.

She wanted to do something bigger than just lungs.

“I thought this is more impactful,” she said. “It fills you up as you do it. The more you smoke, the more smoke you have inside of you.”

Benschop, who will be studying art at New York University this fall, intends to make a statement with every piece of art she creates.

“Any time that art can communicate and say something to an audience, I think it’s even more meaningful,” Bob Gabbert, an advanced placement art teacher at HSE, said. “We can always look at work and appreciate the talents and the subject matter that goes into it. When it has a message, it’s more meaningful.”

Traveling to different spots around the area, including a WalMart for its cigarette disposal cones, Benschop slowly amassed enough burnt-out cigarettes to build a statement.

Weird looks and odd questions were a part of the experience, but Benschop said getting questions from and being approached by onlookers was rare.

She said one person at Starbucks inquired if she had a collection going, but that was the extent of questioning.

Utilizing a ton of tape and an Exacto knife, Benschop created a cast of herself one extremity at a time, with her sister helping out with parts like the arms.

The final product is a character sitting atop a seat made of cigarette cartons while smoking a cigarette.

Gabbert had a chance to see the piece up close and personal when Benschop finished it last year.

“She brought it in to finish it, and of course, the room just stunk,” he said.

Gabbert said as an AP student, Benschop had to complete three projects during the summer leading up to her senior year.

“Smoke Free Indy” was her fourth piece for the summer.

“The process was part of the art, too, Gabbert said. “The actions that she did and communicating with people about what she was doing, I think that was a beneficial experience of its own.”

The statement on smoking and its impact on the surrounding area is just one piece of a recurring theme Benschop worked on during the past year.

Benschop said her concentration was on consumer culture’s waste, with other pieces being made out of other widely discarded items like pen caps and burnt-out matches.

“I try to use materials that people generally just throw away when they’re done with just to show you how much we waste, because if I use a lot of one specific item, then you can see the volume of things that people just forget about and throw away,” Benschop said.

Favorite book: It varies, but two are “The Fountainhead” by Ayn Rand and “Never Let Me Go” by Kazuo Ishiguro.