You are at:Home»Current in Fishers»Sci-fi Stylist 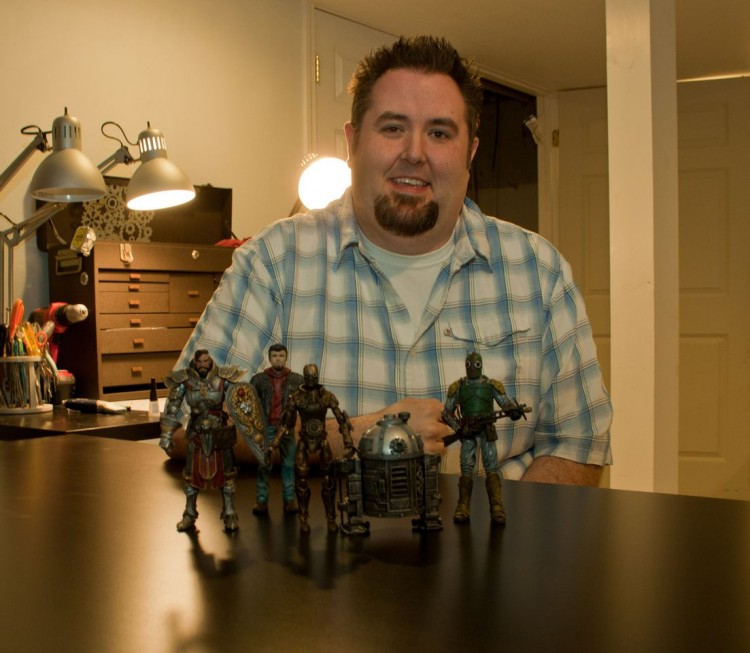 Just like a superhero out of a comic book, Jamie Follis lives a double life.

By night, he creates custom action figures inspired by pop culture icons that shape the stories playing out on today’s big screen.

Minutes at a time for the past 14 years, Follis has built custom figurines inspired by sci-fi epic and cornerstone “Star Wars” and comic book heroes and villains across the spectrum – from Batman to Hellboy.

Along with the customs, Follis cultivated a fan base that fights amongst itself to own his art on eBay, as well as relationships with unforeseeable consequences.

Actor and comedian Patton Oswalt (“Young Adult,” “The King of Queens”) recently unveiled a line of action figures that merge “Star Wars” with the styling of exploitation filmmaker Russ Meyer which he commissioned Follis to craft, and another line with a different theme is on the way.

Follis and Oswalt connected after a friend pointed out that Oswalt was tweeting about Follis’s repertoire of customs.

They chatted back and forth, and before asking Follis to build the “Faster Empire, Strike! Strike!” exploitation line of customized action figures, Oswalt decided he wanted his character, Matt Freehauf, in Diablo Cody’s 2011 film, “Young Adult,” to have the same hobby as Follis.

Oswalt said in a blog post that he sent Jason Reitman and Diablo Cody links to Follis’s work.

“It struck me as tragic and optimistic that a character as physically broken as Matt Freehauf would have, as a hobby, the customizing of action figures,” Oswalt said in the post. “A better set of legs here, a stronger torso there. Why can’t God do that for him?”

“I just thought it was awesome he’s in a meeting with Cameron Diaz and Diablo Cody and Jason Reitman showing them my web site,” Follis said. “I wish that he would have had me make the figures for him in the movie, but he wanted them to be not very good, like his character does it for fun.”

Follis makes the figures out of a need to create and build.

There is no blueprint. There is no drawing – just an idea as a starting point.

From there, Follis sculpts the character, sometimes making something from scratch, and sometimes taking parts from 30 to 40 other action figures to create an entirely new figure.

“I kind of like to take these discarded toys, break them down and make something new out of them,” he said.

Each character gets a three- to five-page back-story to fully flesh him or her out, Follis said.

His ability to create the figures not only garnered the attention of Oswalt, it put Follis on panels at last year’s Star Wars Celebration (which also included an opportunity to meet George Lucas), a commissioned line of figures for a TV pilot in the vein of Cartoon Network’s slapstick action-figure show “Robot Chicken” and deals to create small runs of figures for movies.

For such an involved hobby that’s gained him high-profile fans, it really is a second-life he quietly conducts.

Follis said he works on a handful of figures assembly-line style for a few minutes at a time when his daughter, Katie, and wife, Tammie, head to bed.

Going by his online handle, Sillof, he said very few realized he was the craftsman behind the figures.

He said the hobby never really crosses into the teaching realm, outside of conventions, with the exception of sometimes mentioning he likes “Star Wars” or a student unknowingly stumbling upon his work.

But even with the quiet, spare-time approach, family still plays a role in the hobby.

During his youth, Follis’s mom was supportive, and he and his father, a machinist, built replicas of “Star Wars” lightsabers to bond.

Now, a small chair sits on one side of his work station for his daughter to join him primarily during summer breaks. She paints statues, and they build Disney prop replicas together.

“I feel this need to be always doing something, whether it’s making models with my daughter or making the props,” he said.

Follis will be participating at a Star Wars festival May 4 at the Fishers Public Library, 5 Municipal Dr.