You are at:Home»Current in Carmel»Boston hits home 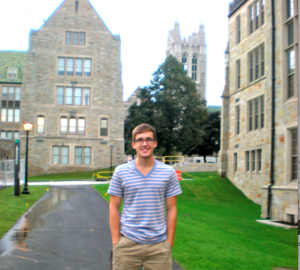 It was 3:06 p.m. last Monday when the first text came in. It read, “I just heard what happened in Boston. Is Nate ok?” I had not seen the news and quickly pulled it up on my computer. Breaking news reported an explosion at the Boston Marathon. Two bombs had been detinated near the finish and a third was reported later at a library downtown (although later corrected as an unrelated fire). My heart started to pound as it sank in. My son, Nate, a freshmen at Boston College, was planning to watch the race on the route which passed along campus. With the finish line only miles away and bombs still going off, I wondered where he was. Was Nate OK?

By the time I scanned stories online and looked down to text him, a text had already arrived. “Hey mom you will hear a tragedy happened at the marathon. I wasn’t there. I was in the library so I’m fine.” A huge sigh and feeling of gratitude to God overcame me at that moment. Nate was OK. But, moments later, I realized that many were not, and the images made me physically sick, angry, and questioning. Who could do something like this?

When I spoke to Nate last Tuesday, classes had resumed with an effort to return to normal, but students were still shell-shocked. Returning to class seemed impossible for many as their favorite day of the the year, Patriot Day, turned into a nightmare. In class, Nate said many shared their stories but appeared numb. Three students in his religion class were runners, one finished two minutes before the blast and two others were 100 yards in front of the second bomb when it exploded. After hearing the first bomb the runners were confused but forged on with the finish line in sight. But, the second blast confirmed it was an attack and his two classmates immediately turned around and ran as fast as they could in the other direction. They would never reach the finish.

My thoughts and prayers go out to the families, participants, and spectators whose lives will be forever changed by the 2013 Boston Marathon. I am grateful that my Nate was safely tucked away in the Boston College library writing a paper. He later told me that the paper was on Gandi, a champion for non-violence. How ironic, I thought, as bombs blasted only miles away.