You are at:Home»Current in Zionsville»Raising the Bar – The “park doctor” is In 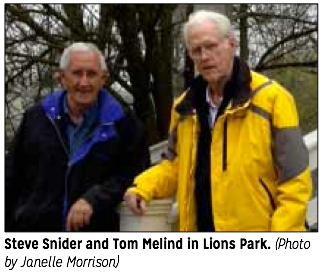 Tom Melind, a member of the Lions Club and a 23-year resident of Zionsville, has been at the helm of many community projects, the most notable being the redevelopment of Lions Park.

Melind moved to town in 1990 from Munster after securing a $1-million grant for that city’s park renovation.

In 1992, Melind undertook the daunting task of redeveloping the Zionsville Lions Park. Many man hours and materials were donated as a result of Melind’s outreach to neighbors and local businesses. For example, many, many loads of dirt were donated to help build up the park and today, park goers can enjoy the Dow AgroSciences pathway that connects to Lions Park.

Melind recruited fellow Lion Steve Snider with The Snider Group who also donated countless man hours and equipment that was necessary to complete the project.

“Tom roped me into a few of his projects,” Snider said. “When it was all said and done, it ended up costing nothing for my services but a $20,000 hot dog.”

After addressing drainage issues and installations of a parking lot, playgrounds and new ball fields, the final park improvement project cost was $600,000, not including the in-kind donations and volunteer hours that were coordinated by Melind.

In 1997, Melind and Snider repeated their success at a neighboring club’s park in Whitestown. Other refurbished parks directed under Melind include ones in Advance, Michigantown, Lizton, West Point and Clinton. In 2006, Melind wrote, “Park Doctor, How to Revitalize you Park.”

Melind also has been an instrumental figure in fundraising and awareness in other areas. He sits on the senior advisory council at the Hussey Mayfield Memorial Public Library, Boone County Senior Services Group and was a co-chair for the grand opening of the Zionsville Performing Arts Center.

Melind has been awarded several honors including, the 2003 Sagamore of the Wabash, the highest honor bestowed by the governor of Indiana for distinguished service to the state.

“I am just the enabler,” Melind said. “I enable people to make a contribution, and that’s the fun of it.”