You are at:Home»Current in Zionsville»Centuries-old karate lessons 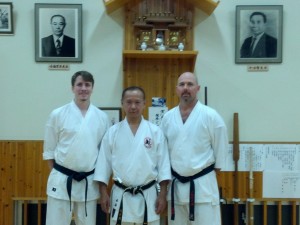 Although owner of Okinawan Karate Jerry Hansman has been teaching the martial art for 30 years to students of all ages, he is never finished learning.

Every year, Hansman travels to the Japanese island of Okinawa to study for 10 days under his 88-year-old sensei, or Japanese karate teacher, who has been practicing the art since the age of eight.

“There is never an end in sight to learning karate,” he said. “I’ve been doing this for 40 years and still learn new things. It still excites me, keeps me in good shape and lets me interact with a lot of different people.”

Most of the time, Hansman makes the yearly journey to Japan alone but has taken his 13-year-old daughter Hannah and studio instructors in the past. This year, he invited along 22-year-old Zionsville High School graduate Ben Evenson, who has been practicing karate under Hansman since the age of 10 and is now employed as a full-time instructor at the studio.

“The Lil’ Dragon classes are about teaching kids the basics of karate and life skills; how to deal with and avoid strangers, self-control, concentration and self-discipline,” he said.

With the average class size around 20 students, Hansman is always focused on keeping the art authentic. While there are many different styles of martial arts, karate is authentic to the island of Okinawa and Hansman always stays true to tradition.

“I train my students the exact way my sensei teaches me. He has been training for 80 years and trains me the exact way he was taught, so every one of my students is getting the true essence of karate,” he said.