You are at:Home»Current in Carmel»JoAnn Fowler Combs Named CICOA 2013 Caregiver of the Year 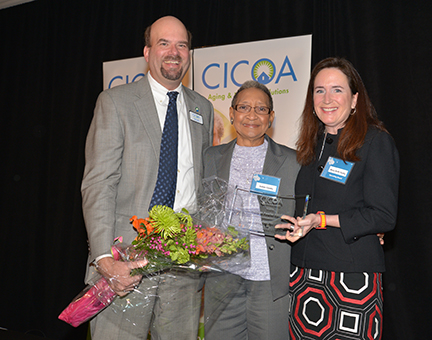 “Caregiving requires a tremendous personal sacrifice of time and resources,” said CICOA President and CEO Orion Bell IV. “This award was created to shine a light on caregivers like JoAnn Fowler Combs who willingly and compassionately take care of their loved ones despite the strain caregiving may bring to their own lives.”

Combs is one of the estimated 65.7 million people in the United States who provide care for an elderly or disabled family member. Because of caregivers like her, individuals are able to stay in their homes longer and lead lives of dignity and independence.

“Taking care of people—from the youngest ones to now older adults—it’s been a journey, but also a gift from God,” said Combs.  “And to meet so many people in the community who are involved in the same mission of caregiving…it was a blessing to be there and to receive this honor. It’s something I never dreamed of.”

Combs’ daughter, Patrice Searcy, nominated her for the award.

Searcy said, “My mother truly epitomizes selflessness, courage and strength. She is more than deserving of this recognition and so much more.”

Widowed at age 32, Combs raised her two children as a single parent, owned her own business, and served as a daycare director at two area centers while selflessly caring for many members of her family, including her mother and second husband until their deaths. Later, she tended to her former son-in-law for four months after he had a debilitating stroke.

In 2006, Combs began taking care of her sister who is paralyzed and suffers from mental illness, as well as her first mother-in-law, who suffers with Alzheimer’s disease. Combs currently provides their personal care, cooks their favorite meals and takes them to doctors’ appointments. Her mantra of service does not stop with her own family. She also serves on the Parish Council of the St. Rita Catholic Church, and she is Grand Lady (president) of the Knights and Ladies of St. Peter Claver.

In its fourth year, the annual Signature Breakfast drew 420 people and raised $79,942. Out of every dollar donated, 91 cents goes directly to client services, Bell said. Donations are used to provide respite care to area caregivers, client assistance, and support additional CICOA programs like Meals & More, which provides half a million meals annually to eligible seniors and those living with disabilities.