You are at:Home»Current in Zionsville»Stop Sexual Abuse

During the past two years, local child advocacy center Chaucie’s Place has shifted its focus from trauma minimization to sexual abuse and youth suicide prevention. The organization recently launched its latest program, Lifelines, aimed at preventing youth suicide and extending its reach into Boone County and Zionsville Community Schools. 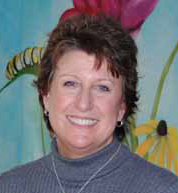 “Reacting is so important, but at the end of the day, if you can prevent harm from coming to our children in the first place, there is no greater calling,” said Toby Stark, Chaucie’s Place’s executive director.

Body Safety, Chaucie’s Place’s first program, has been a part of the organization since 2001. It is aimed at young children in kindergarten, second and fourth grade. The program is being implemented into the Zionsville Community School curriculum and will begin next school year.

“ZCS school leaders, PTO Council leaders, Board of School Trustees members, and I have met with Chaucie’s Place leaders regarding Stewards of Children and Body Safety,” said ZCS Supt. Dr. Scott Robison. “All of our counselors and many other lead staff have been trained, and we look forward to working with Chaucie’s Place professionals in the fall as we introduce the Body Safety program in parent informational meetings.”

Body Safety is Chaucie’s Place’s most successful program and has been implemented in all of the Hamilton County school districts, even reaching into Marion County in recent years.

In 2010, the Chaucie’s Place staff became authorized to train parents and any adult working with children as part of Stewards of Children, a national child sexual abuse prevention program designed to educate adults about how to prevent, recognize and react appropriately to child sexual abuse.

“All of our counselors and a number of administrators have taken part in the Stewards of Children prevention and response program for adults,” said Cathy Fuelling of ZCS’s Unified Student Services. “We all found this presentation to be extremely valuable in helping us to understand the complex issues related to child sexual abuse and how to approach these issues directly and with sensitivity.”

Beyond this month’s annual breakfast event, Stark hopes to continue to grow Lifelines and the other prevention programs throughout the surrounding communities.

Chaucie’s Place will be holding its annual Beach Bash fundraising event in October. With admission of $75 per person, Stark is expecting to see more than 250 people at this year’s event which will feature a luau theme.

“Traditionally, we have had a speaker (for this event), but we are going to be looking at changing things up this year,” said Stark, smiling. 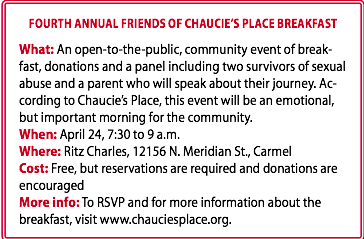