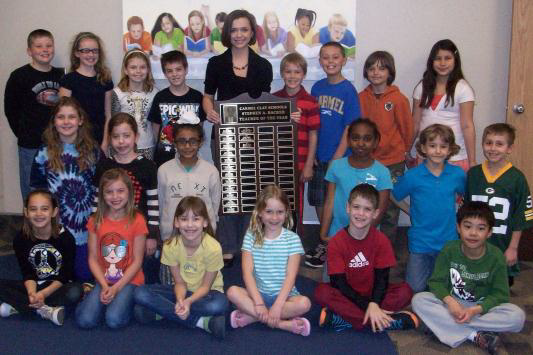 In a surprise ceremony on April 15, Renee White, third grade teacher at Carmel Elementary, was announced as the 2013 Stephen A. Backer Teacher of the Year for Carmel Clay Schools (CCS).

Susan H. Backer, widow of Mr. Stephen A. Backer, and Dr. Jeff Swensson, CCS Superintendent, surprised White and her colleagues by making the announcement at her school.

Through her numerous nominations, White was described as “gifted in all domains of education, including the areas of student/parent relationships, planning/assessment/instruction, and leadership.” White will now represent CCS in the state Teacher of the Year competition.

“Ms. White symbolizes the great teaching that occurs every day throughout the Carmel Clay Schools. Her use of best instructional practices, her creative engagement strategies, and her genuine regard for her students illustrate her above-and-beyond approach in the classroom. Our school corporation is very proud of the exceptional professionalism of Renee White.”

To read about previous CCS Teacher of the Year winners, please visit http://www1.ccs.k12.in.us/district/about/toy.