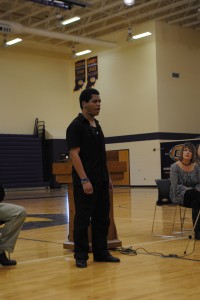 Micheal Peterson performs “Get it Right” for the faculty, staff and students of Guerin Catholic High School.

On March 22, Guerin Catholic High School hosted a Respect Rally to help raise awareness for those with special needs and to build awareness for society to stop and think about its use of the “r-word” – retarded.

Some of the speakers at the assembly included Best Buddies participants and Special Olympic athletes: Amanda Armstrong, Mary McClamroch, Matt Yacone, Michael Peterson and Andrew Peterson. Each speaker spoke of the strength and courage Best Buddies and the Special Olympics has given them.

Participant’s also spoke of the respect they have been lacking throughout their lives.

“We don’t ever want pity, rather we need your respect,” said Andrew Peterson, a Special Olympic Indiana athlete. “There is more to winning. We get the chance to improve, feel good about ourselves, show everyone that each person is not a nobody but a somebody.”

Michael Peterson, Andrew’s younger brother, and also a Special Olympics Indiana athlete and vocalist, sang a song from the hit television show Glee, “Get it Right.” The students gave him a standing ovation.

Each speaker talked of their hope to one day eliminate the retarded from the English vocabulary. The best buddies spoke about their struggles with earning the respect of others.

Throughout the week, students signed a banner taking a pledge to “Spread the Word to End the Word.” Some of Guerin Catholic’s own students who are in the Learning Difference Program also spoke of their struggles with learning disabilities such as ADHD and dyslexia.

The students of Guerin Catholic High School pledged as a school to eliminate the “r-word” from their vocabulary. At the end of the assembly, students were given wrist bands to remind themselves of their commitment.