You are at:Home»Current in Fishers»Life-changing 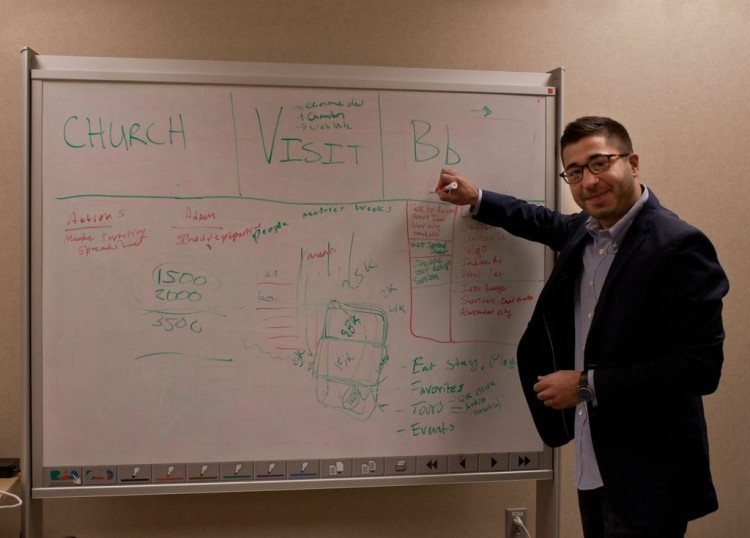 He convinced his father they should skip church and finish building a tree house. As they toiled, gunfire rang out at their house of worship, which was quite close to their home.

Going up to the third floor of their house, Jaramillo saw army trucks, but in reality, the trucks carried guerrillas who were there to kidnap more than 100 members of the congregation.

It was at that moment his father decided to move the family out of Colombia and away from the political turmoil and into the United States.

“My life would be a lot different if I didn’t build that tree house that day,” he said.

Now a founder and CEO of his own company, BlueBridge Digital, as well as a self-described rebel, the Fishers resident stands poised to build a lasting enterprise, make a difference in the lives of others and make a case for the American Dream in the 21st Century economy.

Jaramillo, the son of a businessman, was on the entrepreneur’s path long before his family was uprooted, towing jugs of water in a Radio Flyer wagon from the delivery truck to his neighbors’ doors for a buck.

The wagon would eventually be replaced by the iPhone, but it was a long journey.

Fighting to break down the language barrier, shock and other students were all parts of his early years in Ft. Lauderdale, Fla.

After the move, he said he was in shock for about one year, and once it wore off, he chose to “reinvent” himself, and with much anger replacing the void, he got mixed up in the wrong crowd.

Jaramillo said when other children harassed him, he couldn’t fully verbally retort and resorted to using his fists instead, landing him in suspensions and an alternative school.

Recognizing he hit a low point, Jaramillo reinvested in himself and in his faith, becoming a straight-A student. He was a secret nerd the whole time, reading book after book, he said.

By the time he started eighth grade, Jaramillo’s father wanted to move the family back to Colombia. A deal was brokered for Jaramillo’s stay in the United States: He had to get a college scholarship.

According to Jaramillo, he placed high enough on the SATs to earn a scholarship to a private high school. His father said that didn’t count, but he was able to prove the high scores translated to a college scholarship.

During his high school education, he was pushed to apply to major schools, including some in the Ivy League.

Invitations from programs like Vanderbilt and Wake Forrest, and at least one Ivy League school (Jaramillo said he can’t remember which, at this point) were rejected by Jaramillo.

Instead, he chose Indiana Wesleyan University.

“I loved Indiana for how friendly the people were,” he said.

He graduated Wesleyan as the school’s valedictorian and got a head start on his own business, BlueBridge Digital, after falling in love with technology while interning at marketing juggernaut ExactTarget.

He turned down an Orr Fellowship – a prestigious route with a period of guaranteed employment – to work on the company, which he said he struggled to get moving during one summer.

“While I think (the Orr Fellowship) is just an amazing program, it just wasn’t the time for me,” he said.

Jaramillo’s BlueBridge Digital is a mobile app developer that twists the typical business model for the industry. Instead of paying for an app, BlueBridge’s customers pay a monthly fee for the app and any additional maintenance, features and updates.

They work with convention and visitors bureaus, universities and churches all over the United States, and the business has grown to 10 employees.

Jaramillo said BlueBridge met its first-quarter goals, with the ultimate goal being to broach a seven-figure income by the end of the year.

He said he wants BlueBridge to be a sustainable business, not a flash-in-the-pan that is sold quickly.

Though quite far from Colombia, where Jaramillo said being born into the right family could mean the difference between hope and hopelessness, the thoughts of class immobility are part of what pushes him toward success.

“A huge passion of mine is to go and help that situation so that those kids, through education, can have hope,” he said. “And the funny thing is that the world runs on money, and money is what gets things done.”

Translation: BlueBridge’s success could mean hope for others.