You are at:Home»Current in Zionsville»What does a Jesuit Pope mean? 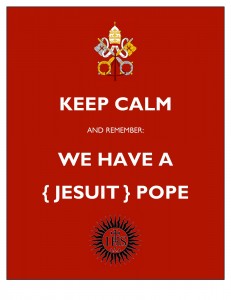 When most of us think of the Jesuits, or as they are officially known, The Society of Jesus, we probably think of Brebeuf  Jesuit High School on 86th Street. Or maybe if we are more March Madness inclined, we might think of Jesuit colleges like Georgetown, Saint Louis and Marquette, hoping they haven’t busted our brackets yet. Or maybe we think of the stories about the Jesuit missionaries to the Americas, St. John de Brebeuf being one of them. Or we might think of the teachings of their founder, St. Ignatius of Loyola.

But, before we ever head the name “Pope Francis,” we would have never, ever thought of a Jesuit as a Pope. Those simply did not mix.

“St. Ignatius wanted to keep his early companions from even being elected bishop, so to be elected Pope is definitely beyond that,” Adam Carrico, a third-year theologian at Saint Meinrad Seminary, said.

But, would you just believe it? A Jesuit is currently celebrating his first Holy Week as the Pontiff.

So what does having a Jesuit Pope mean for the Catholic Church?

Any member of a religious community is defined by their community. This is the same for the Benedictines, the Franciscans, and in this case, the Jesuits. Pope Francis was raised in that tradition, and he embodies three of the Society’s major pillars.

He championed the poor in Buenos Aires, by not living in the Bishop’s Palace and not owning a car, opting to ride to work with the average Joe. He also called for more awareness of poverty in his first homily as Pope.

He has a deep passion for evangelization, which he addressed from the Vatican’s balcony. Not only adding more Catholics, but more importantly positively educating everyone on what the church is actually teaching.

He has a long and public track record of defending the church’s teachings against most notably Argentina President Cristina Fernández de Kirchner.

And, surprising or not, these are all pillars the church has long supported.

So will Pope Francis give the church a new facelift and bring about a major change in doctrine?

No. But what he will do is bring about a heightened emphasis on the problems of poverty.

After all, he isn’t just a Jesuit anymore. But he will remain influenced by his Jesuit heritage as he becomes the Pastor to the Nations.