Ross Moffitt ends his 50-year career as a barber 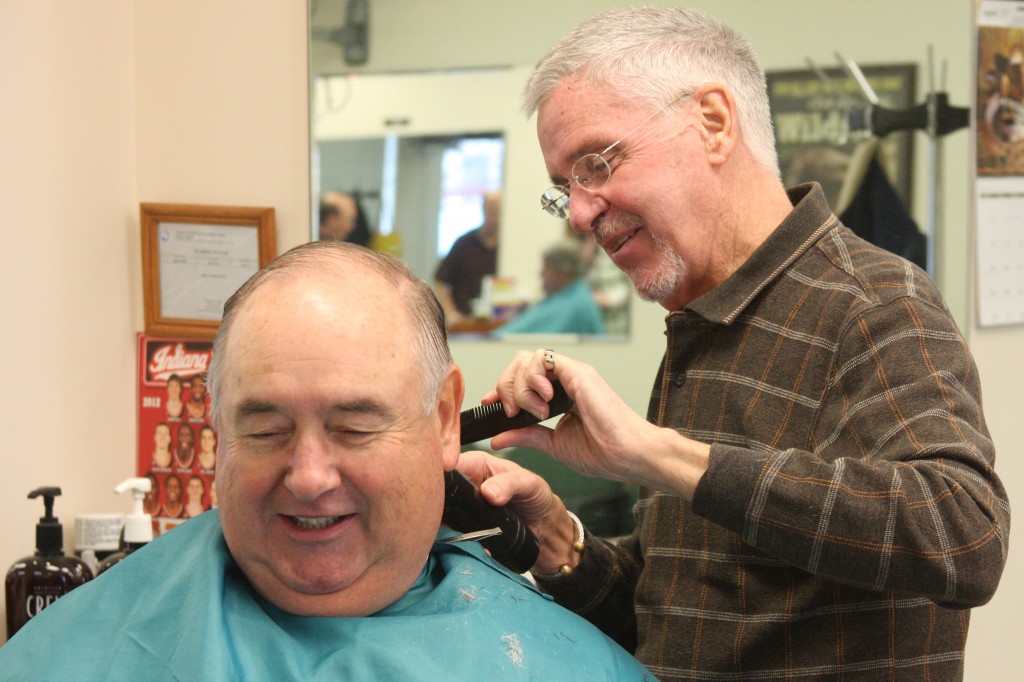 After nearly 50 years of cutting hair, a local barber is getting ready to put away his scissors for good.

Ross Moffitt, 74, estimates he’s given nearly 300,000 haircuts during his career, but now it’s time to enjoy some travel and lots of 36-hole days on the golf course. His last day will be March 27.

After spending the first eight years of his career in an eastside Indianapolis barbershop, the Carmel native returned home to cut hair. He’s remained a fixture at Butler Barbershop since the early 1970s, cutting three generations of hair.

Moffitt broke the news to regular customer Jim Schneider when he sat down for his Monday appointment. Schneider, a customer since the nation’s bicentennial, was disappointed, “He’s given me the best haircuts I’ve ever had,” he said. And soon the conversation drifted to earlier times. It might not be the most politically correct admission, but both reminisce about the days when the barbershop was more of a boy’s club.

“It used to be only guys who came in,” Moffitt said. “There’d be a lot of jokes going around, but you don’t hear many of those anymore. No one has time to sit around and talk anymore.”

Many of his customers are from that bygone era, Moffitt said.

“They’ve been coming to me for a long time,” Moffitt said. He pointed to the floor, where a few stray locks of hair were scattered across it. “A lot of these guys have salt and pepper hair … probably more salt than pepper now.”

Moffitt attributes his success and longevity to not only his ability to cut hair, but also his friendly personality. Fellow barber Jay York, who has been working with Moffitt for more than 30 years, says not only is the jovial Moffitt fun to work with, “he’s probably the best barber I’ve ever worked with.”

Many of Carmel’s movers and shakers have been in Moffitt’s chair at some point; Bob Irsay, Bill Polian and IndyCar driver Derek Daly were regular customers for years.

In all his years of cutting hair, Moffitt says he’s only had one customer he didn’t like; unfortunately, it was a regular.

“He was just a nasty person,” Moffitt said. “He’d throw magazines around, was rude to people. If you tried talking to him, he’d just tell you to shut up. I cut his hair for a few years, until he moved to Florida.”

Moffitt allowed himself a bit of a chuckle, adding, “I was glad when he left.”

Moffitt’s much more fond of his current client base, lamenting he won’t be seeing many of his customers as much anymore.

“People do you a lot of favors,” Moffitt said. “One customer gives me four Notre Dame football tickets and a parking pass every year. I’ve been given Pacers tickets, tickets to see IU and Purdue. People know I like sports, so if they have extra tickets, they call up and ask.”

Moffitt’s just as devoted to his clients. He’s ventured into nursing homes, hospitals and housebound customers’ homes throughout the years to give them a quick trim and lift their spirits.

Throughout the years, he’s seen hairstyles come and go – flattops were the rage when he started cutting hair in the 1960s, but by the 1970s, styles started getting longer – and he’s seen lots of changes in Carmel during that time as well.

“When I was growing up, I could name practically everybody in the city limits,” Moffitt said. “I think it’s great Carmel has expanded. Everything ought to grow – especially in this business. The more people there are, the more hair there is to cut.”

Moffitt cut a lot of that hair, and while his customers wish him well in his retirement, many also feel a bit sad that an era has ended.

“It was kind of a surprise,” Schneider lamented. “It’s one of those things you think will never end, then suddenly, it’s over.”

Ross Moffitt might be retiring, but the men of Carmel can still find an old-school barber experience at his shop and elsewhere in the city.