You are at:Home»Lifestyle»Blueprint For Improvement»Remodel creates interest upon approach to front door 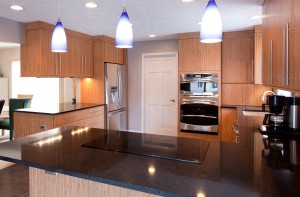 Creeping out from under the cold layer of winter into spring’s renewal is a rite of passage every year. As the warmer weather brings you outside, it may be time to take a discerning look at your home’s curb appeal. This homeowner did just that, and decided she was ready for a change.

Original Design: This west Carmel home, located in the Crooked Stick neighborhood, was built in the 1980s. The current homeowners have been in the house for 17 years. “When we originally bought the house, it had Tudor details without being a Tudor-style home,” the homeowner said. “When we removed those bits about five years ago, the house became very plain. We tried to make the look work, but we decided we needed to dress it up.” The narrow walkway and small, dark entry porch were not particularly welcoming or noticeable.

Design Process: The goal of the project was to give the house character and presence. Set far back on the lot, the homeowners wanted the home to be more impactful from the street. The design was created to have the home become more and more interesting the closer you moved toward it. Two main elements were incorporated into the final design: an expansive walkway and large yet cozy front porch.

The wide entry walkway serves as a focal point to welcome visitors as soon as they get out of their car. The lighted, stone pillars with limestone caps, which match the side block and porch base, cue visitors to the location of the new double front door. The texture of the flagstone serves as a transition from the existing asphalt driveway to the brushed concrete porch.Timber-frame architecture influenced the front porch design, but the main goal was to complement the existing look of the home. Double cedar columns and exposed beams draw the eye from the driveway. As one comes up the walkway and on to the porch, smaller details like the cedar trim on the posts and the triple brackets above the pillars, are noticeable. Partially enclosing the covered porch with newel posts and cedar rails and spindles makes the space feel like a cozy room. By adding brackets under the eaves, the design of the new porch is tied to the rest of the home.Color choice was centered on extending this cohesive look. The variegated flagstone used on the walkway and pillars compliment the home’s brick siding. The main paint color compliments the stones, while the trim color helps to pop the architectural details.

Final Result: While before the non-descript architecture was easy to ignore, the new entryway completely transformed the look of the home, making it impossible to forget. The homeowner is proud to welcome her guests. “I wanted people’s blood pressure to drop when they approached our house,” she said. “Our home is so inviting now that I think we have achieved that goal.”