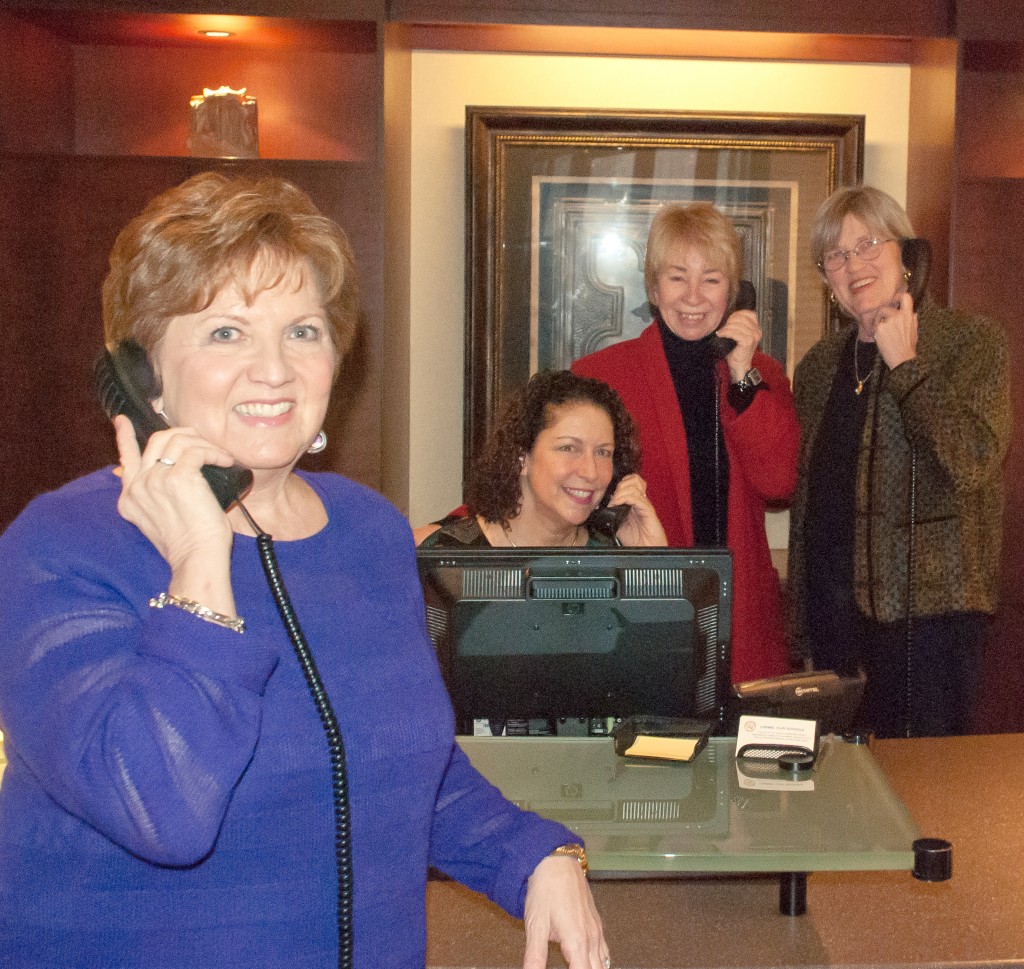 With its 27th annual fundraising telethon taking place this week, the Carmel Education Foundation is continuing its work to raise money for Carmel Clay Schools. This year though, CEF and its directors are hoping to reach beyond simply calling parents for donations and are looking to embrace the community at large and hopefully be embraced in return.

Run primarily out of a small, two-desk office in CCS’s Educational Services Center, CEF is operated on a day-to-day basis by its two co-executive directors, Stephanie McDonald and Barbara Danquist, as well as the foundation’s secretary, Janet Corbin.

As CCS’s primary not-for-profit organization for 47 years, CEF has helped hundreds of Carmel students attend college through scholarships and has worked to better the classroom environment through a teacher-grant program, a newer initiative for the foundation. 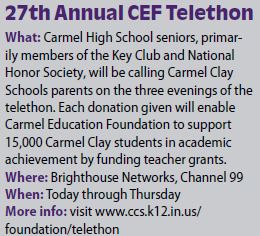 More than 45 years of service

In 1966, a company doing expansion work on Carmel Junior High, the building that is now Carmel Middle School, wanted to donate $200 to CCS for scholarships. At the time, there was no good way to donate money to the schools. Then Supt. Forrest Stoops and Jim Garretson, a teacher, worked together with a group of Carmel citizens to create the Carmel Clay Education Foundation, Inc., a tax-exempt, not-for-profit organization.

The foundation, originally operated by a board of 21 members of the Carmel community, awarded its first scholarship that year. In the years since, CEF has undergone a name change, started organizing community events and has awarded more than $1.5 million to students through its 37 endowed and 25 annual scholarships.

For the last 25 years, an educations grants program was created in recognition of the need for additional sources of funds for classroom teachers. The program has since become a central component of the foundation’s work in Carmel with CEF having cumulatively awarded more than $600,000 in education grants since the program’s inception.

Throughout the years as Carmel’s schools have grown and expanded taking on more and more students, CEF began to see the need for more funding to make its way directly to the classroom, where it can better the school lives of as many students as possible. Even with Carmel’s passing of the 2010 school referendum, Danquist, McDonald and Corbin say that there still are plenty of learning opportunities that cannot be funded with the standard district funding. That is where CEF’s education-grants program comes in.

“We don’t want to downgrade the fact that we have the opportunity in this community to do a lot of things, but there’s definitely a deficit when it comes to giving teachers funds and allowing them to enhance the teaching in their classrooms,” Danquist said. “This is one way that the community as well as parents can fill that gap, because the school system cannot. There is only so much they can do.”

“There is this opportunity for teachers to do these really great things that there wouldn’t be without the grant programs,” Corbin said.

The grants, ranging from approximately $600 to $6,000, are awarded to teachers that are looking to expand what currently is possible for their students. While two of the foundation’s grants are sponsored by Ingersoll Rand and focused exclusively on technology, the remaining grants may be awarded for nearly anything with a cost. In the past, teachers have been awarded grants allowing them to purchase more easels, integrate digital smart pens into the classroom, utilize pre-constructed project kits and even allow learning through geocaching, a growing hobby combining hidden caches with GPS technology.

According to Danquist and McDonald, the grant proposals are judged on a number of criteria including the total cost, the amount of students affected, the nature of the proposed project and even the passion of the teacher. The foundation prides itself on putting its focus on teachers and students above internal requirements and bureaucracy. Because of this, CEF has been known to embrace certain projects that may not be possible at a larger organization.

The only limit to the number of grant’s given by CEF each year is the amount of donations it has accrued during the prior year. In the future, CEF is hoping to award more, larger grants throughout the school district, embracing coordination and planning between schools, departments and teachers. 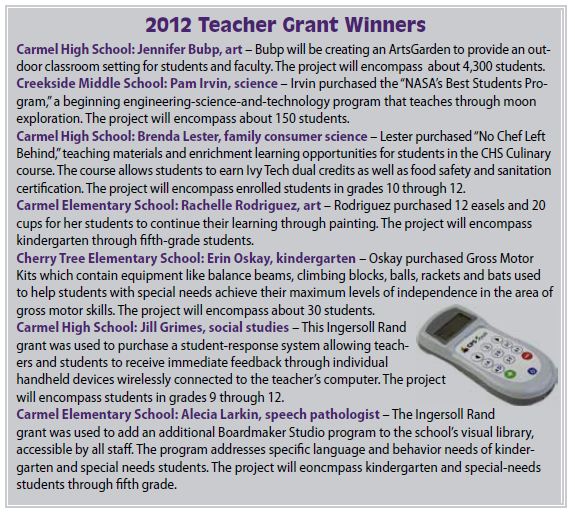 Each year with CEF’s annual telethon, Carmel High School seniors reach out to parents with children currently enrolled in Carmel schools, but now, more than ever, CEF is hoping to gain the attention of the entirety of Carmel. With the fifth annual Ghosts and Goblins 5K/2K runs scheduled in October and its Thank an Educator Honor Roll, a donation-backed honorary certificate for educators and staff, CEF is continuing to reach out and do more for all of those involved in schools.

According to Danquist and McDonald, while CEF may be primarily about making the classroom a better place, it is also about making Carmel a better place. Creating a better situation for Carmel’s children today will create a stronger Carmel tomorrow, it is hoped.