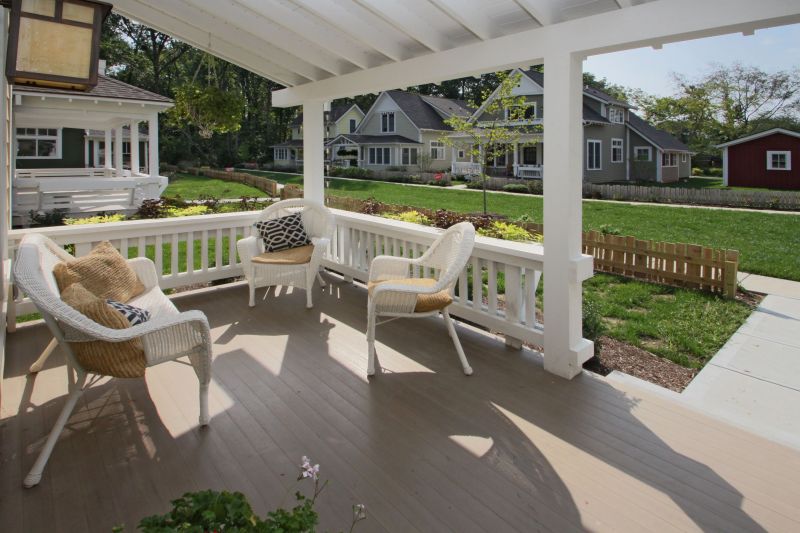 Inglenook focuses on creating an intimate setting by being designed around large front porches and a shared community green space between rows of homes. (Submitted photo)

Inglenook, a new “pocket” neighborhood, is under development on Carmel’s southside. In the past, Carmel has been a city focused on large, single family homes in standard, subdivision-style developments. Inglenook’s developer, Casey Land of LAND Development & Building, is hoping to change all of that by offering a different neighborhood experience.

Pocket neighborhoods like Inglenook are designed around an intimate, community focus. Homes face into a central green space with walkways, while streets, garages and parking are accessed behind the homes. Front porches are another key design element and are designed to face one another in small groupings of up to four homes. Visitor parking is along the neighborhood’s main central street at the base of the community lawn.

“You buy into (Inglenook) knowing that these neighborhoods are a social atmosphere. If you are shy, people will draw you out of your shell here,” Land said.

The homes in Inglenook are smaller than an average Carmel house. Often referred to as cottages, these smaller houses range from 1,100 to 2,200 square feet with an additional 1,000-square-foot basement, opposed to the 5,000-square-foot homes found in many Carmel neighborhoods. Internationally-recognized and award-winning architect Ross Chapin designed not only Inglenook’s houses but the neighborhood itself.

According to Land, efficiency is at the center of Inglenook’s architecture and design.

“We’ve really cut out the fluff. What space aren’t you using in your house (now)? You are going to use one 100 percent of the houses (in Inglenook),” Land said.

Efficiency comes into play beyond simple square footage. It is central to a green design philosophy that Land says is focused on energy efficiency and quality above pure quantity.

Admittedly though, Land refers to Inglenook as a “beta site” from a modern development standpoint. Right now, the neighborhood is an experiment in a new type of American living, something he thinks will catch on in Carmel due to the neighborhood’s proximity to the city’s various amenities and a growing desire among homeowners to create a community within the area they live.

With a single module of the development already built and many of the cottages already sold, Land is hoping to continue growing the neighborhood during the next several years.

What: Inglenook, a pocket neighborhood under development in Carmel designed by architect Ross Chapin

Where: 99th Street and Maple Drive

More info: Visit www.inglenookcarmel.com for more information. To schedule a tour of the neighborhood, call 730-3133 or e-mail inglenookcarmel@gmail.com.