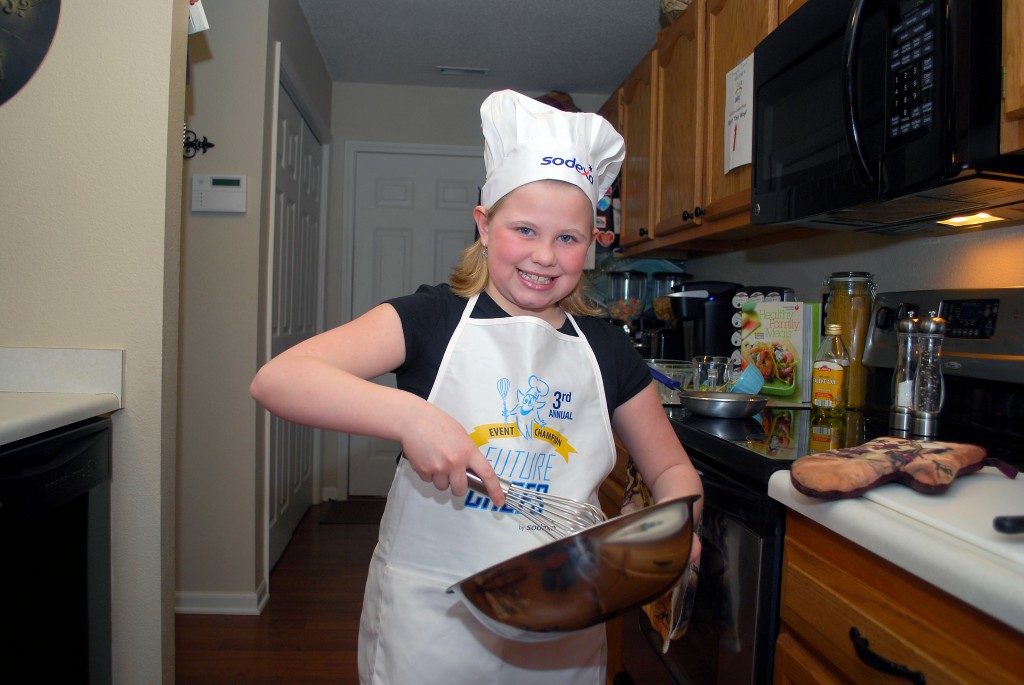 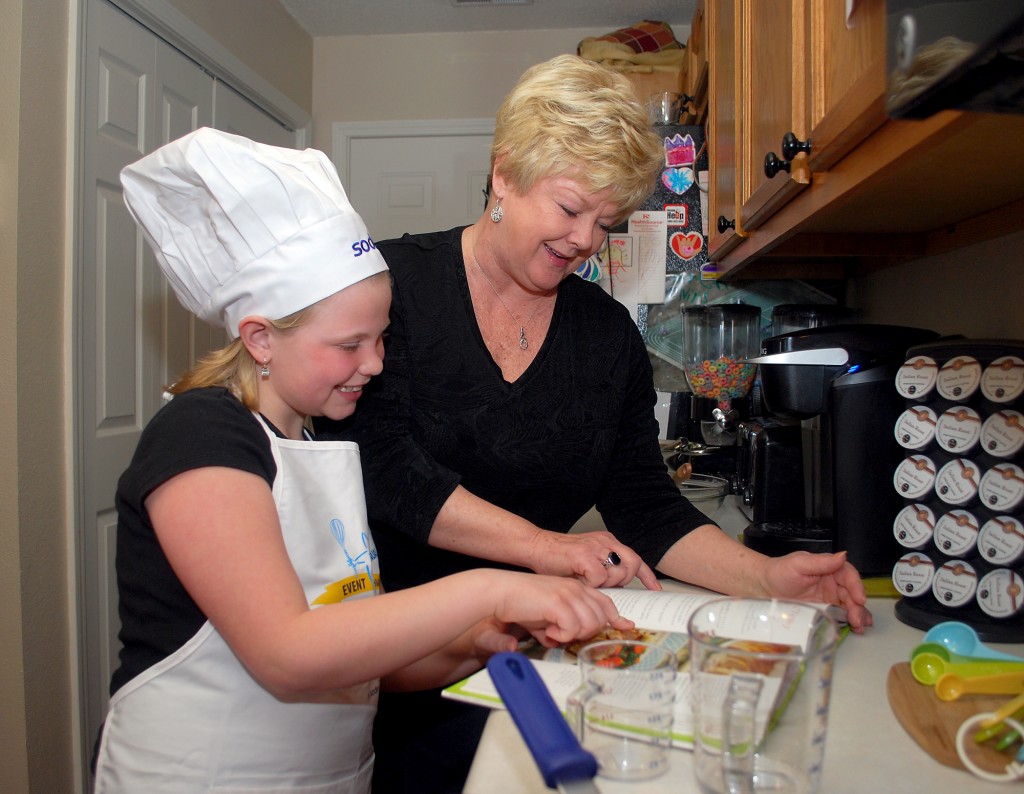 Lana Reinking and her grandmother, Sheryl Warner, look at a recipe in a cookbook she received as the Westfield Washington Schools Future Chef winner. (Photo by Robert Herrington)

Donning her white apron and chef’s hat, a giant smile crosses third-grader Lana Reinking’s face as she opens a cookbook and begins to grab ingredients and utensils.“My favorite part of cooking is tasting it at the end and what you do to cook,” she said.

Lana’s love for cooking began two years ago with her grandmother, Sheryl Warner.

The first food Lana learned to cook was pancakes.

“I started making them a couple of years ago, and that’s what I like making with my grandma,” she said.

Lana also enjoys assisting in the kitchen with homemade pizza, and any meals with mashed potatoes.

“I also like cookies and cakes and icing things,” she said with a grin, but stays away from mushrooms and onions when cooking. “I don’t like peas. I’ll eat every other vegetable but peas – and peppers.”

When she’s not enjoying a salad, Lana also likes to eat shrimp and lobster.

“I was pretty excited. When I won, I was pretty shocked,” Lana said. “I love salad. I made my salad a lot. I think it’s very good.”

Her mother thought her daughter’s victory was “pretty good” as well.

“My mom was crying, I started crying. It was pretty neat,” Jennifer Reinking, Lana’s mother, said. “It’s fun to see her come into her own and see her genuine passion for health and wellness.” 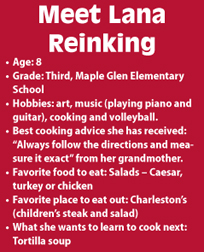 Warner taught Lana how to create her own salad after the two were grocery shopping.

“We just kind of made it up. Lana tries to make healthy choices,” she said. “Homemade is the best. I do enjoy that myself. It’s a pleasure to me to see she’s interested.”

During the weekly family dinners on Sunday, you can find Lana in the kitchen lending a hand

“It’s a good time to be close as a family,” Warner said. “It’s great to pass things down she can use. It’s evolved from that.”

And now the daughter is beginning to teach her mother.

“I’m learning with Lana,” Jennifer joked. “Some things I still have to teach her. We all have our own parts of dinner.”

When Lana is not cooking food, she enjoys drawing it – especially desserts and cake decorations. She is also learning the importance of presentation and balance of colors.

“She’s creative and that’s how she brings the art into it,” Jennifer said.

“She’s a very good learner and very serious. You can feel she definitely enjoys it,” Warner said. 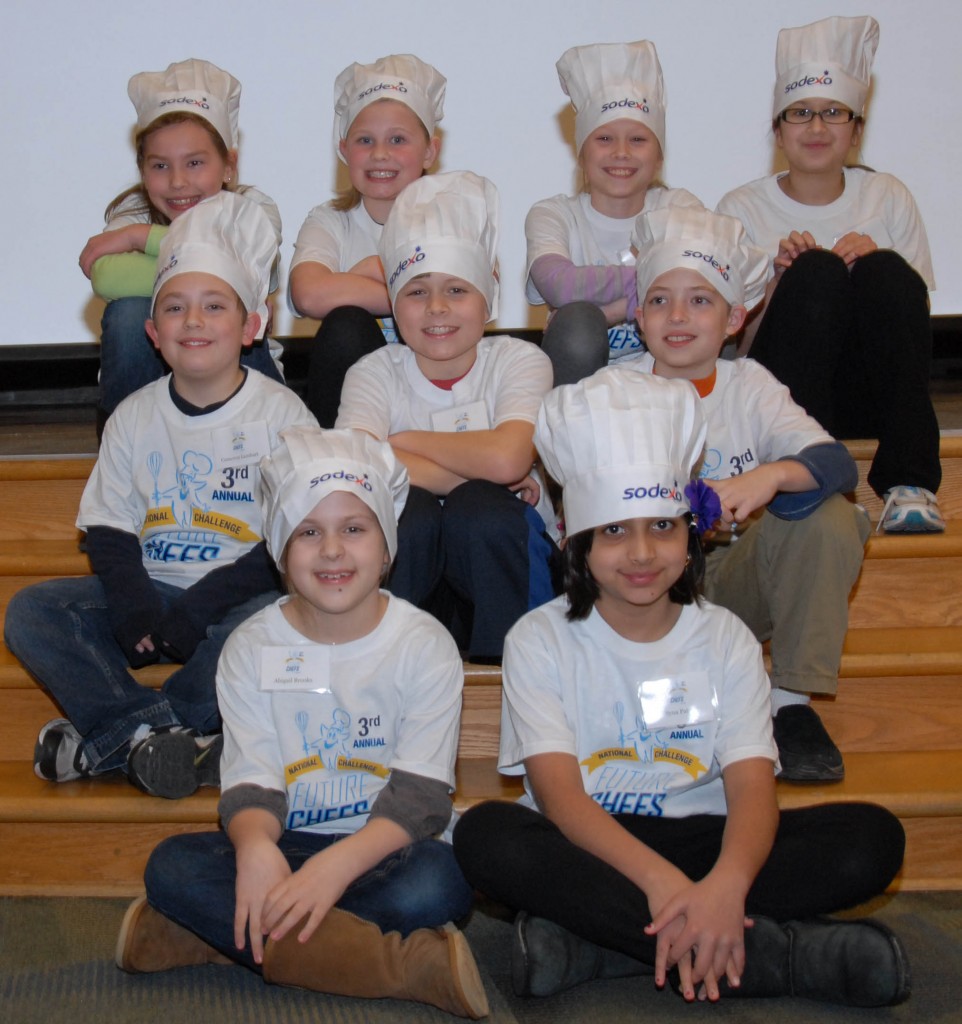 “Students learn the importance of healthy eating while honing their culinary skills,” she said. “It makes them think about healthy food choices in their life and being creative in the kitchen.”

The annual competition, which switches between elementary and middle school students yearly, had 1,700 students participate in 28 states this year.

Holmes said 29 students from WWS’s six elementary schools submitted salad recipes in hopes of being selected to compete in the district level competition. The Sodexo staff selected up to two recipes from those submitted to represent each elementary. Those students showcased their culinary talents at the competition and were judged on originality, healthy attributes, ease of preparation, kid appeal, plate presentation and use of featured ingredients.

“Lana impressed the judges by creating her own salad dressing and used her bonus ingredient,” Holmes said. “She was able to articulate what she had done which went over with our judges quite well.”

Lana’s dressing is made with vinegar, olive oil and parsley.

“I made up my own portions of it for my salad,” she said.

The perfect dressing came with trial and error though.

“One time I added way too much vinegar, and it tasted really sour,” she said.

“During the month of March, we will feature their salads at the school,” she said. 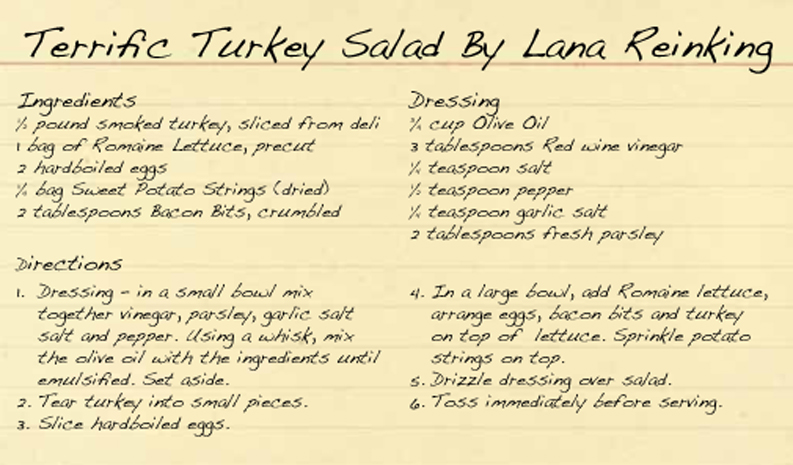