You are at:Home»Current in Zionsville»St. Maarten will actually blow you away 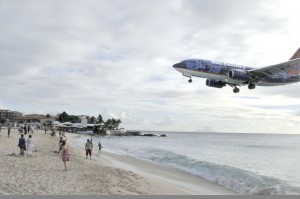 Recently, we joined some friends for a short visit to the eastern Caribbean island invisibly divided between French St. Martin and Dutch St. Maarten.  We knew that St. Martin/Maarten has beautiful beaches, magnificent homes, world-class restaurants, yachts with didn’t ask prices and places where more of the human body is exposed in public than most Americans are used to.  What we didn’t know is that one of its best-known activities on the Dutch side is so dangerous that signs warn people that they may die doing it.  We learned about this after our host invited us to join him one afternoon for a trip to a beach-side bar adjacent the international airport.

Aircraft landing on the single runway come in so low over the narrow strip of beach that people instinctively duck when the lowered wheels go over their heads.  But it is not the incoming planes that draw people to the beach. That experience is far too tame to explain the cameras people bring to record their experiences.

We should have suspected that the people standing on the beach were not just there for afternoon pina colatas when the co-pilot of an American Airlines jetliner, taxiing toward a u-turn for take-off, aimed his camera at us.  But it was not until that plane took off, engines at full throttle to clear the near-by mountains, that we realized the joke was on us.  The exhaust gases of the turbines blew us toward the water, blowing sand stinging bare legs.  Some people ran into the water to escape the hot blasts.  Others, prepared for what was coming, clutched the fence separating the beach from the airport.

When the plane had lifted off and we had figured out why we had been brought by our now smiling host to the beach just in time for afternoon departures, we finally read the large sign near the airport road – “Jet blast of departing and arriving aircraft can cause severe physical harm resulting in extreme bodily harm and/or death.”  In the United States, fear of lawsuits would surely have led to closing the beach or at least building a barrier between the planes and the people.  But in the laid back environs of the Caribbean, the warning sign serves as a badge of honor, introducing the many popular YouTube videos we learned about when we returned, showing people from all over the world braving the jet blasts.   We seem to have been among the few people who haven’t previously heard about what it means to be “blown away” on St. Maarten.  Future visitors are now warned.