You are at:Home»Current in Fishers»‘We’re just getting started’ 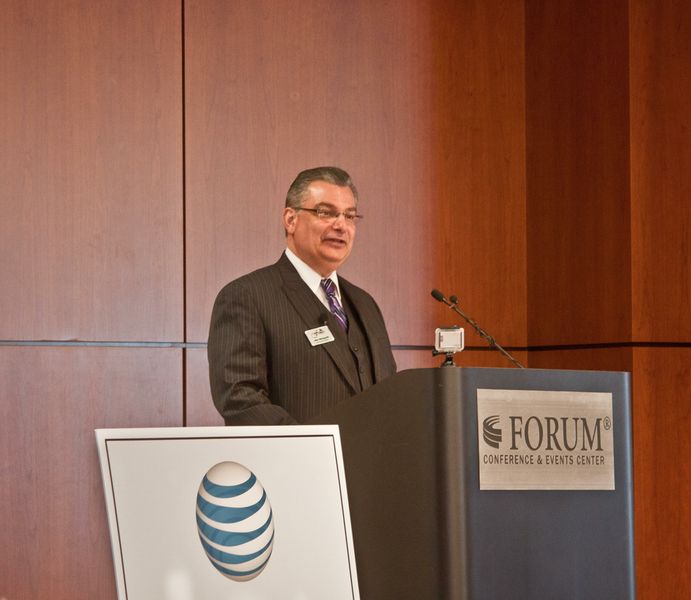 A crowd of more than 200 business people and community members packed the FORUM Conference and Events Center last Wednesday, making it one of the busiest Fishers Chamber of Commerce luncheons in the past few months.

The scratching of knives and forks faded when the attraction – John Weingardt, Fishers Town Council president – took the podium to present his thoughts on the state of the Town of Fishers.

“They came to hear the new kid,” he opened.

Weingardt, with only a year under his belt as a Fishers Town Council member, took up the mantle of council president at the council’s first meeting this year. He took the reigns over from Scott Faultless, who was president of the council for 12 years.

“This is a historical event to see new leadership in town,” Brian Baehl, a member of the town’s Advisory Plan Commission and past member of CityYes, the political action committee that sought city status for Fishers, said.

Weingardt jumped into his speech, outlining some of the accomplishments the town garnered in its recent history, as well as framing its outlook.

“We’ve (he and his family) watched with pride how Fishers has flourished,” he said.

Business as a building block

But sitting back and watching isn’t enough, according to the new leader.

“Fishers cannot afford to become complacent in a world that is constantly changing,” Weingardt said.

He recognized that it’s likely that many people in town have different ideas on the direction the town should go, but common elements bind them together.

“Fishers should be a community that attracts the best and brightest to live, work and play,” he said.

He went on to detail the business side of town workings, specifically economic development boons that came to fruition leading up to the address – including a deal with First Internet Bank that went before the council last Monday.

The company will take up residence at 11201 USA Pkwy., a large space that was previously occupied by the St.Vincent Medical Center and has long been vacant, according to Tim Gropp, assistant director of economic development.

First Internet Bank sought a two-year vacant building property tax abatement, and the company is bringing 48 new jobs to the area and investing $4.3 million in the property. The council is still required to pass a confirmatory resolution declaring the property an economic revitalization area, as well as have a vote on the abatement itself, which is 100 percent the first year and 50 percent the second, according to Gropp at the Feb. 18 Fishers Town Council meeting.

It was just one of the businesses touted in the speech, which Weingardt said resulted in a total investment of approximately $16 million last year.

Accomplishments in the realm of economic development were credited to Fishers Advantage, one of the town’s initiatives.

A multimedia approach was taken to detail one of the projects the town took on and saw come to fruition recently – business incubator Launch Fishers. Weingardt also spoke about other projects, such as the 106th Street interchange, the Flaherty & Collins Properties mixed-use development in front of town hall and a real-time traffic signal system.

“We’re on our way to building our sense of place,” he said.

Looking outside of business

Early on, Weingardt said that while being part of other organizations, teachers, firefighters and police officers were the folks that impressed him the most, as well as new business owners.

While addressing other community members in the audience, he described the Hamilton Southeastern School District as an “economic development weapon.”

“A physical space alone will not create the sense of community we’re looking for,” Weingardt said. “We need an engaged and active citizenry.”

He said the town’s staff met with more than 65 community groups last year to better understand what they added to the community and to bolster the events they already hold.

“These community groups are the reason why we have the festivals, do sport tournaments, 5K runs and charity events that we all have grown to associate with our community,” he said.

Weingardt covered government services and infrastructure as well, with videos on the new ambulance bay and quarters for Fishers fire and emergency services personnel and the FPD impact car program included as part of his closing comments.

“We’ve come a long way,” he said. “And we’re just getting started.”