You are at:Home»Current in Westfield»From bungy jumping to bird watching 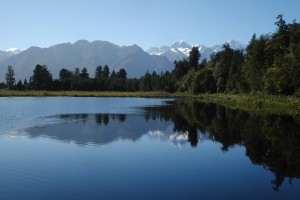 By Lana BandyNew Zealand is a nature lover’s paradise that also appeals to adventure-seeking Hoosiers.

About the size of Colorado, but only as populous as Kentucky, New Zealand has two main landmasses – the North and the South Islands. The North claims two of the country’s largest cities: Auckland, with its beautiful harbor, and Wellington, the capital city. But, it’s the South Island’s beauty that draws tourists.

Travelers to New Zealand find amazing scenery (for proof, see The Lord of the Rings films, in which the country starred as Middle Earth). New Zealand has diverse terrain, from mountains, fjords and glaciers to oceans, rain forests and farms. Much of the land is untouched by man, explaining the country’s slogan, “100% Pure.” One popular South Island destination is Milford Sound, a stunning fjord Rudyard Kipling called, “The Eighth Wonder of the World.” Also on the South Island are the Southern Alps and the highest mountain, Mt. Cook.

Queenstown is a destination adrenaline junkies particularly enjoy. Bungy jumping was invented here in the 1980s and is still going strong. The original bungy site is outside Queenstown, but the business also includes numerous bungy varieties, from tandems to canyon “swings” to the 440-foot Nevis jump. You can jump or run, dive, flip or spin, day or night.

For the less adventurous, bird watching is a popular activity. New Zealand is home to many species that can be found nowhere else. The kiwi (the bird, not the fruit) lends its name to the people of New Zealand. This cute, long-billed, flightless ball of a bird is a national symbol. With so many predators, your best chance of spotting this nocturnal bird is in a wildlife sanctuary.

Despite its distance from the U.S., New Zealand is an affordable destination for most people. Getting around can be tricky if you don’t want to drive on the left side of the road. A good option is a “hop-on, hop-off” bus, such as Stray (www.straytravel.com). In planning your adventure, remember that Indiana’s winter is New Zealand’s summer.

Lana Bandy is co-editor of The Current’s puzzle page and a columnist for Carmel Business Leader. She may be reached at lcbandym@yahoo.com.