You are at:Home»Current in Westfield»Concert will celebrate the turbulent 60s 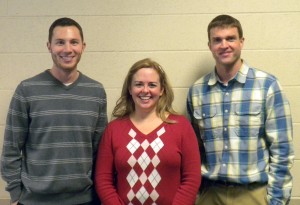 By Anna Skinner“The times they are a-changin’,” Bob Dylan once famously sang, and change they did. The 1960s are considered to be one of the biggest cultural changes in music history with the transformation of The Beatles, a “new and improved” Elvis, and the first real appearance of electric music when Bob Dylan plugged in for “Maggie’s Farm.”

Alongside the revolution of rock were the space race, President John F. Kennedy’s assassination and equal/women’s rights. It was a busy decade.

Westfield High School plans to reenact the 60s in a rock concert in the high school auditorium on May 9. The idea was inspired by the annual American Pie blowout concert put on by Columbus North’s history teacher Ed Niespodziani. WHS teachers Mark Ewing, Jennifer Hasler-Troutman and Kurt Frederick worked with Niespodziani to create Westfield’s own American Pie and mesh education and the history of rock and roll together. This year’s theme is “The Times They Are a-Changin’” and is focused on none other than the 1960s.

“We truly are providing a living history lesson for the community,” Ewing said. “Those who lived it get to reminisce about the past, and for our students, it is an opportunity to learn and discover through music one of the most important and turbulent time periods in our country’s history. American Pie provides the ultimate link between history and rock and roll.”

At this distinctive rock concert, students will perform songs by famous rock stars of the time like Bob Dylan, The Who, The Beatles, Aretha Franklin and more.

“American Pie gives people the opportunity to take notice of those songs and in some cases re-live the gripping nature and power of music on our minds, bodies and souls,” Frederick said.

Not only will there be music, but there will also be newscasts from the 60s performed by narrators and personal stories shared from Westfield’s own citizens who grew up in the 60s and experienced the wild decade first hand.

Hasler-Troutman, who actually student taught at Columbus North in the 90s, has seen the sell-out concert and cannot wait for Westfield to have the same experience.

“American Pie is a new tradition in Westfield for all ages to come together and rock!” she said.

Anyone from the Westfield community who has any comments on the fads, politics, movies, etc., of the 60s or wants to share their own personal story of where they were in the decade are asked to send them to whsamericanpie@gmail.com. For more information regarding the rock concert, follow @WHSAmericanPie on Twitter or join the WHS AmericanPie Facebook page.