You are at:Home»Current in Westfield»What’s in a name? Dollar signs, school officials hope 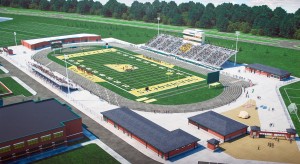 Westfield Washington Schools has procured three donors for its “Build the Rock” campaign to construct a new football stadium behind Westfield High School.

One of them is St. Vincent Health. Supt. Mark Keen announced that the hospital will have a major sponsorship role in the new Westfield Washington Community Fields.

St. Vincent provides sports medicine care at Westfield Washington Schools and currently has two athletic trainers at the high school and one at the middle school. 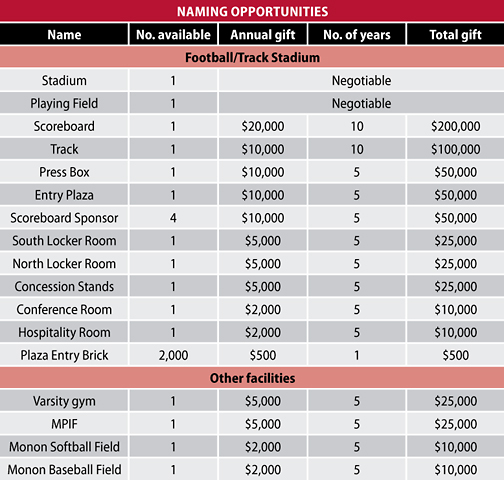 Keen said the district was still working on procuring another major donor so the exact naming rights have not been announced. Keen said St. Vincent’s sponsorship could be either the playing field or stadium naming rights.

“It’s seven figures,” he said of St. Vincent’s commitment. “More than any other Central Indiana has received for naming rights.”

In comparison, Noblesville received $125,000 from Hare Chevrolet for its football field naming rights.

Naming rights for school facilities has become a more common practice in the wake of funding cuts to help offset the costs of athletic programs. Hare Chevrolet became the first Central Indiana corporate sponsor to secure naming rights for a high school field. The car dealership made a deal with Noblesville Schools for the stadium naming rights (10 years for $125,000) in 2006. The deal allowed Noblesville to join a select group of Indiana high schools with the next-generation artificial turf fields, which cost $575,000.

WHS Athletic Director Bill Davis said the “Build the Rock” campaign was looking to raise $7.5 million with a goal of $9 million.

“We’re going to do even better things,” he said. “We’re not jumping by hundreds, we’re jumping by millions.”

The campaign is offering naming rights in five- and 10-year increments, Davis said.

“We’re trying to create a situation where a lot of people can get involved,” he said.

Keen said Sodexho had committed to being a major sponsor, and Paul Estridge of the Estridge Co. has committed $350,000 to become the scoreboard title sponsor.

The campaign began with $1.3 million. Keen said this came from the refinancing of bonds. He added that the stadium will be built with no taxpayer dollars.

“We want to drive our tax rate down. It’s all driven by donations,” he said.

Once the stadium is built, WWS will sell the current stadium. Keen said money raised from that sale will go to pay off bonds, which will lower tax rates for Westfield citizens.

The new stadium may be built in installments as money allows, Keen said. The three-part process includes the plaza entrance and visitor’s locker room; artificial field and track, underground electrical wiring, concession stand and possible bleachers; and the home bleachers, press box and home locker room. Keen expects the field to be used for more than 100 events in the fall and 60 events in the spring.

“It’s not just a football field; it’s to be owned by the community for a variety of events,” he said. “We want the community to use what we build because we are part of the community.”