You are at:Home»Current in Zionsville»Passion for the Priesthood

Four ZCHS graduates are on a life-changing journey 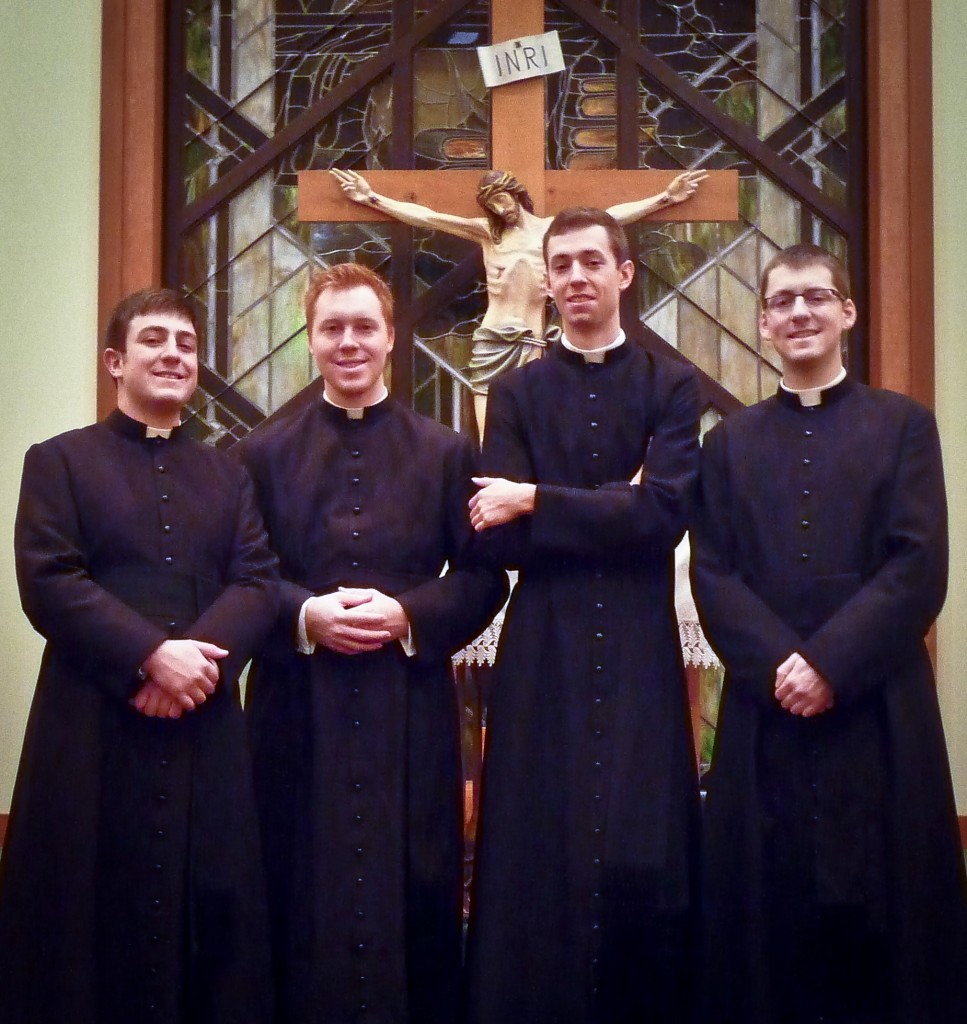 Their stories are unique, but their paths are similar. Four young men from Zionsville, Michael Bower, Christian DeCarlo, James Baxter, and Jonathan Matthes are on a journey to the priesthood.

Becoming a Knight and future priest

“There was nothing I would rather NOT do than become a priest,” Bower confessed. “But, it became apparent to me over time that this is what I was meant to do.”

Bower’s turning point began his junior year at a retreat after two “young and relevant” new priests arrived at his parish, St. Alphonsus Liguori Catholic Church in Zionsville, and started a group called the Knights of the Holy Temple.

According to Father Brian Doerr, Knights founder and former priest at St. Al’s who is now serving as the Vice Rector of Mount St. Mary’s Seminary in Maryland, “The Knights were ‘different’ in that it provided what young men need – a ‘pack’ or ‘tribe’ in which to belong. The idea is as simple as it is ancient: no boy becomes a man without a male mentor and a cadre of other boys with which to test themselves and to grow and to develop.”

“I had never thought of the priesthood before, but people told me I would be a good one,” he said. “I was on the edge, and (Bower) encouraged and invited me to the group.”

It was there that DeCarlo’s faith deepened, and he moved from sitting in the pew to becoming a participant.

Upon graduation, DeCarlo attended Purdue University as a management major where he started a Catholic men’s group, but the priesthood still simmered. By March, Father Brian suggested attending seminary, and the idea was confirmed through an eight-week mission experience living with homeless men through the Missionaries of Charity in New York.

Baxter was also impacted by the new priests, the Knights and also his parents.

“It didn’t cross my mind to become a priest. But I had the witness of my parents with my dad praying and my mom doing Bible study,” Baxter said. “When the new priests arrived, it took my stereotypes of priests as old and crusty and threw them up in the air.”

He also joined the Knights through an invitation from Bower but admits his faith ebbed and flowed as “the spirit of the age of relativism and materialism became my creed.”

It also led to his misery and unfulfillment. A turning point came last July just before he was leaving for Indiana University to study business to become a stock broker.

“God acted quickly, within 24 hours,” and he was guided on a new path to a silent retreat where he reflected on the question, “What is my sacrifice?” The answer changed his future course forever.

Matthes’ journey to priesthood began much earlier, back in first grade.

“I heard a voice in math class say, ‘I want you to be a priest.’ It was ironic since I hate math, but I remember it.” Matthes said.

From that point on, the idea remained, but he remembered thinking, “I have to roll with life for a while. Now is not the time to decide.”

He did roll with life for a while, participating in an internship at Fox Networks while heading down a broadcasting path until his first-grade epiphany reemerged while studying abroad in Austria.

“I felt like the time to decide was approaching, and I evaluated my strengths and weaknesses and realized that the skills that would help me in broadcasting would also help me in the priesthood,” Matthes said.

The call to the priesthood for each of these young men keeps getting stronger as they continue their studies but it is not without obstacles along the way.

“It’s not easy to think about waking up alone the rest of my life, but when I would pray, there would be an ability to accept it,” Baxter said. “I come from a loving, supportive family so I know what I’m giving up – a great family.”

Perceptions of the church and priests are another hurdle.

“We need to show people that we are normal. We didn’t grow up in our own celibate box,” Bower said. “We need to reach people where they are, but Christ has to be at the center.”

“We need to be ourselves, be genuine,” DeCarlo added. “That’s what living out the Catholic faith should be. But, we should not be afraid to stand up for the truth.”

The sexual abuse scandals in the priesthood also are on their minds.

“It was terrible that people had to suffer in the hands of men. But, we forget that it is a problem beyond the church – coaches, family members, babysitters are all abusers,” Matthes said. “Terrible choices by some does not have to define the priesthood. I want to be part of the change.”

One common theme among the four is that they would not be where they are without peer mentoring and the guidance of Fathers Richard and Brian, who happen to be brothers.

“These young men, in particular, have chosen to live, as we often say, ‘intentionally,’” Father Brian said. “This means sacrifice, hard work, resisting temptations common to young men, believing there is some important task to accomplish and, above all, to immerse themselves in prayer to discover God’s will in their lives.”

“There is a lot of darkness in the world today,” his brother said. “If young people want a life that brings order into the chaos and hope to the lost, the world needs them – be it as priests, sisters or principled people who live and work in the world as lay people.” 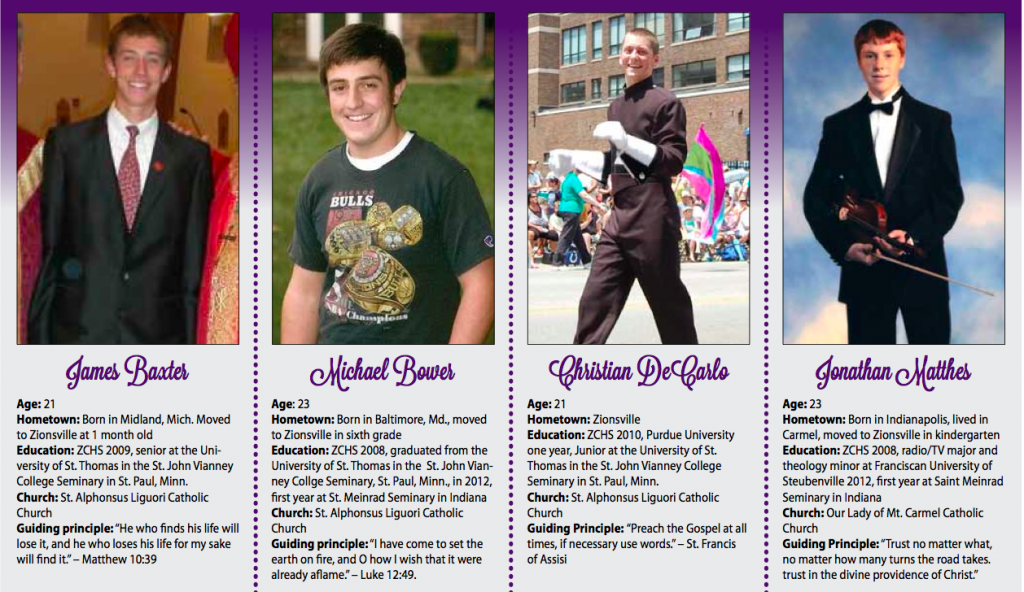