You are at:Home»Current in Westfield»Washington Township expands MacGregor Park 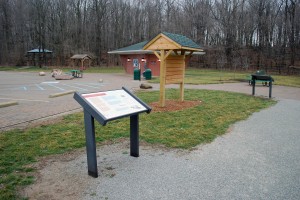 MacGregor Park is now complete thanks to the purchase of the remaining 40 acres of land from the Shelia Beals Limited Partnership, Washington Township Trustee David D. Gill announced recently. The park began in 2001 with a gift of 41 acres from Shelia Beals MacGregor, who intended it to be a nature park much as it was when the first settlers arrived.

“The new land will fit seamlessly in the existing park and carry the same conservation easement agreement between the Washington Township Parks and Recreation and the State Dept. of Natural Resources,” Gill said. “This will enable WTPR to protect and preserve almost 100 acres of natural forest in its original state forever.”

The purchase was greatly aided by an award from the State’s Bicentennial Nature Trust Fund specifically designed to acquire park land throughout the state. Gill praised the cooperation between his staff and the DNR.

“With the growth in Westfield along the U.S. 31 corridor and the Grand Park Project, a significant plot of natural land in its midst has been protected for the county for generations to come,” Gill said.