You are at:Home»Current in Fishers»Hundred-year hunger

It’s an all-out attack on the senses.

Open the door to Taylor’s Bakery, and the sweetness of glazed donuts and baking cake hits the nose and row after row after row of pastries snare the eyes.

Drew and Matt Allen, the current owners and operators of the business, are the fourth generation to take over the grocery-turned-bakery that makes it home in Indianapolis with its second location on 116th Street.

Long before the family moved and brought sugary confections to downtown Fishers, D.O. (Dennis Orville) Taylor founded the original Taylor’s Grocery and Bakery at 38th and Illinois streets 100 years ago next Wednesday.

He passed the business down to his daughter, Virginia, who married James Allen, a Butler University track star.

A now yellowed piece of paperwork notes that in 1945, it cost a shopper at the store 58 cents to pick up six pork chops. The times continued to change.

The 1950s and 1960s also marked the transition from a grocery to just a bakery.

Drew said the family moved north as their business grew, and now he recognizes the growth happening in the town itself.

“We moved out to Fishers in ’82 when it was five or six thousand people, so we’ve seen the growth firsthand,” he said.

“Picking Fishers, the answer was obvious to us,” Matt said. 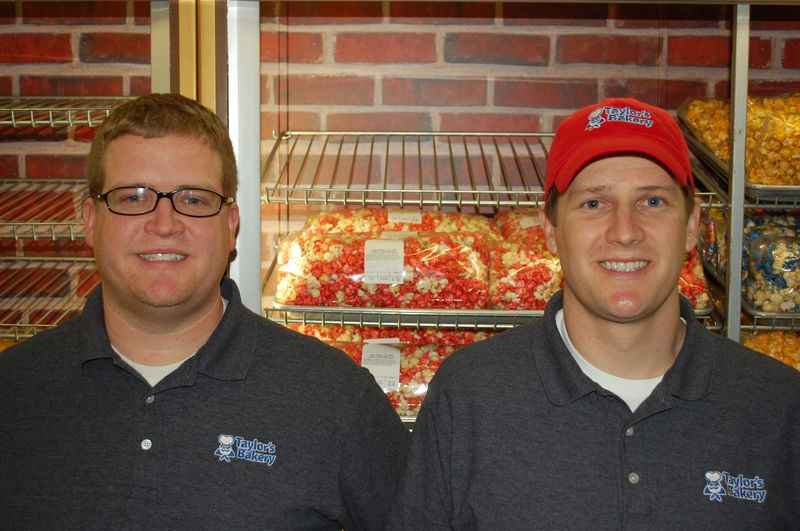 Both Drew and Matt studied business at Indiana University and then took the helm.

Drew said the brothers had always been attached to the business, which served as a “catalyst” for their own growth.

Matt said he spent holidays and summers learning the ins and the outs of the business, including the recipes.

Today, they pride themselves on the consistency they offer customers.

A Taylor’s angel food cake made this year should be identical to one served in 1963.

“Same pans, you know,” Matt said. “It goes in the same box. It’s tied the same way. Everything is identical about it.”

However, new products do indeed line the walls, standing alongside the tried-and-true glazed yeast donuts, tiered cakes and other treats that have been getting the Taylor’s treatment for the past century.

Bags of popcorn are stacked on shelves. Some are the Chicago blend of caramel and cheese corn, while others appear to be colored with the rainbow and taste like Fruity Pebbles cereal.

The second recently added product, in terms of the business’s overall history, is a variety of chocolates.

As people continue to order cakes for birthdays and weddings, the duo has their eyes on maintaining the business, or in Matt’s words, “keep on keeping on,” but more growth may be in store.

Further expansion of the century-old business could come in three to five years, according to Drew.

“With two stores already, to remain consistent, to put a really quality product (out), we’re afraid if we expand too fast we’ll lose that,” he said. “We don’t really go chasing the quick dollar. We’re more about long-term (gains).”

As part of a business intertwined with people’s happy moments – birthdays, weddings and more – one of Matt’s favorite parts of running the bakeries is being part of the fun.

But a legacy is to be maintained. They’re not just continuing an angel food cake recipe passed down throughout the year’s – the brothers are holding onto a family-run institution.

Drew said he sensed a feeling of gratitude from what he did: working to provide for future generations.

“Every day you go to work, you’re literally fighting for your entire family,” he said.