You are at:Home»Current in Westfield»Ameriana Bank thanked for honoring city employees 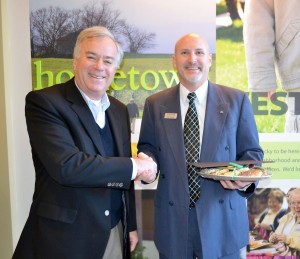 The city began the program as a way of recognizing employees for going above and beyond in helping within the community or within their departments or fellow employees. All city employees are eligible and nominated for this award by their peers. The GEM committee then selects who they feel best deserves the award each month.

“I was approached in late 2010 by a former city employee, Eric Becker, who has since passed away. He approached Ameriana because of our continued involvement around the city and told me about this award and asked if we would consider being the sponsor,” Garrett said. “I believe we began the sponsorship in January 2011 and have continued ever since.”

Each month, Stephanie Baumann sends Garrett the name of the winner and Ameriana Bank has a certificate printed and presents it to the recipient along with a $25 Visa gift card at monthly meetings attended by many city employees.

“There is also a plaque that hangs in the Westfield Public Works Dept., and each winner gets their name added to this plaque,” Garrett said.