You are at:Home»Lifestyle»Blueprint For Improvement»Bath remodel considers owners’ long-term plans 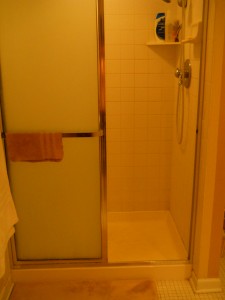 ORIGINAL BATHROOM: This home, located in the North Willow Farms subdivision on the north side of Indianapolis, was built in 1967. The current owners have lived there since 1972 and their reasons for updating their home were similar to many others:   “There was nothing structurally wrong with the bathroom, but it was very dated. A few years ago, we decided we were going to stay in the house, so we began remodeling it. We started with the kitchen and then moved to the master bath.”

DESIGN PHASE: The overall footprint of the space worked well already, therefore, the main goal of the remodel was to update. “The shower door was hazed over, the shower did not work well, and the grout was bad.” The designer was able to gain space from the toilet compartment to increase the size of the shower.

SHOWER DETAILS: The new walk-in shower was tiled with a 12-inch by 18-inch stone tile in Grecia beige in a horizontal pattern. A storage wall niche was installed with a multicolored tile that matched the shower floor. The shower design included an arched doorway into the shower, which was tiled in 4-inch by 4-inch tumbled stone in a Sandlewood color. A frameless glass shower door also was installed. The new maple cabinetry in a cashmere finish with an auburn glaze was complimented with brushed bronze hardware. Venetian gold granite countertops were added, with rubbed bronze faucets. 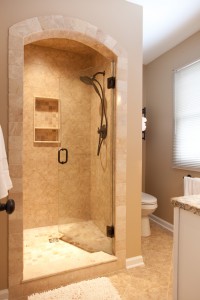 AGING-IN-PLACE: The owners plan to stay in their home for a long time and mobility and ease-of-use were a consideration in the design. A lower door threshold into the shower and a decorative yet functional grab bar were added to increase the usability of the space.

FINAL RESULT: “Our favorite part of the new bathroom is the shower. Our designer knew our budget and helped us balance the materials and design costs so we could get the results we wanted.”