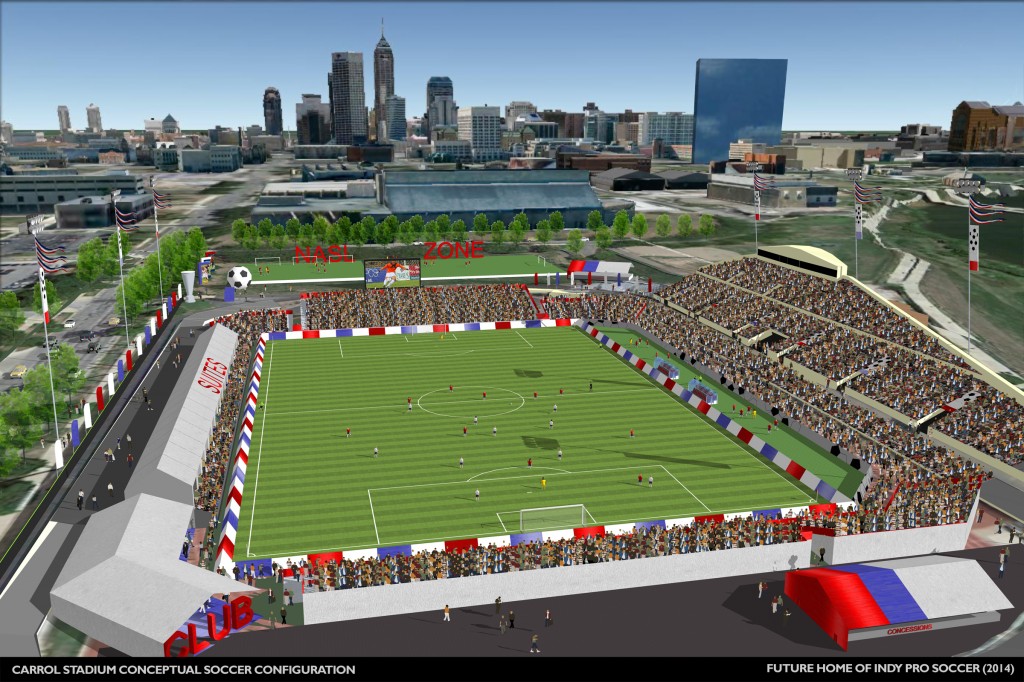 The above rendering shows a number of changes and additions that will be made to Carroll Stadium over the next two years.

Ersal Ozdemir, president and CEO of Keystone Construction Corp., a member of Current Publishing’s board of directors and a Carmel resident, announced at a press conference earlier this week that he planned to bring a professional soccer team to Indianapolis in 2014.

“I believe the world is getting global. In the United States, soccer has evolved significantly during the last 15 years. I have seen the improvements in my short lifetime, and at some point as it continues to grow, we feel that the sport is going to even catch on in a bigger way at both a spectator and a professional level,” Ozdemir said. “We are trying to be a part of that growth.”

The currently unnamed team will be formed as a member of the North American Soccer League, a Division II Professional League including 12 teams across the United States, Canada and Puerto Rico. The team is slated to play its first season in 2014. While a franchise fee is commonplace for these types of expansions, Ozdemir declined to comment regarding the specific amount.

“In the rest of the world, soccer is extremely popular, almost to the point of being a fanatic passion. Everybody plays soccer. It doesn’t matter how good you are,” Ozdemir said. “I played through middle school, high school and played in College (at Purdue University) at the club level. I still play occasionally.”

Ozdemir, a native of Turkey and lifelong soccer fan, has been looking to invest in a professional soccer team during the last ten years.

“Soccer is not an elite sport. You see people in parts of Africa making balls out of nothing. Many people do not have balls or jerseys or cleats. In South America, people take rubber tree leaves and make balls. It is a very accessible sport. It doesn’t require anything besides something that looks like a ball,” Ozdemir said. “(When I was young,) we played a lot, and we would put two shoes down as the goal or some players would lay down their shirts as the goal, and we played. Obviously, you would argue about whether a shot was too high or too low when you scored because you didn’t have a post!”

Indiana Twisters: Announced as a Continental Indoor Soccer League team in 1996, the Indianapolis Twisters received their name after holding a contest in which fans were able to submit their ideas, similar to what ownership is planning for the newly announced NASL team. Despite having more than 5,100 fans at the team’s opening game, attendance dwindled to roughly 2,500 a month later. Soon thereafter, the league took control of the failing team for its final six games. Reincarnated as the Indiana Twisters under new ownership the next season, the team did well throughout 1997 until the league itself collapsed at the end of the year. The team’s remaining assets were purchased by the owners of the Indiana Blast in 1998.

Indiana Blast: Founded in 1997, the Indiana Blast was a member of the United Soccer Leagues, playing in the D-3 Pro League, the A-League and the USL Premier Development League. The team played at Kuntz Memorial Stadium in Indianapolis, the venue known for hosting the IHSAA State Soccer finals. In 2000, the team averaged an attendance of 1,762, filling barely a third of the stadium’s total seating. The team folded at the end of the 2004 season due to a number of coaching changes, poor winning records and low attendance.

Over the last year, Ozdemir hired Peter Wilt, former president and general manager of the Chicago Fire, to lead the team’s initiative. According to the team’s newly launched website, Wilt has been formally brought on as team president, a popular move amongst many area soccer fans.

The team is slated to play its first two seasons at IUPUI’s Carroll Track and Soccer Stadium in downtown Indianapolis with plans for a standalone, permanent stadium coming sometime in the future. The downtown venue was consistently voted as the best location for the team by local fans of the professional soccer initiative. A number of renovations are planned for the stadium in hopes of creating a more intimate and soccer-specific atmosphere.

Professional soccer team organizers Ersal Ozdemir and Peter Wilt have planned a number of changes to be made between now and the beginning of the 2014 season. Changes include the removal of roughly 5,000 seats, moving seating behind the goals and adding wind screens, tents and other amenities in certain areas of the facility. According to Wilt, these changes are aimed at creating a more intimate and soccer-specific atmosphere with roughly 7,000 seats remaining. Funding for the retrofit has yet to be determined.

Ozdemir emphasized the importance of Hamilton County facilities and residents as part of the team’s success during the next several years. Wilt said the team was brainstorming ideas to make use of Westfield’s Grand Park sports campus as well as ways to embrace youth soccer teams and families throughout all of Central Indiana. Grand Park, which Ozdemir referred to as “a Mecca,” could play host to several of the team’s exhibition games and training sessions after its completion in 2014.

According to Wilt, the team will be looking to create as many connections as possible with local youth soccer teams. While specific programs are still being discussed, Wilt gave theoretical examples including an adopt-a-player program and soccer camps coached by the team’s players.

Youth soccer families are one of three major demographics the team is hoping to embrace. The other two are Indiana’s ethnic population and Millennials (people born between 1983 and 2000). Soccer fandom has been found to be much higher amongst Millennials and those with cultural backgrounds in countries outside of the United States, where soccer is already well established.

Both Ozdemir and Wilt expressed an interest in creating a grassroots campaign around the team. Part of this campaign will be allowing fans to vote on a team name, team logo and team colors starting today. For more information regarding the plan and the team, visit www.indyprosoccer.com. 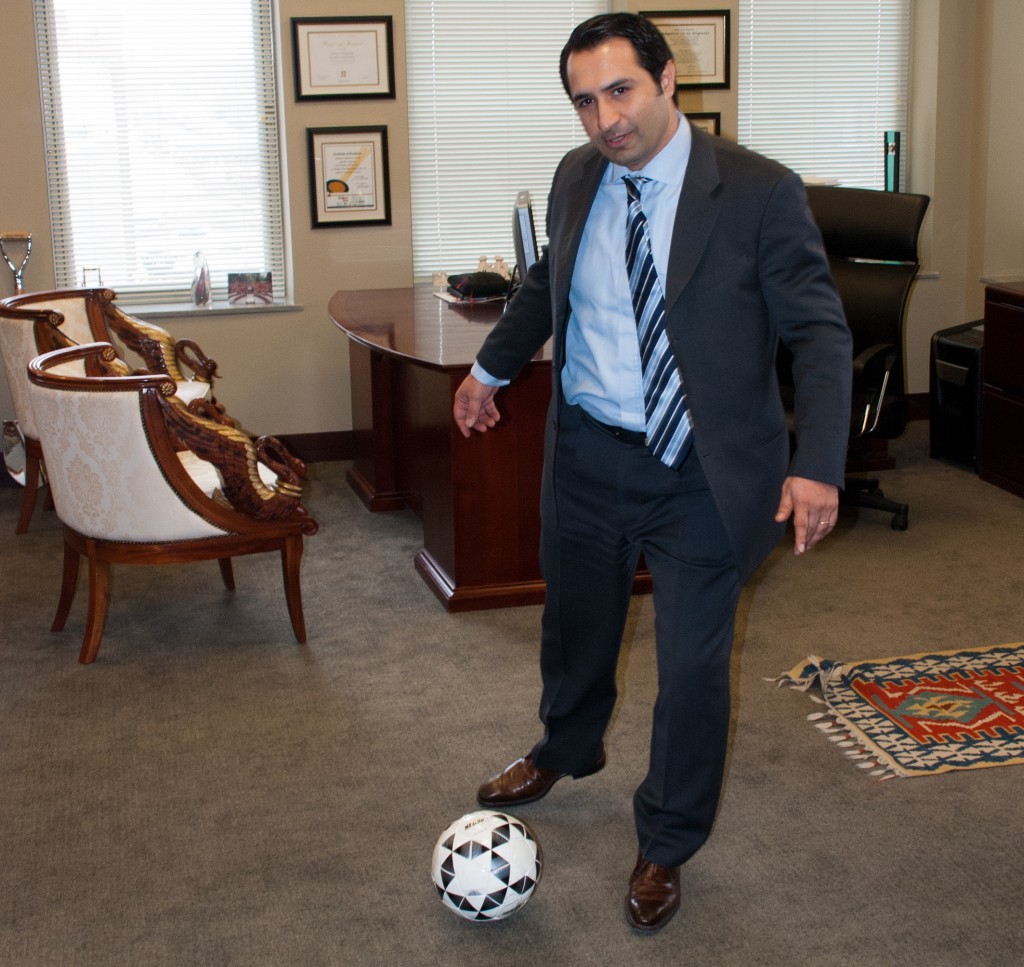 Let us know your thoughts

Are you excited about or skeptical of a professional soccer team coming to Indianapolis? Are you looking forward to attending games in the future? Let us know! Leave a comment below or e-mail your thoughts to christian@youarecurrent.com.