You are at:Home»Current in Westfield»Contract awarded for next phase of U.S. 31 construction 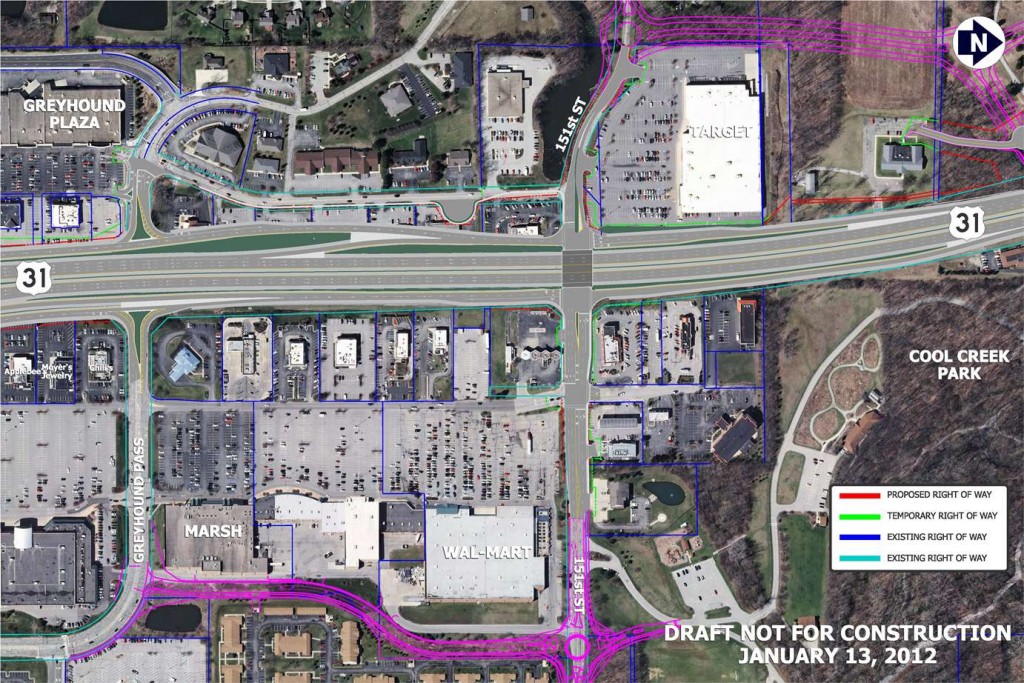 INDOT has awarded a $58.4 million contract for the new U.S. 31 Hamilton County between 146th and 169th streets, including new freeway exits at 146th, 151st and 161st streets. The bid, submitted by Rieth-Riley Construction of Goshen, was the lowest among five contractors and nearly $5 million below engineers’ cost estimates.

In March 2012, Gov. Mitch Daniels announced plans to open the new U.S. 31 Hamilton County project to traffic by the end of 2015, which was three years earlier than previously anticipated. INDOT plans to accept bids for three remaining construction phases before the end of this year to meet the 2015 deadline.

As soon as weather permits, Rieth-Riley is expected to begin work rebuilding U.S. 31 from 146th Street to just south of 169th Street. New ramps will connect 146th Street to the north with Greyhound Pass and 151st Street with a “split-diamond” interchange. A new freeway exit at 161st Street will have roundabouts controlling ramp and cross traffic. Local traffic on Union Street and 156th Street will pass under U.S. 31 with no on or off ramps.

U.S. 31 will remain two lanes in each direction during peak times with traffic shifts and temporary intersection closures, helping to expedite construction while maintaining as much access as possible. Officials said temporary closures at Greyhound Pass, 151st Street and 161st Street would be necessary, but the closures would be scheduled sequentially to minimize inconvenience to residents, businesses and motorists. More information will be shared at an open house planned for early spring.

Upgrading the existing highway between I-465 and Ind. 38 to interstate standards will be the largest and most aggressive road project ever attempted in Hamilton County. The new U.S. 31 Hamilton County project is intended to reduce congestion, improve safety and provide continuity of commerce and regional travel for a U.S. highway that stretches from Michigan to Alabama. For more information, visit www.us31hamiltoncounty.IN.gov.