You are at:Home»Current in Carmel»Carmel Cover Stories»On the fast track?

As support grows, Hamilton County will be asked whether it approves of expansion of mass transit 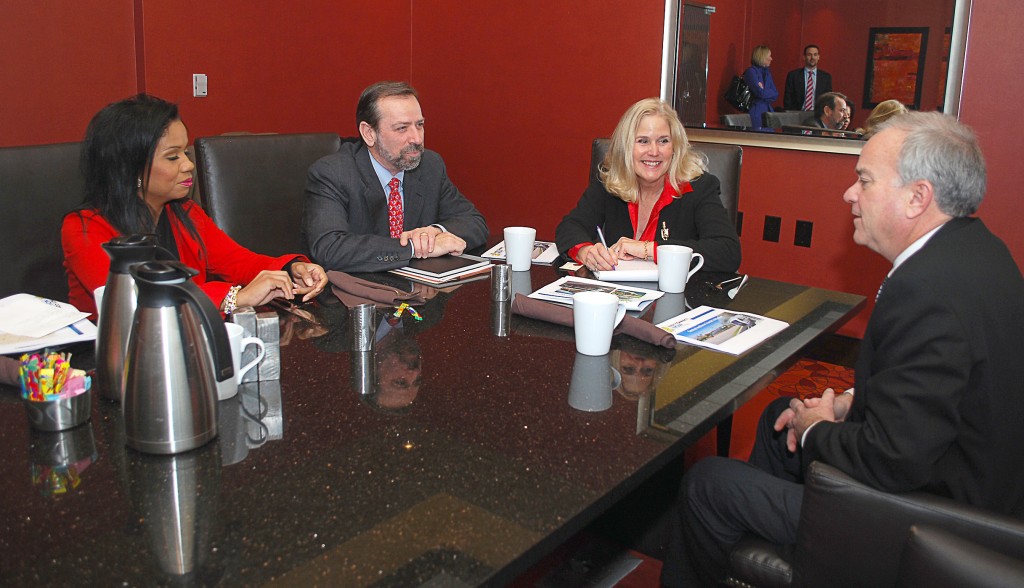 By Robert Herrington and Christian Sorrell

The community landscape is changing through new infrastructure, businesses, real estate and construction, but could mass transit further evolve Hamilton County? In the coming months, the discussion of a dramatic expansion of mass transit in Central Indiana will become more prevalent as community leaders and citizens support the idea.

Carmel Mayor Jim Brainard has made his support of mass transit well known over the years. For him, mass transit is not a new idea, but rather one that has been central to city government throughout history.

While people often point to singular moments like Indianapolis’ recent Super Bowl as a reason to invest in mass transit, Brainard sees it a bit differently.

“Carmel would have seen much higher activity here during the Super Bowl, but that’s not really why you build it. You build it for the day-to-day activity. Instead of driving downtown from Noblesville every day, you drive five miles to the mass transit station and get an additional hour or two of work in,” Brainard said.

Through the Indy Connect Now campaign, members of the Indiana General Assembly are urged to authorize a referendum that would allow a vote by Marion and Hamilton County residents on whether to fund the enhanced mass transit system. Indy Connect Now Executive Director Ron Gifford said an attempt to pass legislation did not succeed last year, but he was hopeful this general assembly would be different.

“Rep. Jerry Torr (R-Carmel) is committed to passing the bill with the support of a bipartisan group,” Gifford said. “We expect several other folks will sponsor the bill in January.”

According to Brainard, the decision should be left up to the voters themselves.

If a referendum is approved by the general assembly, Gifford said a special election could occur this fall or during the 2014 general election. A petition is available online at www.indyconnectnow.com. It will be shared with state lawmakers who are likely to take up the issue during the new legislative session.

“We have the basic idea of how the mass transit system will work but once the referendum is passed, then we can begin to hammer out the details. It doesn’t make sense to spend millions of dollars on engineering for something that may not pan out,” Brainard said. “Planning and engineering can be about 10 to 15 percent of the total cost of most projects like this which is a lot of money. You don’t want to spend that money unless you know you are actually doing it and have the money in place.”

Gifford said expansion of the transit system would begin in 2014, with completion of the entire plan expected by 2022. He said the benefits of mass transit included connecting people to new job opportunities and healthcare facilities, mitigating traffic congestion and improving the environment (i.e. air quality) with electric and hybrid electric vehicles.

“It’s a good option for people to get from point A to point B,” Gifford said. “It’s incentive for neighborhood and community development – development that wouldn’t have occurred otherwise.”

“I think (mass transit) helps us attract good jobs here in Carmel,” Brainard said, “which means more people will live here, it will mean good commerce and more companies will locate here. It’s like the Old West train lines. People and businesses wanted to live and work where the train lines were, because the other towns were dying off without them. I think it’s a very similar situation here and across the country.”

According to Gifford, an investment in mass transit could lead to real estate development featuring new businesses, shops and apartments that open along the new rapid transit lines throughout the county. Within five years of building a new 10-mile light-rail line in Charlotte, new development brought in $1.5 billion for a city smaller than Indianapolis. Noblesville Mayor John Ditslear and Westfield Mayor Andy Cook traveled to Charlotte to see the city’s light-rail as part of the Central Indiana Regional Council of Chief Elected Officials. Brainard was unable to attend.

“Charlotte is 10 years ahead of us,” Ditslear said, adding that Charlotte and other metropolitan cities have shown that a strong transit system attracts talented young professionals. “When I was younger, we went to where the job was. Younger people pick where they want to live and find cool jobs there.”

Phase I calls for five rapid transit lines from downtown Indianapolis to Carmel, Noblesville and Westfield, with modern transit vehicles creating faster connections along key routes, as well as six express bus routes to provide quick access between major commercial centers. These lines are expected to be installed between 2017 and 2020. In addition to more bus routes, the Indy Connect plan will help decrease wait times at transit stops from an average of 30 minutes to 10 minutes on all the major lines. One rail line from Union Station in downtown Indianapolis to Noblesville will be in service by 2021. A Bus Rapid Transit station is currently planned for Carmel. Indy Connect Now Executive Director Ron Gifford said these expanded transportation options would help retain and attract talented employees to Central Indiana. The Phase I project comes with a $1.3 billion price tag but Gifford said almost half of that would come from federal grants. “We think we are really well positioned there,” he said.

0.3 – Indy Connect Now is asking the state legislator to authorize flexible use of county economic development income tax up to 0.3 percent to create a dedicated transit funding stream. This tax would only apply if a local referendum is approved and the county opts into the agreement.

89 – Indianapolis is the 12th largest city in the country with a bus system that ranks 89th in the nation.