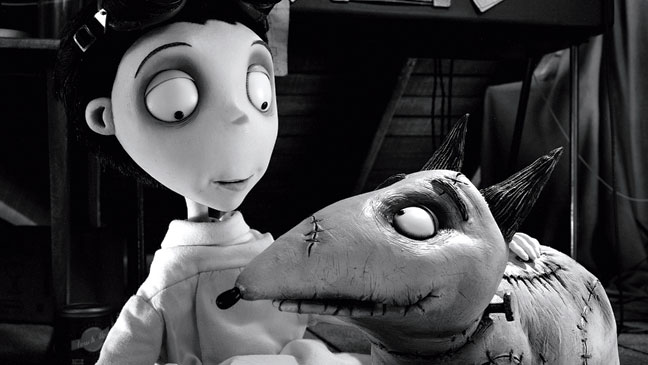 As a filmmaker, Tim Burton’s mostly been working on reanimation projects lately – taking old movies and making them rise from the dead as remakes crammed with computer-generated imagery. The results have been up and down, generally scoring at the box office but leaving lovers of his earlier work (I count myself) feeling disappointed.

If “Frankenweenie” has a fresher feel than most of his recent movies, that’s because it’s a remake of his own short film.

The original was live action, a black comedy about a boy who zombifies his pet pooch using Frankenstein-esque science. The spiffy new version is stop-motion animation, which suits the material well – a mix of heartfelt pathos and creepy-crawly horror movie elements.

Victor (voiced by Charlie Tahan) is crushed when his beloved dog Sparky is, er, crushed in a car accident. Indirectly inspired by his eccentric science teacher, Victor jolts the canine alive with electricity. But then the other kids in the neighborhood discover the trick, and soon the whole town is overrun with zombie pets.

Despite the subject matter, “Frankenweenie” is sweet-natured and should be suitable for all but the smallest children. And adults will enjoy the references to classic horror creatures, especially the classic Universal Studios menagerie.