You are at:Home»Current in Carmel»Whitney Emmert named group coordinator 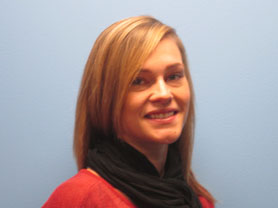 Whitney Emmert has been named by Little Star Center as Group Coordinator. In this capacity, she works with program managers, assistant clinical directors, and clinical directors to develop group programming for each of the learners at the Little Star and Middle Star locations in Carmel.  This includes organizing community outings, reading, math, language, music, sports and social group activities.

Whitney joined Little Star in 2011 as an ABA Therapist and quickly was promoted to Team Leader and now Group Coordinator. Prior to joining Little Star, she worked as a one-on-one instructional assistant with Westfield Intermediate School, and as a direct support professional with Opportunities for Positive Growth. Whitney holds a B.A. degree in history from Purdue University.

Little Star Center, Inc. provides a structured, sensory-friendly facility where children with autism receive individualized therapeutic intervention. Based on the fundamental principles of applied behavior analysis (ABA), Little Star provides an atmosphere where children, therapists, and families can interact, support each other and receive on-going training so that each child can reach their full potential at home and in a variety of settings outside of therapy.

Little Star Center received the 2011 Autism Society of Indiana’s (ASI) Excellence in Direct Care Award. The award is for providers who demonstrate excellence in direct care services to infant, toddlers, children, youth, and adults with ASD (Autism Spectrum Disorder) through their work in medical, educational, therapeutic, recreational or other settings using innovative and scientifically supported best practices in partnership with families and other professionals. Little Star celebrates its tenth year anniversary in September 2012.

ABOUT AUTISM: Statistics show autism has become the most rapidly growing serious developmental disability in the United States. And, autism diagnosis rates in Indiana mirror the national rate. One in 88 children will be diagnosed with autism in Indiana this year. Among boys, that number jumps to one in 54. In fact, autism affects more children annually than almost any other serious medical diagnosis.

The United States Surgeon General endorses intensive behavioral intervention for individuals with autism and other development delays.  More than 50 years of research documents the efficacy of applied behavior analysis (ABA) in reducing the inappropriate behavior and in increasing communication, learning, and appropriate social behavior.

Since the average cost associated with autism over a lifetime can reach $3.2 million, the cost of early treatment should be viewed as a good investment for improving the chances of a better life — as well as financially logical. Although there is no cure for autism, getting an early diagnosis and intervening with the most effective treatment early in a child’s life gives him or her the best chance of an improved outcome. Many children with autism experience significant improvement of their symptoms with treatment and as they grow older. The combination of treatment and time can give children with autism the best chance to lead a fulfilling life.