Carmel chef finds winning recipe in the fight of his life 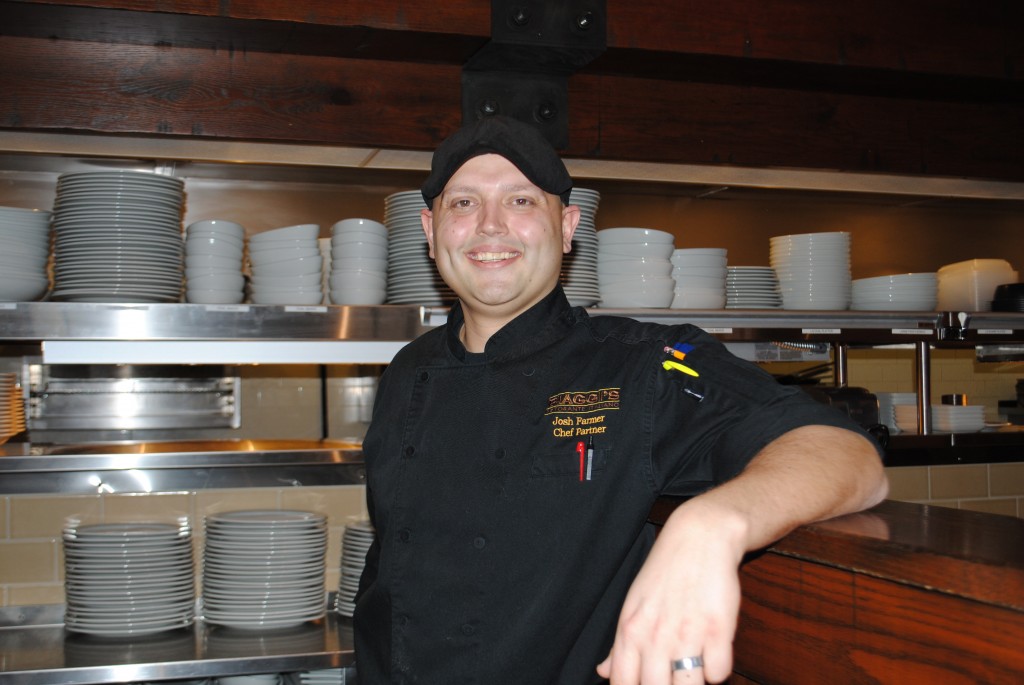 Josh Farmer had made a lot of stops in his young life before this summer. He’d left Indiana for stints in Minneapolis, Minn. and Palm Beach, Fla.; a restaurant worker by trade, when the locales were not exotic, the foods still were. There was Italian, there was Spanish, there were the Peruvian and Asian dishes he’d seen his grandfather prepare.

All that led to the stop no one ever wants to make: The oncology ward.

“Lymphoma,” Farmer says matter-of-factly while sipping coffee across the table from me in Biaggi’s, a newly-opened restaurant in Carmel’s Clay Terrace where he is a chef partner. “Non-Hodgkins lymphoma. Enlarged B-cell lymphoma, I think they call it.”

Farmer, all of 29 years of age, is foggy on the details of the affliction he’s been battling – and appears to have conquered – for the bulk of this calendar year. Why?

“I don’t know anything about my cancer,” he explains. “I might be the worst cancer patient in the world. I’ve never looked it up, never asked about it; all I asked was what I had to do to kill it. Because I was going to beat it.”

Cancer isn’t undefeated, but it is close; if you let a good team hang around for too long, they say in sporting circles, it will find a way to beat you. Farmer, a high school football standout, never lost the lead in his contest.

That’s not to say the score ever read all that comfortably.

“I was in Evansville,” Farmer recalls of the May night his symptoms began in earnest. “I was picking up some shifts (at that Biaggi’s location) and just was not feeling well. I went to the office to sit down, and the next thing I remember I was being picked up off the floor and the ambulance was arriving.”

Farmer had passed out after weeks of not feeling 100 percent – “I attributed it to not working out, not being as healthy as I could or should have been,” he admits – and, though he didn’t yet know it, his cancer journey had begun.

What followed reads like a month-long mix of a horrible hangover and a severe flu bug, with no relief in sight. There were night sweats, vomiting, headaches, fever, body ache, dizziness. Most alarmingly, there was no diagnosis to be had.

“I was told I had pneumonia in my right lung,” says Farmer, “and I was on those meds for about two weeks before I started regressing. Then they thought I had a viral infection, and that medication made me throw up for 12 hours straight, every hour. You could set a clock by it.”

He eventually ended up at the Indiana University Health facility in Indianapolis, where he was put through a battery of tests – CT scans, EKGs, blood samples, liver biopsies. Pumped full of antibiotics hoping to, “Blindly hit the nail on the head,” as Farmer puts it, he remained sick and eventually developed jaundice and became septic.

Each morning, his doctors would enter the room and his spirits would rise, only to fall again when he would learn they still didn’t know what his ailment was.

“By that point, I knew it was something not normal and not easy,” Farmer says. “I finally got to the point where I felt like, ‘Don’t come back until you can tell me something.’”

The liver biopsies eventually ended up helping his doctors do just that, and by mid-June Farmer had begun chemotherapy – “There is no way to describe what your body feels like after chemo; it’s awful but awful is not a good enough word,” he says. All the while, his wife and his employer kept a vigilant watch.

“I was on bed rest for all of July, and Biaggis was very supportive,” Farmer says. “That was fantastic. They had concerns about if they were going to have a chef ready for the opening, but I kept assuring them that I’d be back. There was no doubt in my mind.”

And apparently, no doubt in his wife Lindsay’s, either.

“As strong as my wife was through all of it, there was nothing I could do but stay,” says the father of Ava, not yet 2 years old. “There was never a second where I said, ‘This is it for me.’ Nothing was going to take me away from either one of them.”

Though the chemotherapy process ravaged Farmer’s body, dropping him from a robust 240 pounds to 190, his recovery has been remarkable. He returned to work on July 28, completed his final chemo session on Oct. 11, has regained all but five to 10 pounds of his lost weight and reports that he has more energy now than at any point in the past two years.

“It’s a daily thing,” he says. “I feel great, I really do. The doctors said by my third treatment my numbers looked like someone who has never been on chemo and has never had cancer. They’ve been very impressed with my level of progression.”

What’s more impressive is Farmer’s demeanor about such a sobering situation. He’s not unfazed by the whole ordeal; more like unflinching.

“Life looks different now,” he says simply. “You get that sick, little things don’t matter. I feel like I take things more in stride now. I’m still focused, but when things go wrong it’s not the end of the world.”

Like any good teammate, Farmer is quick to praise those who helped ensure he still has more stops to make.

“My doctors were all phenomenal,” he summarizes. “I had 100 percent faith in all of them. Without the support of everyone in my life, I would not be where I am. I have to give those people more credit than I do myself. The biggest part was definitely the love of my wife and daughter. I fought for them and everything I do, I do for them.”