You are at:Home»Current in Fishers»Up, up and away 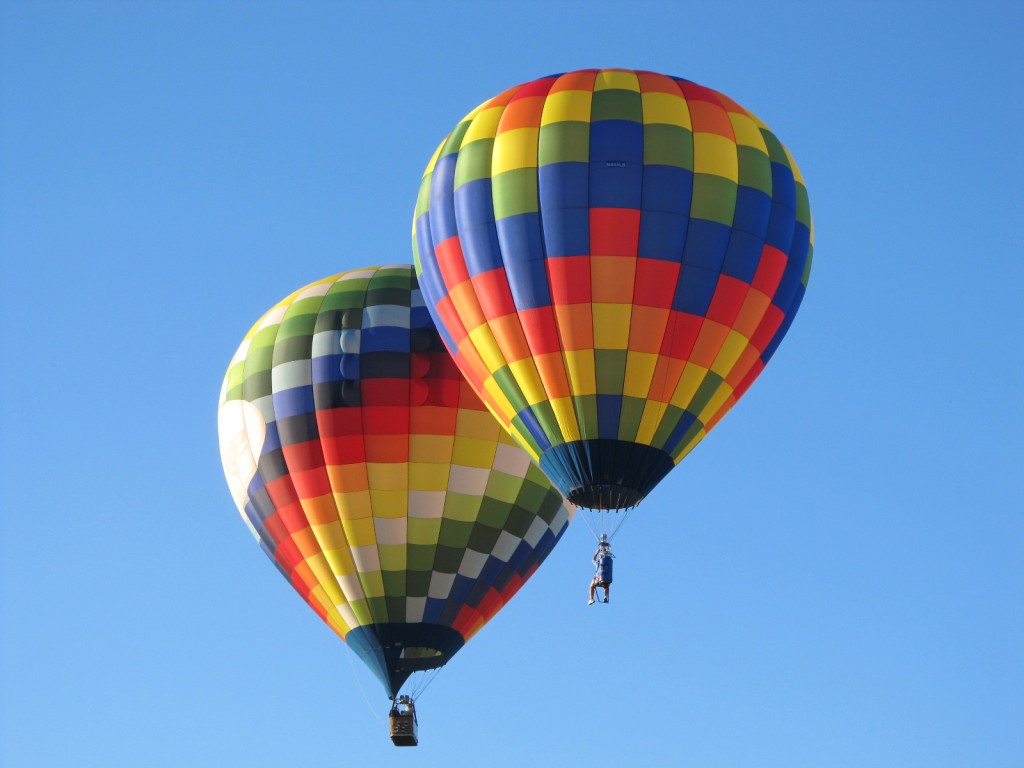 Gary Tarter doesn’t particularly care for heights. He doesn’t get up on his roof, can’t ride the Ferris wheel and has no plans to go skydiving any time soon. What he does enjoy, however, is a bit of a surprise in light of these admissions.

Tarter regularly pilots what is known as a Cloud Hopper – a one-person hot air balloon – and swears he doesn’t feel the height when he is aloft, moving with the wind and floating across Hamilton County.

The retired Fishers resident has been piloting balloons of various types since 1976, when he bought his first one for $6,000. It was just six months prior to that first purchase that he saw a colorful hot-air balloon for the very first time.

The pilot invited Tarter to spectate, and he got hooked.

It was at that event that Tarter met a pilot from Peru, Ind. and traveled with him to Ohio for a race the very next week. The time in between races was spent trying to convince his wife that they could afford to purchase such a craft themselves.

“Gary called me that first day and said ‘I’m following this balloon. I want to buy one!’” Linda Tarter said. “I was already a bit of a golf widow; I didn’t want to be a balloon widow, too.”

With light plane piloting experience from the Army, Tarter had some knowledge of what flight entails, but Linda couldn’t read a map. Now she is his number one crew member and chases him in their passenger van by “following her nose.”

Getting the Cloud Hopper – which has only a pilot seat with the propane tank strapped to the back – off the ground takes more than two people, so the Tarters rely on additional volunteer crew members for help.

“I thought I could fly it without help, but you still need a crew,” Tarter said. “I do enjoy being up there on my own, though, and piloting the Hopper itself.”

Tarter said he is one of only 25 Cloud Hopper owners in the United States.

Nothing is left to chance when launching a Cloud Hopper or any other balloon craft, according to Tarter. A group of pilots generally meets together in a central location, with maps, weather reports, wind charts and a helium-filled balloon to send up for higher wind direction and speed estimates. They then designate a location to launch, plot a potential path and discuss several landing points.

Then the rush begins to get to the launch site and in the air while the weather holds good and before the sun gets too low.

“It’s just fun,” explains Tarter. “Everybody enjoys it and seems to be as excited about it as I am. When I land in someone’s yard or a neighborhood park everyone runs over to see and to help. Most people love us and we love interacting. This is a very friendly area.”

Only once or twice has Tarter encountered an angry landowner and avoids landing in places where he feels he might not be welcome unless weather conditions force him to do so. Usually Linda is not far behind in the van to help him out of any sticky situations – a job she says is made easy by radios and cell phones.

Linda appreciates help from onlookers who gather when Gary lands and encourages those who see a balloon land to come and meet them.

“Don’t be bashful,” states Linda, “come talk to us and help if you can. This is a fun thing to share.”

For more information on Cloud Hoppers and ballooning in Indiana, visit www.cloudhopper.org and balloonindiana.com.