Carmel architect as made a name for himself in motorsports 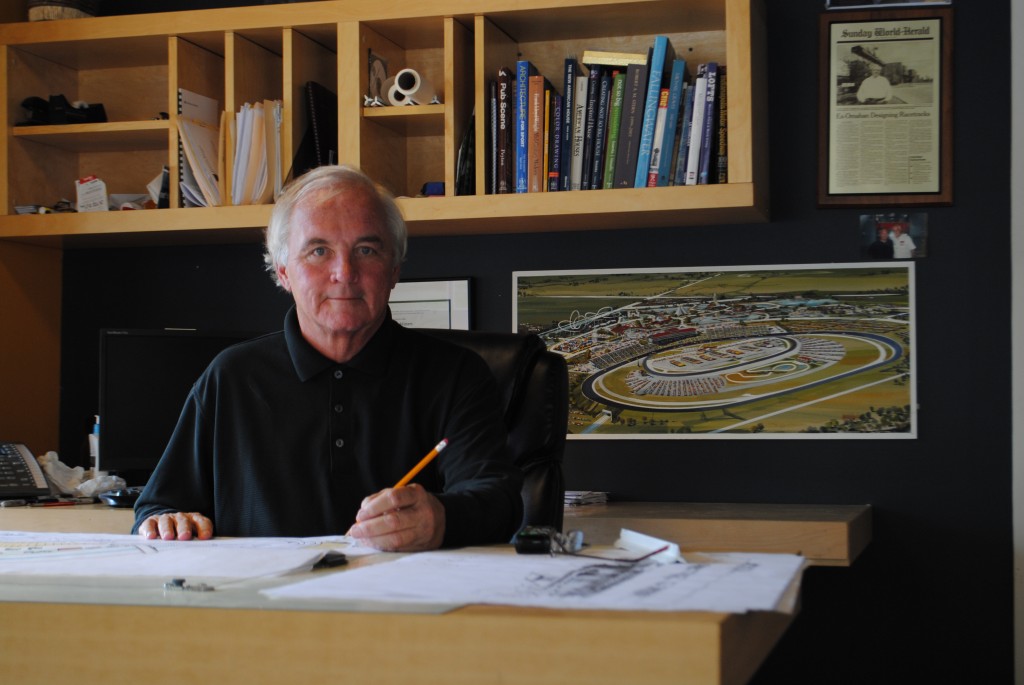 In 1970, an 18-year-old Paxton Waters walked into the University of Nebraska. His intention was to sign up for courses about, and eventually major in, engineering. His father was an engineer, Waters was good at math and all the attendant subjects, and so it simply made sense for the apple to fall near the tree.

That is not what ended up happening.

“I was there for about three hours, and the line never moved,” Waters says while seated comfortably in a deep armchair in his downtown Carmel office. “I looked over at the architectural line, and there were only five or six people there. I thought, ‘I’m good at art, too.’”

“I switched lines. It worked out.”

It certainly did. Since that fateful decision – “Everybody thinks it’s some Frank Lloyd Wright inspiration, but it’s not,” he says when asked if the line switch was preordained – Waters has turned a kid’s chance into a passion, a lark into a life.

“I was 18 years old and I was good at all of the above,” Waters says of his decision to stick with his whim. “When you’re 18 and going to college, often you have no idea what you want to do. It sounded like a good idea.”

Today, Waters provides the namesake in Paxton Waters Architecture. He’s owned and operated his own business for 12 years, lived in Carmel for 23; before that, there were stops in Dallas, in Denver, in Omaha. He’s designed everything, from office buildings to theaters to residences.

The current focus? He designs racetracks – some of the best.

“I was recruited by an (Indiana) engineering firm to run its architectural department,” Waters says of his introduction to both the Hoosier state, and racing. “We did work at the Indianapolis Motor Speedway, and I led the design efforts there and got to do some of the buildings (during an early Nineties remodel). I met Roger Penske and he wanted to build a track in California. To make a long story short, that’s where I started designing tracks.”

The list may have started with the California Speedway (now Auto Club Speedway), but it does not end there. Waters’ design accomplishments include, among others, facilities in Brazil, Chile, Las Vegas, Nev., Pikes Peak, Colo., Newton, Ia. and the dirt track in Lawrenceburg, Ind. They are home to NASCAR, IndyCar, USAC events and more, and represent the cutting edge in racecourse development.

It is the Iowa circuit, however, that is Waters’ gem. It is a 7/8-mile track renowned for its raceability and smoothness. Opened in 2006, it has seamlessly hosted premier series as well as sprint and midget cars.

“I did the Iowa Speedway, and I basically am the prime designer on all of it,” he says. “The grand opening was the best ever, and I’m most proud of it. I had compliments from major drivers, and they all love it. That’s extremely hard to do. It’s about what the drivers and teams think of it; if they love the track, that’s good.”

Strangely enough, Waters had little interest in racing prior to his indoctrination into the sport. But now, the avid golfer counts some prominent names as both friends and co-workers. Former Formula One and IndyCar driver Derek Daly, as well as NASCAR champions Jeff Gordon and Rusty Wallace, have partnered with Waters on several projects.

Wallace was a key Iowa counterpart – “Drivers should never design tracks; you can never take them verbatim, because (different series) can’t handle different things,” says Waters – but Gordon is heavily involved in the latest project. It is a one-mile track in Ontario, Canada that will open in 2013, and is more than four years in the making.

“One of the biggest factors in racetrack design is permitting,” Waters says. “It depends on where it is. Canadian Motor Speedway has taken four years to get approvals; it takes longer for the jurisdictions to say, ‘Go ahead and do it,’ than it does for the design and building.”

There have been, however, some misfires. Waters spearheaded a project at the former one-mile dirt Michigan State Fairgrounds track in Detroit that was dumped due to noise concerns, as well as a Riverside, Calif. venture and a Donald Trump development in Bridgeport, Conn that did not succeed.

Disappointments, though, are but part of the game.

“I’ve spent a lot of time and effort on things that didn’t work,” says Waters. “I have to be a facilitator and a monitor. I don’t want to go faster, and slower quite often is a lot better view. It’s a fun exercise.”

These days Waters’ life is as it, for quite some time, has been. He’s married to his wife of 38 years, Rosemary. The couple still live in the same Monon Trail-adjacent home they bought more than two decades ago. Waters doesn’t often walk to work, but loves both his location and vocation.

“I think everybody needs to simplify,” Waters says. “That doesn’t mean I don’t want to get things done, I just want to change the pace. I love where I live, and where I work is fun, too. I really haven’t given quitting any thought at all.”