You are at:Home»Current in Zionsville»A Fox tale 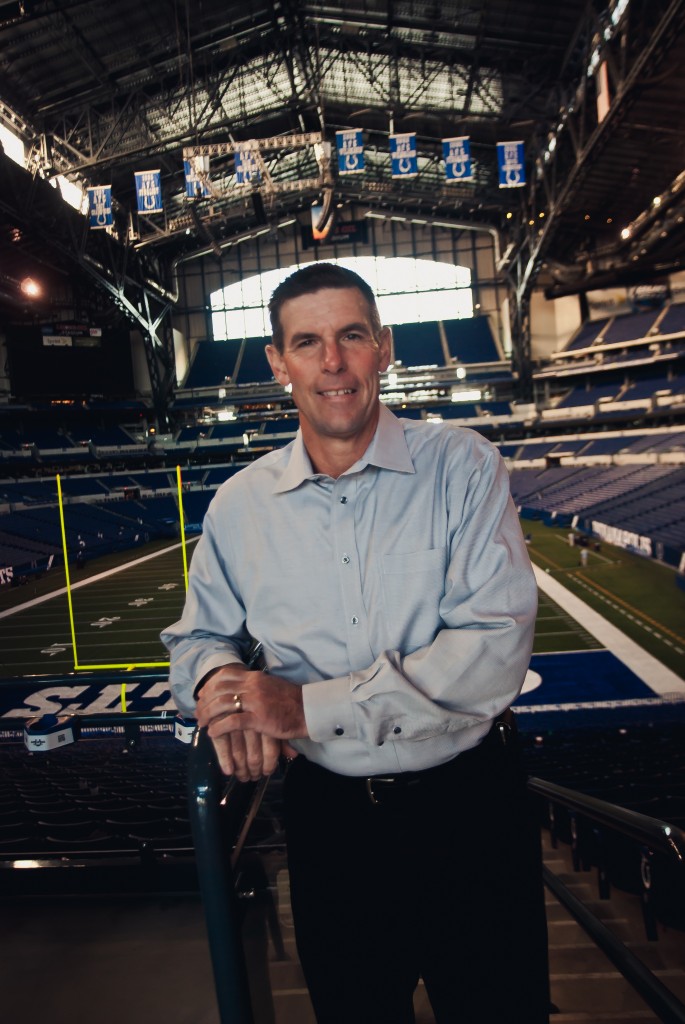 It’s a big building, with big visibility. There’s a big job to be done and big responsibilities to be shouldered.

The funny thing is, the man with all that on his plate prefers things to be just the opposite.

“I have no ambition to be the biggest and best,” says Mike Fox, Zionsville resident and Director of Indianapolis’s Lucas Oil Stadium. “It’s kind of like being a referee: If they didn’t notice you, you probably did a good job.”

Fox has been doing just that for more than two decades, first as Director of the Hoosier (RCA) Dome and now its successor just across South Street. He is simultaneously the main man at the controls of one of the world’s most cutting-edge facilities and a person who seeks to delegate instead of coveting the limelight.

That approach has worked well; early on however, Fox had no inkling his future held such a lofty position.

“The summer after my senior year at Indiana University, I still had to complete an internship as part of my curriculum,” Fox explained.

Not having wanted to take a semester away from studies and other interests in Bloomington – more on those in a moment – that summer of 1984 was the perfect time to assume such a position. As fate would have it, the then-Hoosier Dome had just been completed.

“Just after my senior year, the Dome had just opened and I thought it was a good place to start,” said Fox. “I liked that there was variety there. I set up an interview with a man named Steve Hartman for my internship.”

It was that encounter with Hartman that changed Fox’s path for good – and also where we come back to Fox’s other collegiate interests.

“I was a student manager under Bob Knight for four years,” Fox said. “Hartman took one look at my resume – literally one look – and said, ‘You were a manager for Coach Knight?’ I said I was. He said, ‘Well, if you can handle that bull****, you can handle this.’ He hired me on the spot.”

Fox interned for three years, dabbling in all facets of the Dome and Convention Center’s operations – “I was interested in stadiums,” understated Fox – before being named interim Stadium Director after Jerry Oliver left to pursue an opportunity with the present-day Tampa Bay Rays.

“After a period of four or five months of being an interim,” Fox said, “they ended up giving me the job of running the stadium. I was 26-years-old. And I was scared to death.”

If Fox is scared any longer, his reputation and track record certainly don’t tell the tale. He has overseen both men’s and women’s NCAA Final Fours, concerts, motorsports programs, high school football state championship games, countless other events – and likely every Colts game ever played in Indianapolis.

“There’s a question as to whether or not I missed one in the first couple years on the job,” Fox deadpans. “But other than that, I’ve seen them all.”

“Seen” is a relative term in Fox’s vocabulary – he rarely watches a single play on game day.

“I figure if I’m watching the game, it’s taking time away from something else I should be doing,” he said. “And I don’t want my employees seeing me taking a break – that’s not the kind of example I want to set.”

Fox believes in delegation – “Over-management hinders creativity,” he says – and that’s a mantra he carried right up through his biggest event to date: February’s Super Bowl.

“We treated the NFL just like anyone else,” said Fox. “They left here thinking it was the best experience they’d ever had. We worked every day between Jan. 2 and Feb. 18, and worked a little bit harder than normal. It was great for everyone – except my family. Didn’t see them much.”

To sit across from the man and watch his face as he delivers it, one knows there is no pretense when he says, “I’ve had other (employment) offers, but I believe in putting down roots and helping your community be as good as it can be.”

To look at the big building at the corner of Capitol and South is to be certain Fox knows a little something about making things as good as they can be.