You are at:Home»Current in Fishers»Making a difference 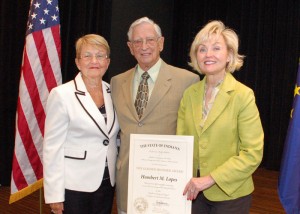 Lopes with an official and Lt. Gov. Skillman

At one point in his life, Humbert Lopes, was called a “triple-headed monster.”

During his time with the 98th Bomber Wing during a three-year tour of duty in WWII and a two-year tour in the Korean War, Lopes, 87, was a bombardier, navigator and radar operator on iconic aircraft like the B-29 Superfortress.

The long-time Fishers and Hamilton County resident was recently recognized for his service as a volunteer with the Hamilton County Council on Aging. Today, the council is sponsored by a non-profit organization called CICOA, a AAA organization, which administers funds and works with various aging programs. The Council on Aging is the last rung in a ladder of sponsorship that includes the Indiana Family and Social Services Administration.

Lopes was also recognized by Lt. Gov. Becky Skillman during this year’s Indiana State Fair with the Golden Hoosier Award, also in part for his work with a money management program that helps seniors stay on top of finances.

Skillman and the Indiana Family and Social Services Administration established the award, recognizing “seniors who work hard to improve their communities, help others and serve as mentors and caregivers,” according to a press release from the Indiana House of Representatives.

“Humbert’s enthusiasm for helping others and his will to make a difference has made a considerable impact on our community,” said Rep. Kathy Richardson in release. “His commitment to volunteerism is honorable and inspiring.”

His work in Hamilton County started when he moved to the area to work at a Firestone operation in Noblesville.

“As you look back when you’re older, you say how did I get where I am,” Lopes said. “and how did somebody say go to Noblesville, Ind. God is my direction.”

Before Lopes could climb the ladder at Firestone Industrial Products, eventually securing a job as a division president at the Noblesville location, Lopes first experienced two wars and four years of college.

Originally from Massachusetts, Lopes remembers passing by a post office during war time – when the draft was in full swing – and seeing a poster that simply read “learn to fly.”

He talked to the representatives at the post office, passed a two-year college equivalent exam and a physical and was on his way to a cadet program.

“I passed the physical, and I told the Army to go to hell,” he said, laughing.

In between WWII and the Korean War, Lopes earned an engineering degree that he put to use at Firestone, as well as Natick Chemical Laboratories in Massachusetts, developing a new gas mask and, eventually, helmet liners that help defoliate a bullet on impact, a principle used in today’s bullet-proof vests.

He said he was brought into other divisions of Firestone as a problem solver. He would later help solve the problem of money management for senior Hoosiers.

Lopes got involved with the Hamilton County Council on Aging in the early 90s when AARP sent him a letter asking him to help with a money management program that would aid citizens in the state, which was also under the charge of the FSSA. He said he was invited to a meeting, at which many attended. In the end, he was selected to head the program up. The money management program aims to train clients on how to handle paying bills in today’s age and assists those who have physical disabilities. Lopes and other volunteers sometimes take clients grocery shopping. According to Lopes, the program, meant to help those who can’t control or monitor monthly spending, was offered to the states, and Hamilton County was one of the first areas to participate.

The program is designed to help folks track and manage their finances. If that means getting authorization from Social Security to use a client’s funds to pay specific bills, or even just making sure specific monthly bills get paid.

He said banks are “merciless” in how they handle people who are typically his clients. Clients that can’t qualify for credit cards.

In some situations, Lopes completely represents a client’s finances.

Lopes said other would-be volunteers should get involved if they have a passion for people or organizations.

He said organizations like Cicoa are what Hamilton County needs.

“They (volunteers) have to want to be part of it,” he said. “You have to have the heart for it.”