You are at:Home»Current in Carmel»Carmel Community»Donatello’s growing, but not outgrowing 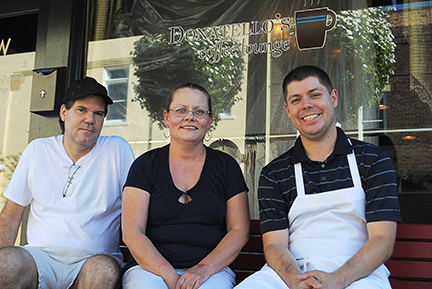 It has recently expanded, but that doesn’t mean any charm or appeal has been lost. Quite the opposite, in fact.

“(Downtown Carmel) is a great area, and I believe in it,” said Patrick Aasen, chef and proprietor of Donatello’s. “I love it. There’s a sense of community you don’t get elsewhere with the walkability; and the opportunity came up to do something else here.”

That something was the addition of a coffee shop, which is now open, and a nearly three-fold expansion. The restaurant, which opened in 2010 and was originally 800 square feet, now occupies an adjacent building and has a square footage of roughly 2,800.

“We’ll open early so you can get that cappuccino on the way to work,” he said.

“But we’re also going to be open later so people will be able to have a coffee while they wait for a table, or have one and dessert after their meal.”

The renovation maintained Donatello’s intimacy. Now also occupying the space where Pizza King once stood, the restaurant kept its red walls and has two smaller dining rooms as opposed to one large, open area.

Another huge upgrade is outdoor seating.

“We had a chance to move to the spot on the (southwest) corner (of Main Street. and Range Line Road.),” Patrick said. “But if we had done that, we wouldn’t have had any outdoor seating. What we have now is much like you’d find in New York City.”

The growth also has allowed Donatello’s to add a pizza oven, something it had no room for previously. Adam adds that, “Food is coming out of the kitchen much more quickly now because (Patrick) has a lot more room to work.”

Patrick agrees with that assessment.

“We were working on top of each other in the old space,” he said. “I would always joke with Carmel ladies that their shoe closets were bigger than my kitchen. Then they’d look in there and say, ‘Oh, yeah, you’re right!’”