You are at:Home»Current in Westfield»Lighting the way 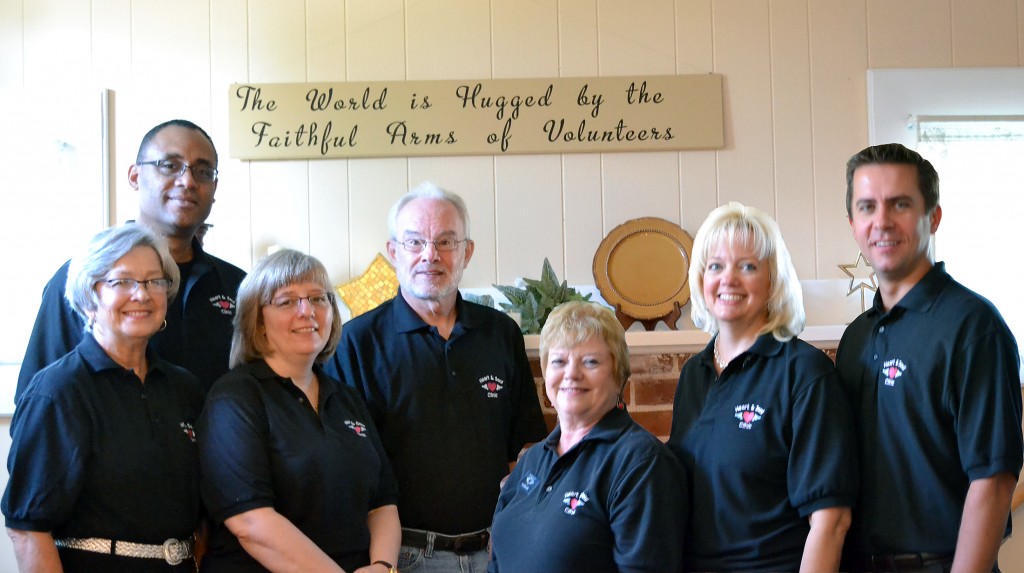 Every September, the Westfield Chamber of Commerce recognizes special residents and businesses that makeWestfieldunique with Lantern Awards. The main awards presented are Business of the Year – Lantern Award; Citizen of the Year – Beacon Award; Volunteer of the Year – Wick Award and also this year the Outstanding Service Organization – Globe Award. 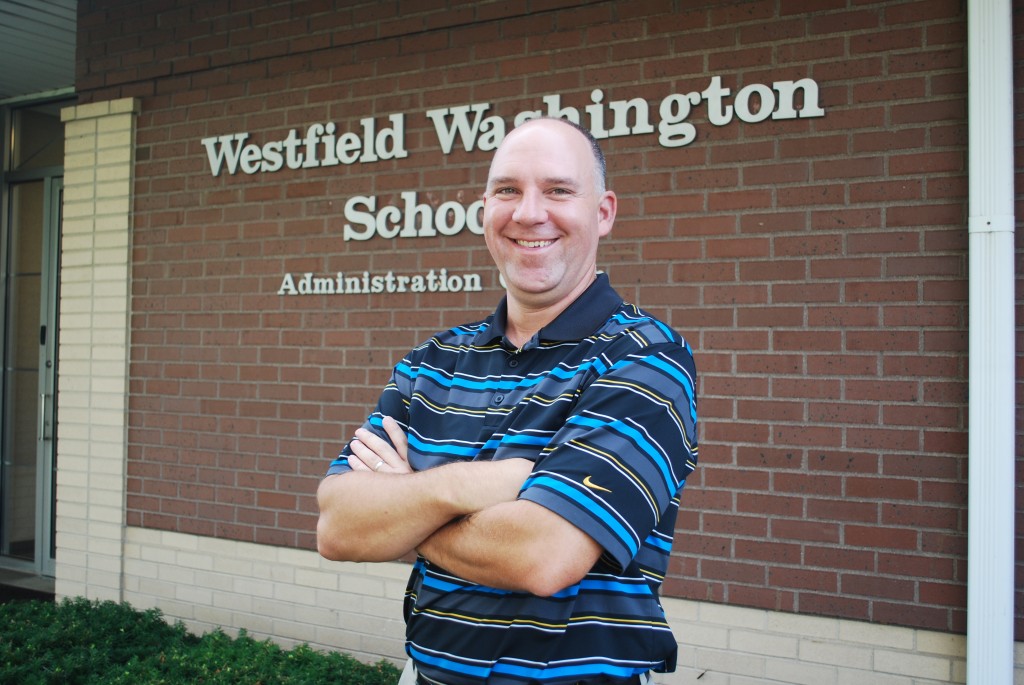 Citizen of the Year – Duane Lutz

As the former Chamber of Commerce board president, Duane Lutz has handed out several Beacon Awards. This year, the longtime chamber member will be on the receiving end.

“It’s very humbling to receive the award,” said Lutz. “Having emceed the event a number of years, it means that much more. I know a lot of the people who won it in the past and to be in that class makes you feel good.”

Lutz is the president of Hoosier Glass Co., Inc. which his grandfather started in 1956. He and his wife, Crissy, moved to Westfield in 1994 and shortly thereafter Lutz joined the city’s Lions Club and Chamber of Commerce, and has been an active member ever since. He has also serves on the Westfield Washington Education Development Foundation as president.

In June, Lutz was appointed by the Westfield Washington Board of School Trustees to fill the District 3 seat vacated by long-time board member Tom W. Mullins who retired and relocated toFlorida. With three children – Hana, Ethan and Isaac – in the school district, Lutz said it gives him a good reason to be involved. 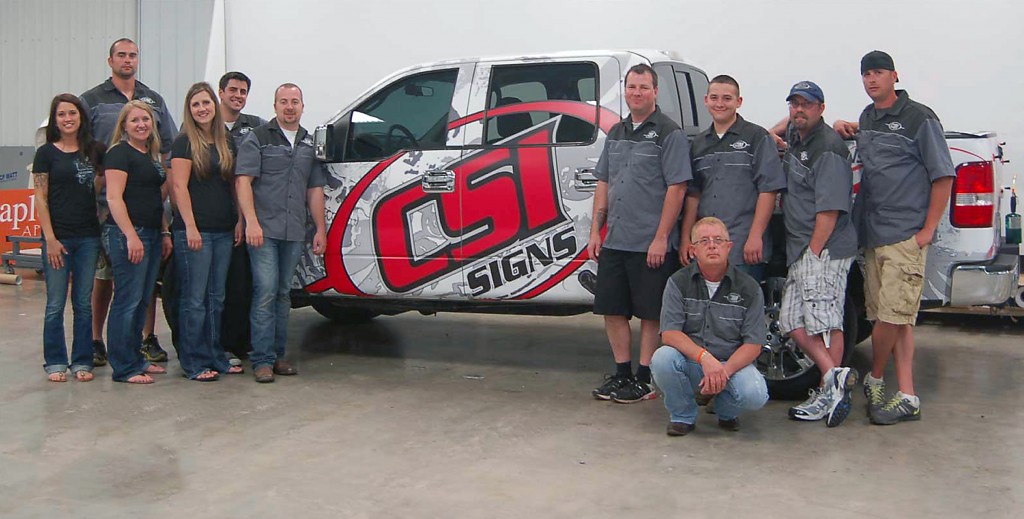 Business of the Year – CSI Signs

This year the Westfield Chamber of Commerce will recognize CSI Signs with the Lantern Award for Business of the Year.

“I was shocked that we received the award,” said Chad Huff, president of CSI Signs. “We have put a lot of time and effort in to the community, but there are a lot of other people and companies that do the same.”

Huff started the business in 2001 when he noticed a void in sign companies around centralIndiana. The CSI Signs team works together from design to installation with a wide range of capabilities and technologies; resulting in a 95 percent customer-retention rate.

In 2010, CSI Signs began to get involved in improving theWestfieldcommunity.

“I sat down with two people from my sales team – Amber Willis and J.R. Knight – and asked where they would like to get involved in the community,” Huff said.

“We want to be involved in building up the downtown,” added Willis, who explained she, along with other employees, helped expand the farmer’s market, Grand Junction Funktion and other events that have the capability of bringing people to the downtown area. 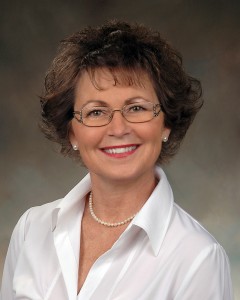 Volunteer of the Year – Cindy Olson

“I was very surprised and taken back – like, ‘why me?’ I know some very deserving, dedicated people who won this award. I just do what I do not expecting any recognition for giving back to the community and volunteering,” Cindy Olson said of winning the Wick Award.

Olson said she became involved with volunteering through the Westfield Rotary Club – she recently finished a term as president – and her job withinWestfieldCity Hall.

“The city highly promotes its employees getting involved and volunteering,” she said, adding that some of the events she has participated in the past year through the city are food pantry fundraisers andWestfield’s Race for the Cure.

While the club only has 38 members, the Westfield Rotary is quite active in the community with meals on wheels, open doors food pantry, high school student leadership and college scholarships and book donations to the public library.

Olson said the Rotary’s signature program is the sensory garden atFreedomTrailPark, which is designed for people of all abilities. The garden includes swings for wheelchair-bound children, various playground equipment and landscaping which appeals to four of the five senses. 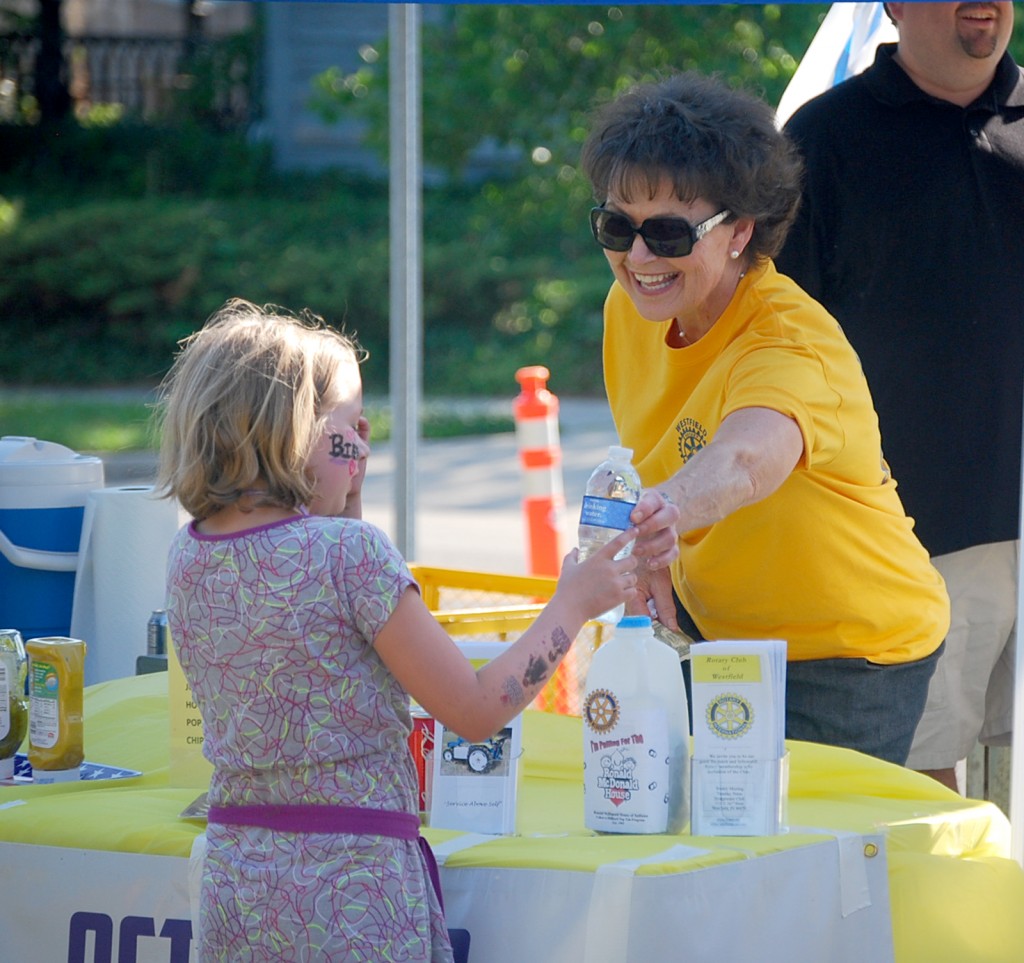 Cindy Olson hands over a bottle of water at the Westfield Rotary Club’s booth at the farmer’s market this summer. (Photo by Robert Herrington)

The Heart & Soul Clinic, a warm and inviting clinic located in a house onPenn Street, will be honored this year with the Globe Award.

In 2007, Sandy Kirsch, a nurse with 20 years of experience, felt an urge to create a clinic for the uninsured or underinsured.

Two years later, Kirsch started the clinic “with the help of several people, companies, organizations and one talented, hard-working handyman.” Those who enter the clinic will see the heart and soul of the nonprofit clearly written above the doorframe: “Love the Lord thy God with all thy heart and soul…”

Since it opened in 2009, Kirsch estimates the clinic serves 250-350 people during the three hours the clinic is open on the second and fourth Saturday of each month.

“We have many wonderful and dedicated volunteers I would like to thank. Our providers are Dr. Suzanne Montgomery, Dr. Lisa Marie Austen and Anne Willet, nurse practitioner,” she said.

Kirsch is optimistic about the many possibilities of extending the outreach of the Heart & Soul home. She spoke of adding dental equipment in the small house and starting classes on how to handle diabetes or finances.

“The use of Lantern components was incorporated to compliment the logo used by the Chamber,” explained executive director Julie Sole. “The Lantern representsWestfield’s tie to the Underground Railroad.”

Held each year in late September, the event is designed to bring the community together and provide an opportunity to share an evening of food, fun, and entertainment while the recognizing and honoring special residents and businesses.

“It is the hope of the Chamber that each guest who attends the Lantern Awards will find the evening enjoyable as they meet new friends and learn a bit more about what makes the community ofWestfieldunique,” Sole said.

The 2012 Lantern Awards will be held at the Palomino Ballroom on Sept. 22. Tickets are available for $50 per person. Reservations are required by Thursday and can be made by calling 804-3030.