You are at:Home»Current in Fishers»Hamilton County Election Board defines merger voting blocs

In a 2-1 vote, the Hamilton County Election Board interpreted and defined voting blocs for the referendum on town government coming up this November.

The voting members of the board – Peggy Beaver, Democrat board member Keith Clock and Republican board member Matt Strzynski – spoke on the issue, as well as Kathy Richardson, state representative and election administrator. In addition, various legal counsels addressed the board, including Speaker of the Indiana House of Representatives Brian Bosma.

At the board’s Aug. 30 meeting, the first order of business was to address a question from Fall Creek Township about rescinding the town of Fishers and township merger question altogether.

Richardson said she did not encounter codes that allow for rescission in any of her research, discussions with the Indiana Election Commission or the county attorney.

“I feel like we have done all the research to confirm that the election board has no jurisdiction in terms of withdrawing this question from the ballot,” she said.

County attorney Darren Murphy said the board has no purview under the Government Modernization Act of 2006, and if proponents wish to see the question rescinded, they must seek the court system. The act, as well as statues and laws in the Indiana Election Code Book, was implemented in all of the proceedings, according to Beaver.

Scott Chen, of law firm Faegre Baker Daniels, LLP, represented Fall Creek Township trustee Jeff Hern and spoke as the township’s legal counsel. He said he was hired on behalf of the township to look into the question.

Fall Creek Township board member Doug Allman, the author of the resolution who requested the board meet and discuss the issue, later said that the Fall Creek Township Board has never met with Chen. The township’s regular legal counsel, Jeanette Kassebaum, was present at the meeting but did not speak.

Turning to the second matter at hand, Richardson brought up the question of how votes are counted in the upcoming referendum.

Richardson said she worked with MicroVote to ensure proper “lockouts” are in place so that the right voters are eligible to vote for certain questions. For example, Fall Creek residents that are not residents of Fishers won’t be able to vote on the question that determines if Fishers becomes a class two city.

After those parameters were set, she said discerning how votes are tallied was tackled, which brought the Modernization Act back into consideration because the geographic size of the two merging political subdivisions determines voter blocs.

She said because the town of Fishers is the larger geographic entity, both votes (unincorporated and incorporated) in Fall Creek will be counted with Fishers as one bloc. The second bloc will be Delaware Township voters. Only Delaware Township residents located inside Fishers town limits will vote on the city question.

“Based on the law and based on other opinions we have received, that is how we have set the ballot and how we set the totals,”Richardson said.

After Richardson’s remarks, representatives speaking for both sides of the argument addressed the board. 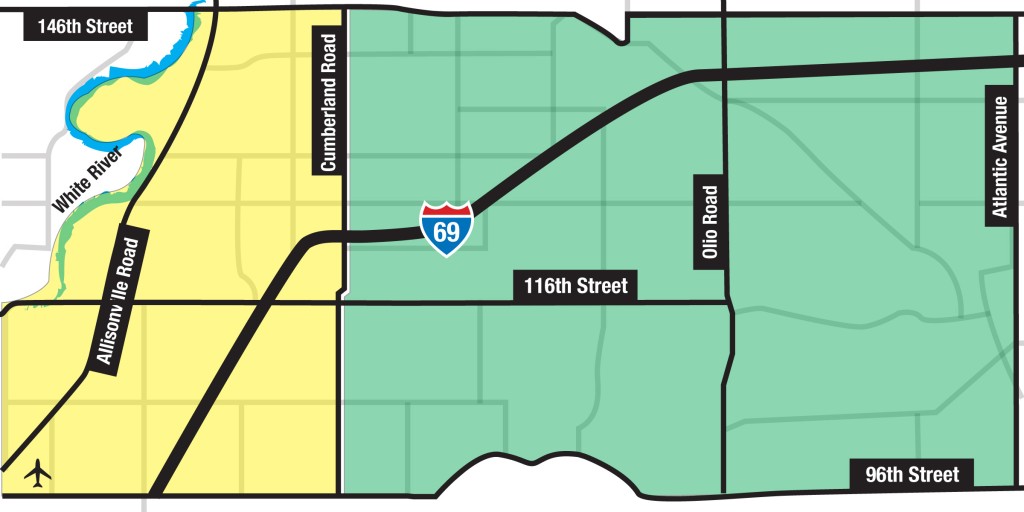 On the side questioning reorganization was Brian Baehle, who served on the planning and zoning subcommittee, attorney Anne Poindexter, representing a Fall Creek Township resident, and Allman.

Chen, town of Fishers attorney Jennifer Messer and Speaker Bosma spoke on determining the blocs and interpreting the law itself.

“The statute’s clear that we can talk about legislative intent,” Bosma said, “but, clearly, if the statute is written in a way that can be read and interpreted by a normal person, nothing beyond that is to be observed.”

Allman said a minority of people will be overwhelmed and described the way the issue was being handled, as well as the construction of the ballot, as “fundamentally wrong.”

Before a motion was made to interpret Indiana Code and establish the voting blocs, election board member Clock said he felt for the township’s position.

“I agree with councilman Allman that the ballot question is deceiving,” he said. “I think the Fishers interpretation does go against the spirit of the law… You’re correct in pointing out that the township voters are being drowned out.”

Wayne M. Crane, contact for the political action committee Citizens to Reorganize Fishers, spoke for the group in a phone interview with Current in Fishers. He said the group supports the Election Board’s decision “whole-heartedly.”

Crane said, “It’s time to let the voters decide what they think is best.”