You are at:Home»Current in Westfield»Missing teen returns home safely 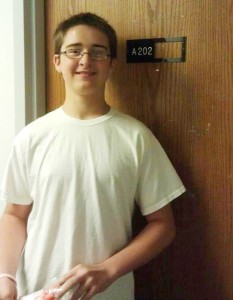 Matthew Baker was reunited with his mother in the Westfield High School parking lot, 18250 N. Union St., 37 hours after he was reported missing.

Baker was spotted by a passerby and when approached, he identified himself. The passerby called the police to report that she was with him, and he was safe at approximately 9:30 a.m. on August 4. Westfield Police officers began searching for Baker, 15, at approximately 8 p.m. on August 2. He was last seen around 2:40 p.m. earlier that day when he was dropped off at football practice.

Police officials said Baker never made it to football practice. He sent his mother a text later in the evening stating that he wanted to spend some time with his dad in Noblesville and requested a bag be packed and brought to the school. Noblesville Police assisted WPD by speaking with the father only to confirm that Baker was not present. Westfield Police officers began working with Matthew’s family in locating him and considered him to be a juvenile runaway at the time. Police officials said Baker was staying at WHS during his time away from home.