You are at:Home»Current in Zionsville»From East to West 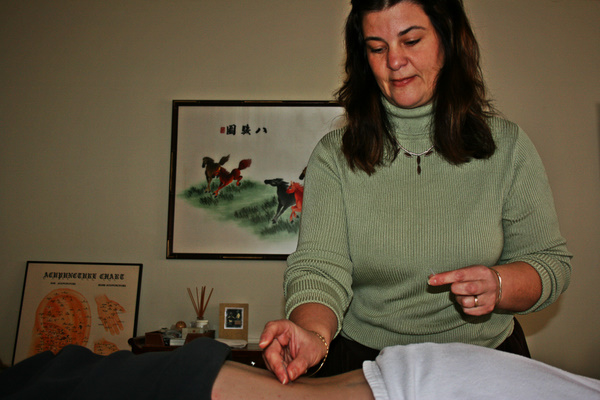 “Western medicine chooses to ignore things because we’re too arrogant,” she saidin that sunny kitchen, with no hint of a smirk. “Here, they don’t teachthe history of medicine in any school. We don’t need history here because whatever we do is the best. It’s arrogance beyond imagination.”

“She” is Angelica Kokkalis: learner, healer and firm believer in Chinese medicine. She applies the tenets of the latter each Tuesday within the walls of her Zionsville practice, located at1620 W. Oak Street.

Given that quote– and 10 minutes of discourse – one generally deduces that Kokkalis’ distaste for the current state of American healthcare is surpassed only by her fondness for Easternhealing. That inference is an understatement.

“If we say the wisdom and healing comes from China, we lose credit,” she asserts, tangible anger prodding her voice to rise an octave above its usual tone. “We need to be more humble as doctors; we are servants of people and God.”

Kokkalis was born in Greece and, as a toddler, suffered from grand mal seizures. Prescribed Valium shortly thereafter but witnessing no improvement for nearly a decade, at12 years of age Kokkalis’ mother resorted to alternative treatments. Doses of probiotic enzymes, fasting and praying followed that choice, but preceded a turning point: her biggest seizure yet.

“After 37 days, I had one of the biggest seizures you can imagine,” she said. “I was in a coma for three days. I have not had a seizure since.”

If that experience didn’t plot her course on the map of life, a chance encounter with a French magazine – Kokkalis speaks Greek, Chinese and English fluently while dabbling in Latin-based languages –did. She had stumbled upon an article about acupuncture.

“The seizure (and her unique recovery) brought up my interest in wellness, specifically in solving the problem rather than just management of disease,” she said. “The magazine had a face in it with acupuncture needles, and that was intriguing. I decided that’s what I wanted to do.”

That revelation set off a whirlwind adventure for Kokkalis, one that took her to the heart of China in the midst of the Tiananmen Square revolution. After studying for seven years at the Beijing Medical University, during an additional two-year Chinese medicine program she was forced to flee the country.

The World Health Organization has officially recognized acupuncture as suitable for the treatment of more than 200 common clinical disorders including urogenital, gastrointestinal, immune system, gynecological, respiratory, circulatory, neurological, endocrine, emotional and pediatric disorders, along with addictions and fatigue.

She was not gone long.

“The Greek Embassy left Beijingand didn’t want their students supporting the government,” she said. “I didn’t want to get involved in Chinese affairs, but wanted to complete my program. I went back to China and said,‘I’m here and I want to study!’ They said, ‘You’re so determined but we don’t have any ties with your government. How are you going to study?’

True to her nature, she made it happen.

“I told them I wanted to be the bridge between East and West,”Kokkalissaid. “The Dean’s office gave me the equivalent of the scholarship I had. I finished with honors.”

These days, after stops in California and Minnesota, Kokkalis operates her Zionsville alternative care facility while living in Lafayette. She deals in acupuncture, electro-stimulation therapy, scar tissue treatment,herbal medicine and more to handle everything from bed wetting to cerebral palsy. She’s written papers, given lectures and the like, all with the focus of spreading the idea that Chinese medicine works – and has worked.

“Chinese herbs and medicine – the experience of those is documented for at least 5,000 years in the written word,” Kokkalis said.“There is no doubtthey are efficacious, because they’ve been used on billions of people.”

She’d like to open a clinic, and maybe write a book, that pull together all the elements of the best medicines and dispel myths aboutobscure practices, but those are in the distance at the moment. Right now,she’s focused on what she knows is right, and what she’s sure is wrong.

“Western medicine became a business; drug companies came around and lobbied the world,” she said. “Here, we manage a lot of diseases without solving them. Chinese medicine can turn it around.”