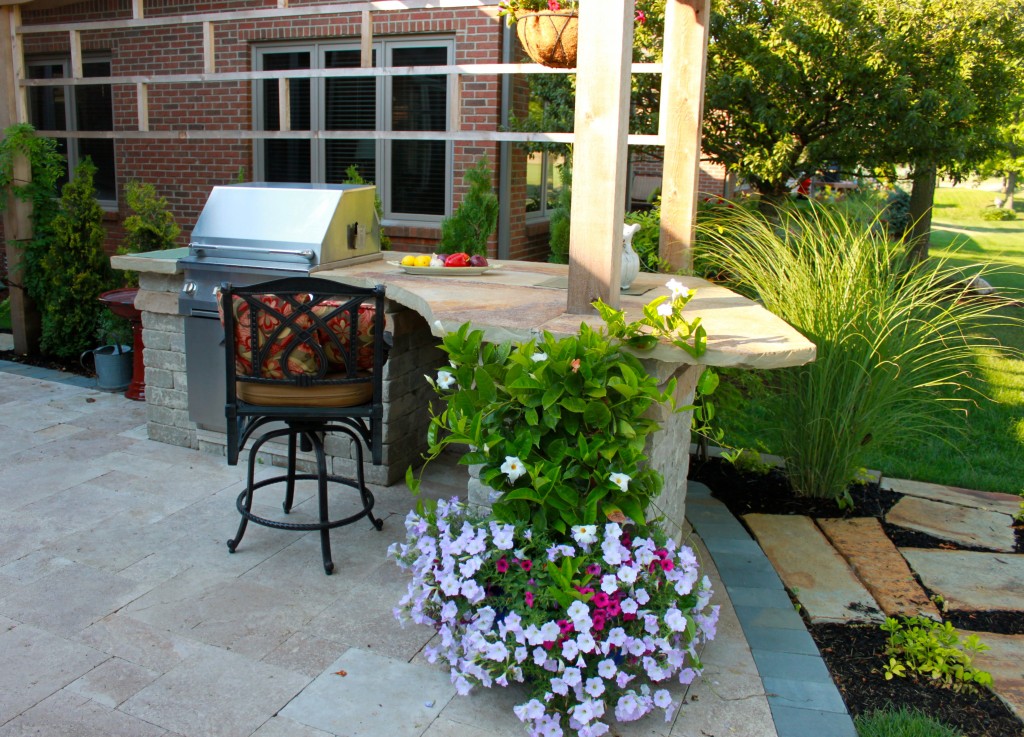 Michelangelo penciled his last design to guide seasoned stonecutters in the spring of 1563.  The frustration for the 88 year old was apparent by the blood red chalk used to convey his cutting instruction for the travertine blocks destined for the dome of St. Peter’s Basilica.

Imagine centuries later, this porous form of limestone remains a dynamic design material whose lasting historic structures have survived wars, famines and political statements.  It’s no wonder that Hoosiers are loving this earthy, distinctive porous, material.  Used by the Romans to construct temples, aquaducts, bath houses and even THE Colosseum, its’ renewed popularity is refreshing.

This daring back yard living space on Plum Creek Golf Course redefines luxury.  The smooth coolness of noche travertine laid in a classic French pattern is bordered by rich slate.  A natural stone seat wall and decorative column hugs the space and is capped with slate to echo the patio border.

While privacy was not a major concern, creating a subtle “buffer zone” was important to encourage a sense of intimacy.  The fashionable grill station was constructed out of manufactured stone and tastefully customized with a natural stone ribbon used in the seat wall.  Oversized curly sandstone slabs were employed to produce a natural counter that is humbly, magazine quality.

As usual, every ounce of shade is appreciated and the thin pergola growing from the grill counter offers a bit of respite.  The architectural window lattice supports a recently released, tame wisteria that promises to predictably bloom and magnetize hummingbirds.

There is something intuitive when both a client and designers dream merge. The vision for this space was bold and immediate.  Michelangelo said “I saw the angel in the marble and carved until I set him free”.