You are at:Home»Current in Zionsville»Swedish artist set to play G. Simone’s 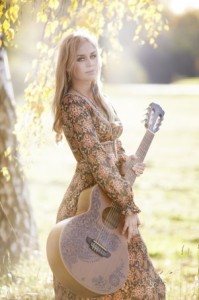 Singer-songwriter SofiaTalvik, a well-established artist in her native Sweden, will appear at The Cellar at G. Simone’s, 112C S. Main St., Friday July 20 at 8:30 p.m.

The show is part of Talvik’s current, two-year U.S. tour titled “Drivin’ and Dreaming.” The current leg of the tour comes on the heels of the January release of Talvik’s fifth studio album “The Owls Are Not What They Seem.”

Talvik, a veteran of festivals such as Austin, TX’s SXSW and Lollapalooza, combines modal chord changes and60’s euro-pop production with the gentle singing of a 70’s folk singer in the vein of Joni Mitchell, Nick Drake,Belle & Sebastian and Aimee Mann.

“No town is too small as long as there’s people there who want to hear my music,” Talvik says. “A lot of European artists only play in the big citieswhen they come to the U.S. because that’s what looks cool on their tourhistory, but I’m all about the grass root approach and about meeting thereal people of America.”

For more information on the show, call G. Simone’s at 873-5577. Talvik’s Web site is sofiatalvik.com.