You are at:Home»Lifestyle»Blueprint For Improvement»“New master bath with custom closet” 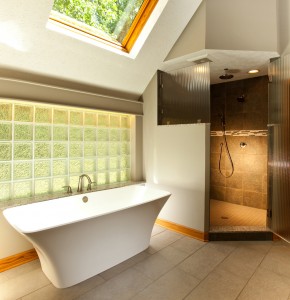 ORIGINAL BATHROOM: This home is located in the Woodacre subdivision on the west side ofIndianapolis. The homeowners built the house in 1990 and now that they are empty nesters, they are slowly remodeling the whole house to get it ready for eventual sale. They had already remodeled the kitchen so the master bath was next.

NEW SLEEK TUB: The owners commented, “The bathroom had a huge garden tub, and I like the sleek look of the new one. After having a garden tub for years, I wanted something different. The glass block behind the tub was a last minute change. I was having trouble finding a window treatment that I liked, and my designer suggested the glass block. We did not choose the most popular style. We did not have to be too concerned with the amount of light the glass block let in because we also have a skylight. We were able to choose the glass style even though it did not let in as much light as other styles. We also found that replacing the windows and getting new window treatments was actually going to cost more than the glass block.”

HUSBAND & WIFE DECISION MAKING:  The owners worked together with the design team on the selection of the materials. “My husband was in charge of the shower and I focused on the vanity areas. I wanted the vanity tops to be granite, but I did not want them to look like a kitchen, so that led me to my color choice. The plumbing fixtures were chosen to be sleek and modern.”

NEW CLOSET SPACE:  The homeowners noted, “My favorite part of the remodel is the closet. The old one had a loft that felt very dark and closed. Now the closet is bright and new, and I can see everything. We have many more shelves and the space has been opened up. It helped me organize my things.