You are at:Home»Current in Zionsville»Global clothing 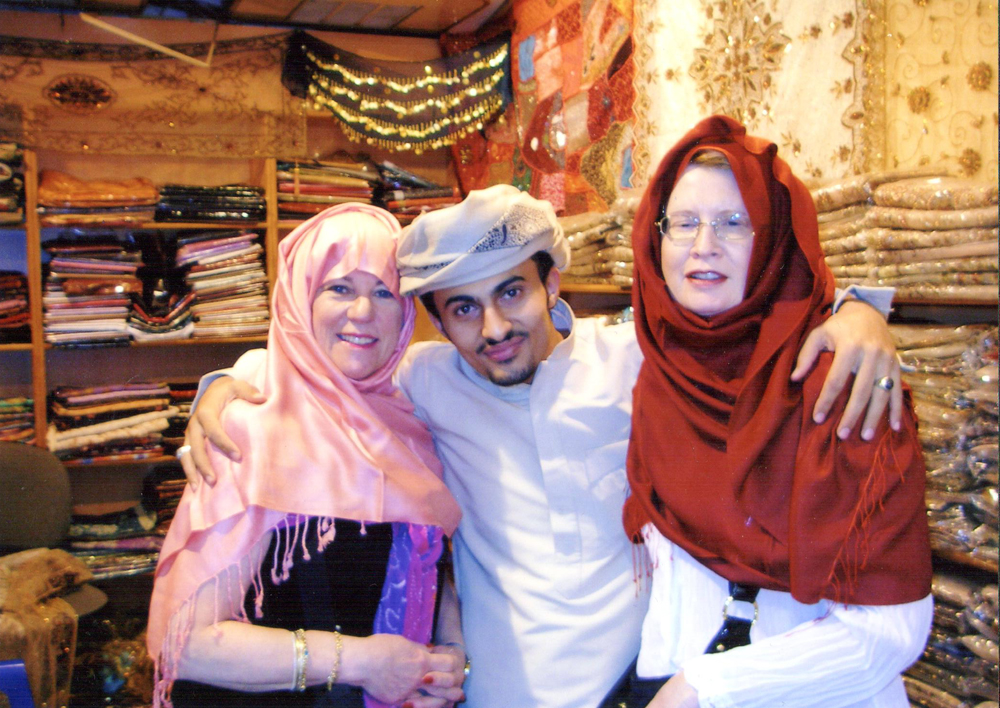 Carney (left) with a clothing dealer and friend in Dubai. (Right) An example of Lilly’s unique, wearable art clothing.

As a child, Joan Carney was surrounded by whispers of places far removed from her Milwaukee home; there was an ethnic street party outside her front door, the scent of neighbors’ foreign foods drifting through the Wisconsin air, the occasional trinket retrieved by her parents on a voyage afar as a gift for young Joan. 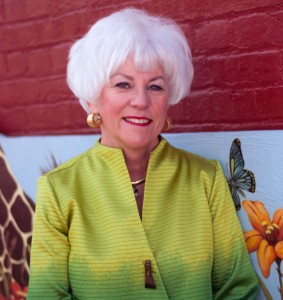 Carney, owner of Lilly’s Boutique Galleryof Zionsville – celebrating 20 years of business this month – may have a Boone County storefront and a Carmel address, but she searches all corners of the globe to make her business one-of-a-kind.

“I’ve traveled to Denmark, Dubai, Egypt, Finland, Greece, India, Turkey, the Caribbean, all over Europe and twice to Morocco,” she says of her two-decade search for clothing from exotic vendors. “I want wearable art from artisans of all kinds. I want clothes no one else has.” 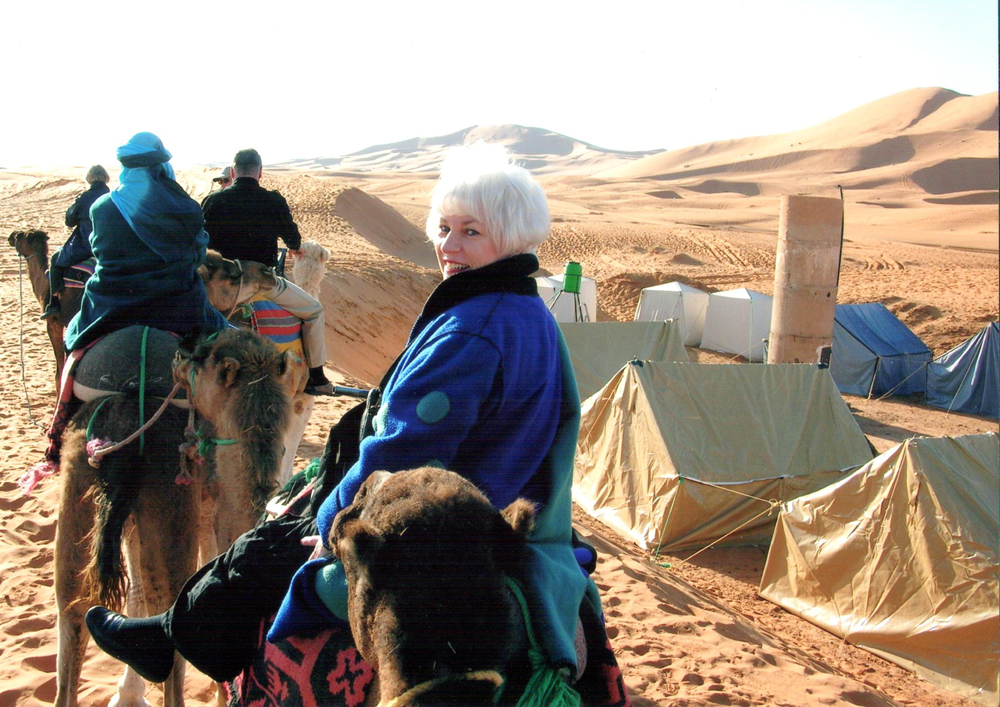 Its uniqueness is what set Lilly’s apart at its inception, and what still does today. So unique and new, in fact, was the first iteration of Lilly’s – at 40 W. Pine St. in Zionsville – that Carney recalls a case of mistaken identity the first day her store was open.

“Two older ladies poked their heads inside the door,” she remembers. “I had all the plants, and it was so colorful, and they said, ‘Oh my, Zionsville has a Halloween shop!’ I went in the back room and got sick.”

That day – April 7, 1992 – was the beginning of something very successful, despite the initial reaction.

“My worries didn’t last long,” Carney says. “Within two weeks, I was running up to Chicago to get more clothes because I was selling. I remember in 1993, I found designer jackets I loved that retailed for $1,000 each; I ended up selling 32 of those jackets. I had a really good following.”

Along with her flair for travel, Carney traces her love for clothing back to that Milwaukee childhood. Nicknamed “Lilly” by an uncle when she was very young, Carney had an older sister and thusly was the recipient of numerous hand-me-downs.

That just wouldn’t do. 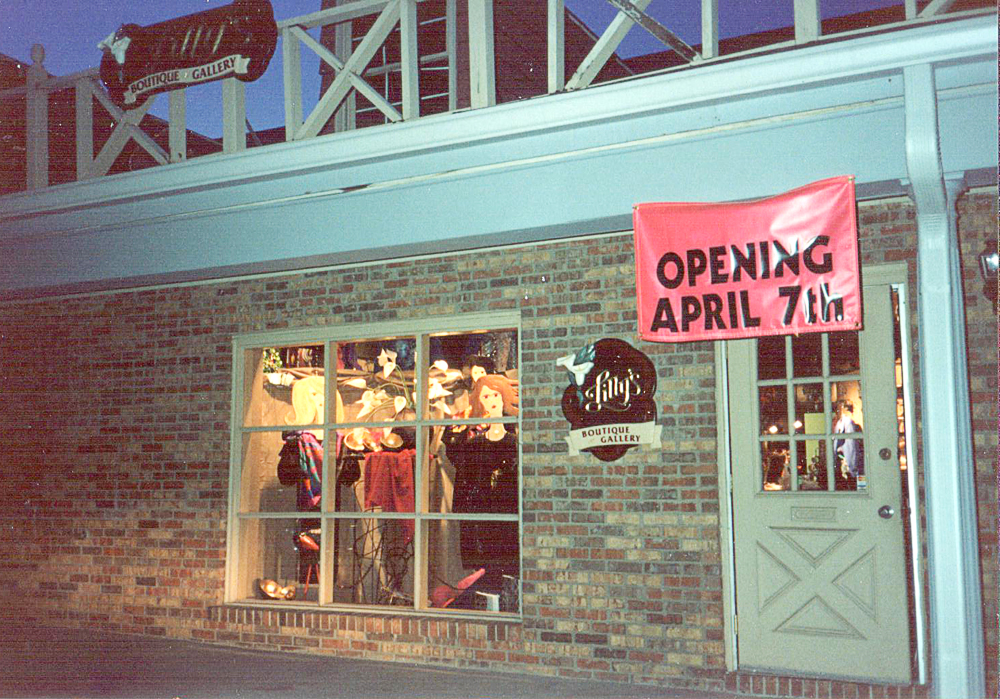 The original Lilly’s just before the grand opening.

“My sister’s taste and mine were never the same,” she says. “I got to the fourth grade and decided to take my babysitting money and apply it to fabric, and try to teach myself to sew. I was designing patterns, matching plaids and bright colors. I was quite shy, but I was expressing myself. That was my way.”

Carney credits her father – whose April 7 birthday was behind the selection of Lilly’s first day in business – for being a motivating factor behind the pursuit of her passion.

“He was the instigator of all this,” she says of her father, now deceased. “My parents were very intellectual, and I was the only arty one. My dad was promoting of my individuality, and that my talents were as good as anyone else’s. He was the cheerleader.”

That support system eventually spawned Lilly’s, which as the Midwest’s largest wearable art store, has seen clothing from more than 2,000 different vendors adorn its racks through the years.Carney routinely sees repeat customers from neighboring states and remarks that, despite the economy, business has been steady.

“It’s hard work, but it was my passion to introduce wearable art on a larger scale,” she says. “I buy timeless things, and every person that shops here should be able to afford artwork at his or her price point. I never dreamed I’d be in this position, but this has been my calling. I’ve made a livelihood.”

With 20 years in the books, is the day nearing when Carney will hang it up and focus on a different passion, interior design or gardening, perhaps?

“I don’t intend to retire,” she says.

Undoubtedly, there is more world to see.

More about Joan and Lilly’s

Joan Carney moved to Zionsville in 1989. Lilly’s was initially a way for Joan to meet people in the community, but became much more. Joan, who majored in art history and education at Marymount College in Tarrytown, N.Y.,saw her sewing days come to an end when she broke her back fleeing a house fire before her move to Zionsville. Joan resides in Carmel and has two adult sons.